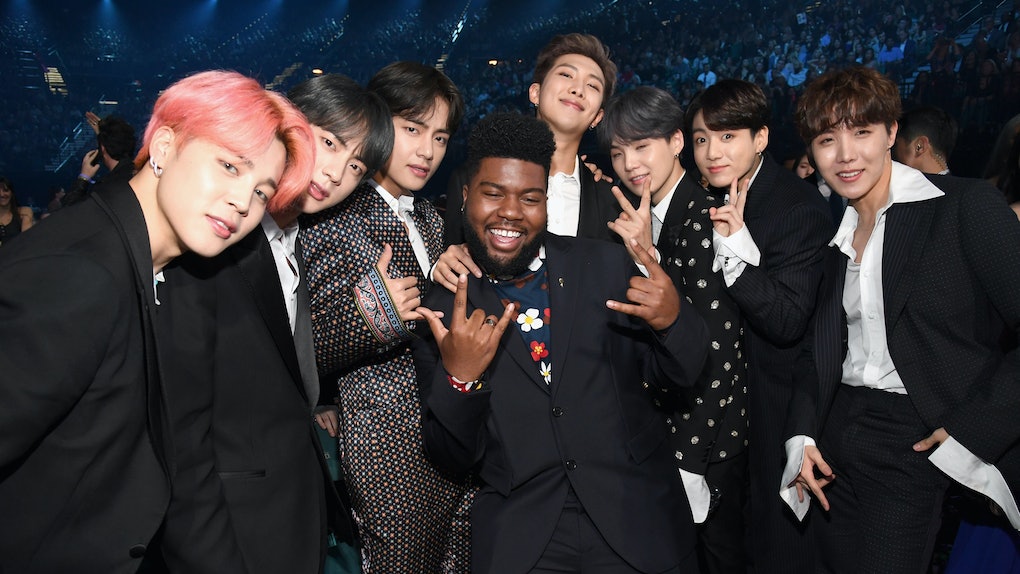 As every good ARMY knows, Khalid has been a huge fan of BTS for a long time now, and vice versa. I mean, they never fail to compliment each others’ work whenever new music is released, and you know what? I am completely here for everything about this supportive friendship! But the "Eastside" singer's devotion to the seven-member boy band definitely reached peak form on May 5, when he to went see the K-Pop crew perform live during their three-hour show at Rose Bowl stadium in Los Angeles, California. Have you seen the video of Khalid singing Jimin's "Serendipity" at BTS' concert yet? Khalid waving around an ARMY bomb while shouting out every word to the tune was legit a whole mood!

Like I said, Khalid's been a BTS stan for a long time. I mean, he gave "Serendipity" a shout out on Twitter back in August 2018. "I can't stop playing this," he wrote. "Sooooo good." BTS loves Khalid, too. Remember when J-Hope posted a video of himself on Twitter dancing around to "Outta My Head?" And then Khalid responded by challenging J-Hope to a dance battle? So epic.

Anyway, let's take a look at Khalid fangirling out over Jimin singing his solo track at the Rose Bowl, because trust me, it's all kinds of amazing:

So, so good, right? I mean, I am so here for everything that's happening in that clip, including Khalid saying, "This my sh*t" about "Serendipity."

Now, check Khalid out when he first rolled up to Rose Bowl for the concert:

Did you catch that huge smile? He's clearly so pumped to see the boys!

Here's another video of Khalid during the three-hour long Rose Bowl show, and this time he's enthusiastically waving around that ARMY bomb:

I just love how much fun he's having.

And finally, you have to see this clip of Khalid greeting BTS and giving Jimin a hug at the Billboard Music Awards on May 1:

I just can't with the cuteness!

Meanwhile, Khalid also hung out with BTS backstage, where they got real cute and posed together. Khalid later shared the pics from that super cool encounter on his Instagram, along with the succinct caption "Rose Bowl."

BTS later posted a similar image to their official Twitter feed, along with the caption, "Welcome friend!!"

Awww! I really, really hope this means we're going to be getting a collab from these two kings sometime soon!

Meanwhile, at the end of the show, Jimin presented the most heartfelt speech to the 60,000 screaming fans who had filled the sold-out stadium.

BTS will continue on through the U.S. leg of their Love Yourself: Speak Yourself tour, with two upcoming shows in Chicago and then two more in New Jersey.

Is Khalid planning to turn up at these concerts, too?