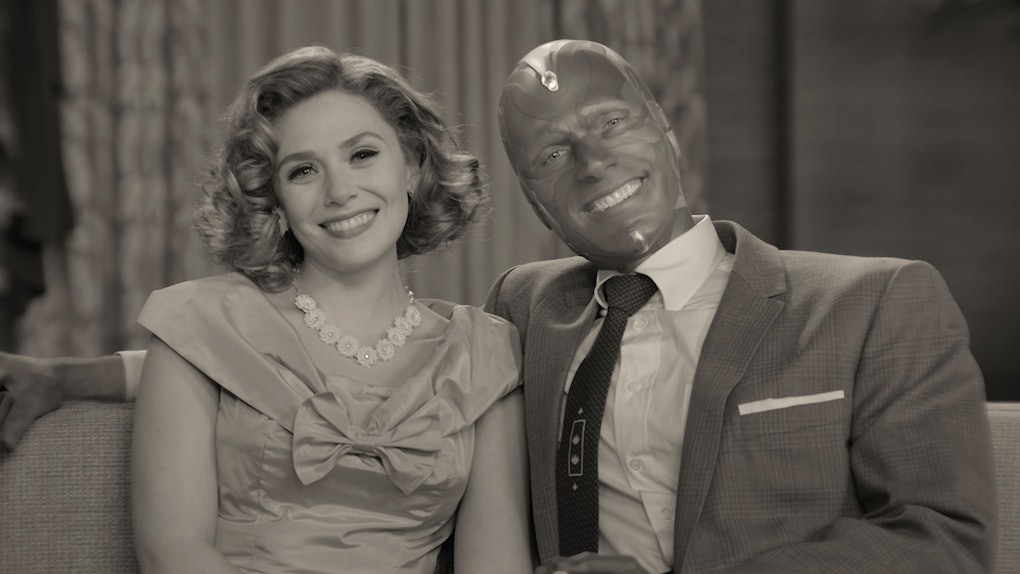 The Truth About 'Wandavision's Sitcom Universe Digs Into Wanda's Backstory

Throughout Season 1, WandaVision has stood out for its unique premise: What if two Avengers starred in their own family sitcom? Viewers eventually learned that Wanda Maximoff had created her own reality in which she and her Vision's lives paid homage to different eras of TV in each episode. But like, why? In Episode 8, WandaVision finally explained its sitcom universe, and it has everything to do with Wanda's backstory.

Warning: Spoilers for WandaVision Season 1, Episode 8 follow. Episode 8 picked up immediately after Agnes revealed she was actually the powerful witch Agatha Harkness, with Wanda trapped and powerless in her basement. Agatha was drawn to the Hex after sensing the massive amounts of energy emanating from it, but was shocked by how Wanda was able to create a complex reality when even simple "transmutation" is normally incredibly difficult. To try and uncover the secret to Wanda's magical feat, Agatha forced her to relive the traumatic moments that led her to make the Hex in the first place.

First, they watched a flashback of young Wanda and Pietro living with their parents in war-torn Sokovia. One of the Maximoff family's major sources of comfort was watching VHS tapes of various shows like Bewitched and Malcolm in the Middle on "TV night," which helped teach the kids English. Young Wanda was particularly fond of sitcoms; during the flashback she chose a Dick Van Dyke Show episode that closely paralleled WandaVision's first episode.

But just as the Maximoffs settled in to watch the episode, a Stark Industries bomb landed on the apartment, killing the twins' parents. But the Dick Van Dyke Show episode continued playing in the rubble, and little Wanda whispered, "At the end of the episode, you realize it was all a bad dream."

Never again did Wanda's life resemble the comforting shows she loved, but as the other flashbacks Agatha forced Wanda to watch showed, she continued to turn to American sitcoms as a source of comfort. While she was being experimented on in a pre-Avengers: Age of Ultron Hydra facility, she watched The Brady Bunch. And later, when Wanda was living in the Avengers compound circa Avengers: Civil War, she and Vision watched Malcolm in the Middle together as he helped her process her grief over Pietro's death.

Cut to the post-Endgame, when Wanda arrived at S.W.O.R.D. headquarters to retrieve and bury Vision's body. As it turned out, she didn't steal Vision's body like Director Hayward claimed she did in Episode 5. Instead, she learned Hayward and his team planned to bring Vision back and use him as a weapon (exactly what he said he didn't want to happen). Wanda attempted to use her magic on Vision's body, but tearfully admitted, "I can't feel you."

So, she left S.W.O.R.D. even more heartbroken than before and drove to Westview, New Jersey, where she and Vision had purchased a spot for their suburban dream home. The weight of seeing where she and Vision could've built a life was too much for Wanda, and she fell to the ground, crushed by grief. Suddenly, power exploded out of her, fueled by both her newfound witchy abilities and her Infinity Stone-based powers. The force of it created the Hex, a world in which she and Vision could live out the idyllic sitcom lifestyle she clung to throughout all the trauma she'd endured.

But now with Hayward and Agatha after her, it seems like Wanda's perfect world is about to come crashing down for good. To see how it all wraps up, catch the WandaVision Season 1 finale on Friday, March 5, on Disney+.