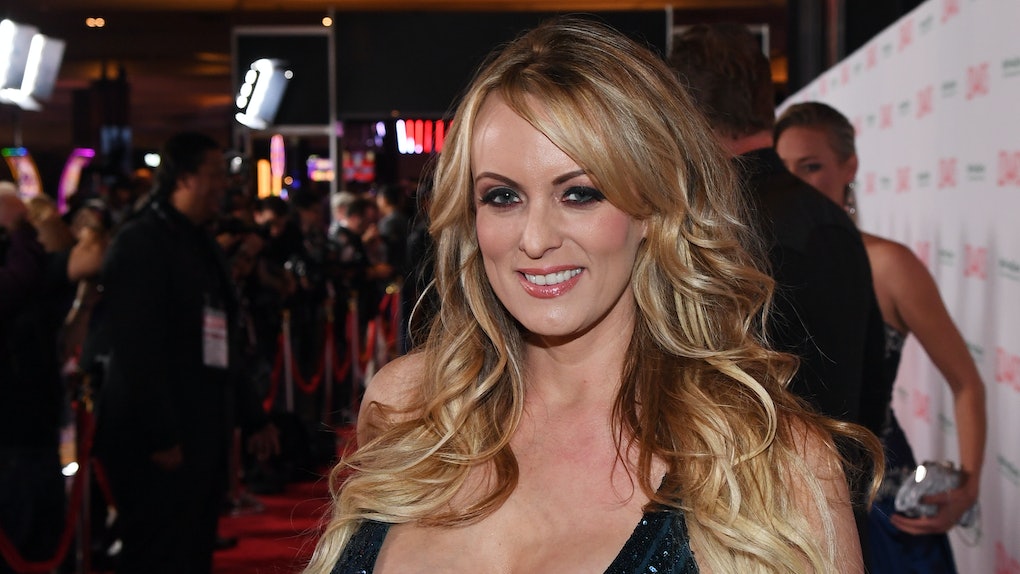 There has been more than enough news circulating around the president and his administration in recent weeks to keep the entire country busy. But a case brought against Donald Trump by an adult film star may have slipped some radars. If you haven't gotten caught up to speed, it's worth looking at. There are a number of reasons you should pay attention to Stormy Daniels' case against Trump.

News reports from January 2018 claimed that Daniels, whose real name is Stephanie Clifford, had been paid to keep quiet about an affair she'd reportedly had with Trump in 2006, while he was married to Melania. Daniels discussed the reported affair in-depth in a 2011 interview with InTouch.

A report by the Wall Street Journal showed that in the final days leading up to the 2016 presidential election, Trump's attorney Michael Cohen paid Daniels $130,000 to sign a non-disclosure agreement, preventing her from coming forward and speaking out about their affair. The White House denied the rumors of an affair and a payment, calling them "old, recycled reports, which were published and strongly denied prior to the election," while Cohen himself refuted the reports that Daniels and Trump ever had an affair. A letter allegedly signed by Daniels dated Jan. 10, 2018, calling the rumors of an affair "completely false," seemed to counter her own account to news outlets. Cohen admitted to paying Daniels, although he said it was "a private transaction" and that he did so using his own money, without involvement from the Trump Organization or the Trump campaign.

But the conflict didn't end there. On March 7, Daniels' attorney Michael Avenatti filed a lawsuit in the state of California against Trump, on the grounds that the alleged "hush" agreement was "null and void" given that it was reportedly signed by Cohen and not Trump himself. In the days since, numerous points about the case have come into clear focus that are worth looking at more closely.

In response to news of the lawsuit against Trump, the White House confirmed that legal conflict had already taken place. "This case had been won already in arbitration, and there was no knowledge of any payments from the president, and he has denied all these allegations," said White House Press Secretary Sarah Huckabee Sanders in a press briefing on March 7, per Politico.

Speaking on MSNBC's Morning Joe in an interview Friday, March 16, Avenatti claimed that Daniels was threatened with physical harm in the fallout from the media coverage around her affair and lawsuit against the president. Elite Daily reached out to the White House about this report but did not hear back at time of publication.

Avenatti claimed this in an interview with CNN's New Day, telling host Chris Cuomo on Friday, "My client was physically threatened to stay silent about what she knew about Donald Trump."

Avenatti said he couldn't "confirm or deny" whether the alleged threats came from Trump or someone close to him, and didn't say whether he or Daniels had filed a police report in response to the threats. He promised more details in an upcoming 60 Minutes interview with Daniels on March 25.

No matter where the alleged threats originated, if Daniels was threatened, it adds another layer to the story that shouldn't go unnoticed.

Daniels may not be alone.

Avenatti claimed to CNN New Day on Friday that six more women have approached his firm with cases similar to Daniels'. While he stressed that they have yet to conduct a thorough vetting or take on these cases, the initial intakes with these six women suggested they were legit.

In an interview with MSNBC, Jonathan Turley, a George Washington University law professor who knows Avenatti, said that the lawyer is careful about making claims. "The Michael I know would not be making any allegations that he couldn't back up," he added.

It wasn't clear from Avenatti's statement that these six women were separate from those who have already come forward alleging sexual misconduct by the president, as details of the cases weren't disclosed. (The White House has said that the women making claims of sexual misconduct against Trump are lying.) But Trump's previous accusers alleged instances of sexual harassment or assault, while Daniels' case pertains to a purported affair. If, in fact, the women who approached Avenatti have cases similar to Daniels', it's entirely possible that these would mean new allegations unrelated to those already made. Elite Daily reached out to the White House for comment on these alleged additional cases, but did not hear back at time of publication.

Like Daniels, at least two of the six women who've approached Avenatti, he claims, also had signed non-disclosure agreements, which he reviewed.

Avenatti is confident he's got something on Trump.

Cohen claimed that he alone made the payoff to Daniels — even using his own money — and that the president was in no way involved.

Avenatti called Cohen's argument "laughable," adding, "We're going to prove that Mr. Cohen is not telling the truth about this," he claimed to CNN on March 9. When asked how he'd prove it, Avenatti responded, "We're going to be able to obtain discovery, and documents, and testimony, that's going to show, I am highly confident, that at all times Mr. Trump knew exactly what was going on." Avenatti added that Trump's attorney would have had an obligation to inform him, as a client, of what he was doing. Elite Daily reached out to the White House for comment on this claim, but did not hear back at time of publication.

"The President and Mr. Cohen have purposely ignored our settlement offer, thus doubling down on their efforts to muzzle Ms. Clifford and prevent her from telling the American people what happened," read a March 13 tweet from what appears to be Avenatti's account. "Time to buckle up."

And Avenatti's track record makes him a formidable enemy for the Trump team to take on.

Avenatti is no joke.

As a lawyer, Avenatti has taken on some high-stakes cases and has a pretty impressive résumé to back it up, winning over $1 billion in settlements and verdicts over his career.

On Anderson Cooper 360, Avenatti said he was "ecstatic" at the prospect of having "a street fight" with the president over the Daniels case. "I'm looking forward to the next two, three, four, five years, however long it takes. ... They need to bring it, and we're gonna bring it."

Turley said of Avenatti, "He's highly intelligent, he's highly aggressive, and he's highly professional. He's the type of guy you want in your corner when things get rough."

Daniels is part of a larger pattern.

Daniels — and as many as six more women whose stories may come to light — is one piece of a larger picture of the president and his treatment of women.

Let's not forget all the other women who have made serious allegations against the president. As of December 2017, a total of 19 women had accused Trump of some form of sexual misconduct, per a December 2017 Atlantic article. One of his accusers, Summer Zervos, has taken the president to court, suing him for defamation on the grounds that he denied her allegations of sexual misconduct about him. what has the trump camp said about the lawsuit?

While the Daniels case is fundamentally different from other allegations, a win for Daniels would be a big deal in the larger context, where a massive number of women's stories and claims against the president have been met with denial.

Allegations aside, there are plenty of well documented instances of Trump saying some fairly unsavory things to women, even after taking office. Daniels' case, if successful, would be a PR nightmare for the president and his administration. The hearing is scheduled for July 12 in Los Angeles.