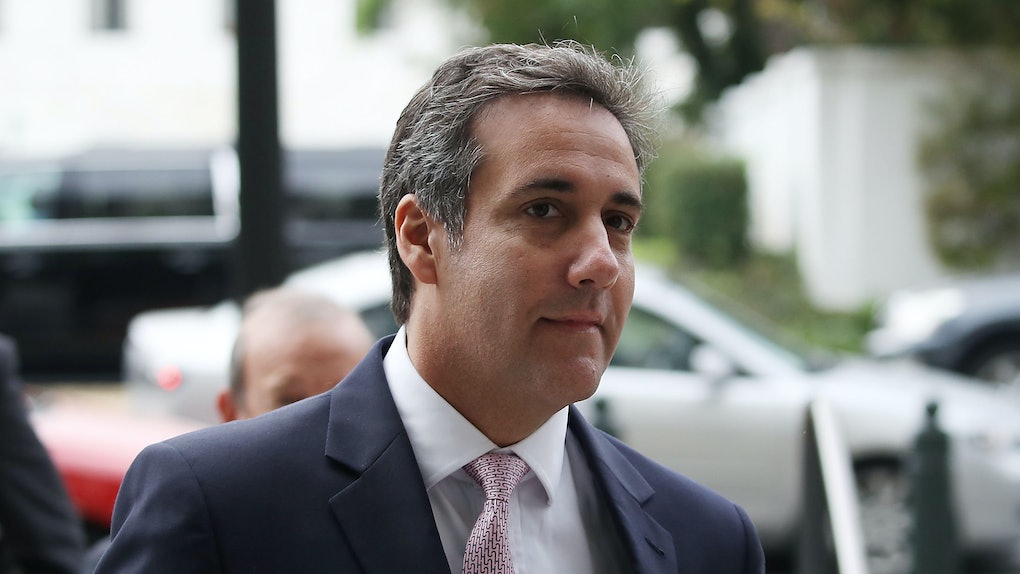 Donald Trump's Lawyer Claims He Paid Stormy Daniels $130,000 Of His Own Money, & Yikes

On Tuesday, Feb. 13, President Donald Trump's lawyer, Michael Cohen, claimed that he paid Stormy Daniels (legal name Stephanie Clifford), an adult film star, $130,000 in October 2016, a week before the presidential election, as reported by the New York Times. The claim comes just over a month after The Wall Street Journal reported that Cohen initiated the transaction in exchange for Daniels' silence on an alleged affair between herself and Trump. Crucially, though, Cohen did not state the reason for the payment, thus falling short of completely corroborating The Wall Street Journal's report that the six-figure sum was, essentially, hush money.

In his Feb. 13 statement, Cohen simply labeled the payment "a private transaction" that he paid out of his own pocket.

News of Cohen's admission was first reported by New York Times White House correspondent Maggie Haberman. "Neither the Trump Organization nor the Trump campaign was a party to the transaction with Ms. Clifford, and neither reimbursed me for the payment, either directly or indirectly," Cohen said in a statement, according to The Times. "The payment to Stephanie Clifford was lawful, and was not a campaign contribution or a campaign expenditure by anyone."

Elite Daily has reached out to both Trump's team and Stormy Daniels' team for comment, but has not heard back by the time of publication.

A week after The Wall Street Journal published its initial report claiming that Cohen facilitated a payment to Daniels, the paper published another story about the specific method of payment used to complete the transaction. That second story from The Journal reported that Cohen set up a Delaware limited liability company (LLC) to funnel the $130,000 payment to Daniels' legal representative.

In response to The Journal's reports, the lawyer had previously denied elements of the stories.

In a statement on Jan. 12, Cohen refuted the idea that President Trump had an affair with Daniels years before his presidency. "These rumors have circulated time and again since 2011. President Trump once again vehemently denies any such occurrence as has Ms. Daniels," the statement said.

Cohen sent media outlets a separate statement on Jan 10, this one signed by Daniels herself. The statement says Daniels' involvement with Trump is "limited to a few public appearances," and that rumors about their alleged sexual affair are "completely false." Despite the fact that the statement signed by Daniels states, "Rumors that I have received hush money from Donald Trump are completely false," Cohen's statement to The New York Times corroborates reports that the adult film star was paid by a Trump representative.

Cohen's statement to The Times' does, however, claim that Trump himself had nothing to do with the transaction. The statement from Cohen appears to have been prompted by a complaint made by Common Cause — a non-profit, government watchdog group — to the Federal Elections Commission.

“The complaint alleges that I somehow violated campaign finance laws by facilitating an excess, in-kind contribution,” Cohen said in his statement to The Times. “The allegations in the complaint are factually unsupported and without legal merit, and my counsel has submitted a response to the FEC.”

A day after The Wall Street Journal reported Cohen used an LLC to pay Daniels, In Touch magazine released the transcript of a 2011 interview in which Daniels is quoted with in-depth details about an alleged affair with Trump. In the interview, Daniels is quoted as saying that the affair took place in 2006, a short time after now-First Lady Melania Trump gave birth to son Barron.

"At the time, I didn’t think that much about it. But now that I have a baby that’s the same age that his was at the time, I’m like, 'Wow, what a d*ck,'” Daniels is quoted as saying in the transcript.

Another portion of the transcript quotes Daniels as describing Trump's reaction after she mentioned Melania Trump. "I mentioned her. I was like, 'Yeah, what about your wife?'" Daniels is quoting as asking on the night she first had dinner with Trump. "He goes, 'Oh, don’t worry about her.' Quickly, quickly changed the subject."

Despite the statement signed by Daniels — and provided to media outlets by Cohen — denying an affair with Trump, Stormy Daniels did not deny the affair during a subsequent television interview. The White House's spokespeople have denied the affair on behalf of the president.