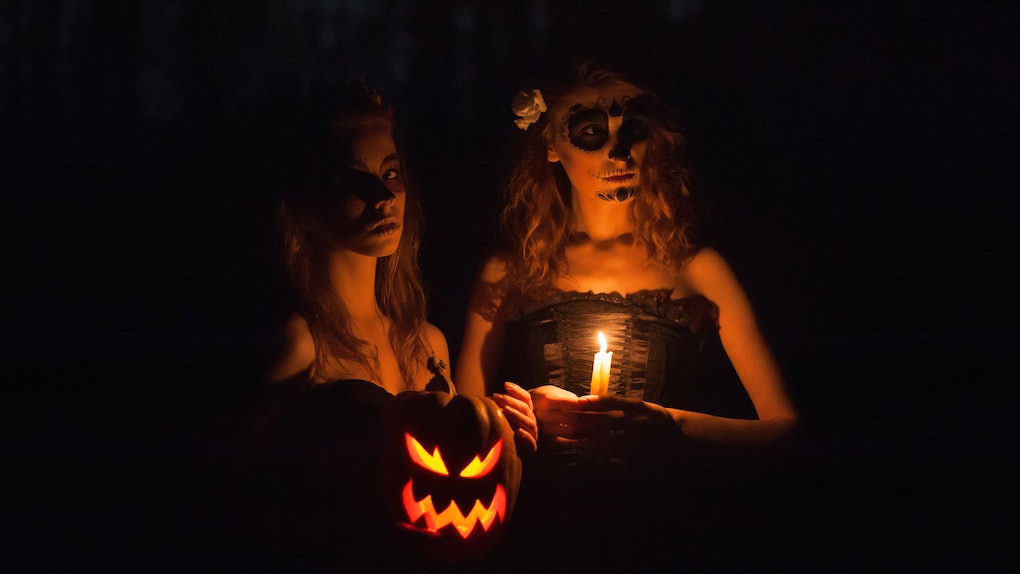 This year has been nothing but back-to-back shocks, and although it's been collectively cathartic, the irony of there also being a full moon on the spookiest night of the year is hardly unfathomable. Looking at this from an astrological perspective, the spiritual meaning of the Halloween blue full moon 2020 will be more tricks than treats, to put it mildly.

The full moon is a mystical gift from Mother Nature, and a stellar vision people all over the world look forward to on a monthly basis. Combine this with what most consider to the most epic holiday of the year, who wouldn't be happy as a clam? A full moon on Halloween is the final touch to the enchanting Celtic celebration of Samhain. It's almost too perfect — at least aesthetically speaking.

Happening on Oct. 31 at 10:49 a.m. ET, the 2020 full Hunter's moon is also considered a blue moon, which is something else that makes this lunation to incredibly rare. According to the Farmers' Almanac, people have referred to the second full moon that occurs within the same month as a blue moon for more than half a century.

The Full Hunter's Moon On Halloween 2020

In the spirit of all things spooky, energy speaks louder than words, and astrology proves there are synchronicities beyond your imagination. In the case of Halloween, for instance. What are the odds that this holiday happens takes place right in the middle of Scorpio season? Governed by powerful Pluto — Lord of the Underworld, and planet of death, sex, taboo, transformation, and everything lingering beneath the surface — Scorpio is the perfect hybrid of the darkest dark and the lightest light. There are no gray areas when it comes to this fixed water sign, which is why its polarizing energy is so difficult to comprehend.

Whether you celebrate Halloween or honor the dead at Samhain, Scorpio season is the time to do so. According History, Samhain was celebrated from Oct. 31 through Nov. 1 as a way of welcoming in the harvest, and the darker half of the year. The Celtics believe it's the only day in the year where the barriers between the physical world and the spirit world can be dissolved. Please note: This is all very important to keep in mind during this lunation. Full moons are powerful on their own, so when you integrate the rarity of it also being a blue moon, on the eeriest night of the year, it means something.

Full moons are a call for balance. The moon — symbolic of the divine feminine — sitting proudly across from the sun — a symbol of the sacred masculine and the greatest source of energy — is powerful beyond words. This is precisely why full moons are so climactic and revealing. This lunar phase never ceases to bring what's hidden to light. and with the sun in Scorpio — symbolic of the underworld — opposing the moon in Taurus — a representation of Mother Earth — this lunation is speaking to the cycle of life and death.

To top it off, this full moon will also conjunct Uranus, at the exact same degree, so shocking is an understatement. The "Great Awakener," and the planet of chaos, revolution, and unexpected change, it's safe to say that the shocking revelations stemming from this full moon will make history. Just because you can't see something doesn't mean it isn't there, and this year's full (blue) moon conjunct Uranus on All Hallow's Eve will prove it.