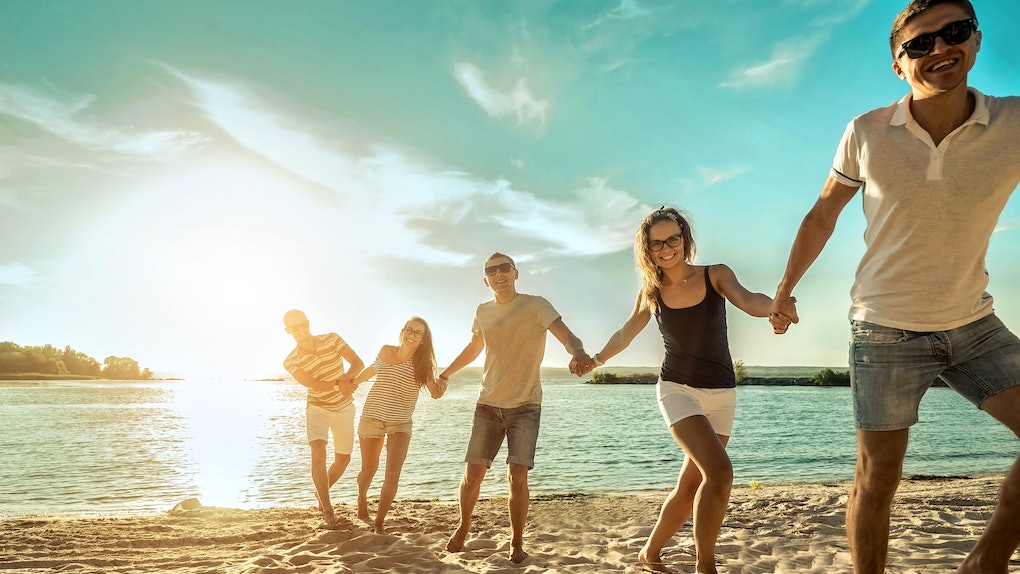 Every full moon has a unique essence and symbolism. It all depends on which zodiac signs the sun and moon are traveling through because both luminaries directly oppose each other during this particular moon phase. Interestingly enough, this is why the spiritual meaning of the full moon in Aquarius can be just as personal as it is universal. Think about it: The sun will beam through flamboyant Leo which, in turn, fully illuminates the moon in rebellious Aquarius. Ultimately, both energies go hand-in-hand — the sun being the ego and physical identity, and the moon being one's emotional instincts and inner foundation.

One thing's for sure: The sun cannot exist without the moon and vice versa. What's even more mind-blowing is, both of these heavenly bodies naturally emanate a powerful frequency capable of influencing the ocean tides, along with the water that already exists within our bodies. Fun fact: Up to 60 percent of the adult human body is made of water, according to the United States Geological Survey. If you're wondering what this means in this case, let me pose a couple questions for you first: Have you ever noticed that people can seemingly be extra sensitive during the full moon phase? Or why everything can feel more intense than usual? Nothing is coincidence — if anything, this goes to show you we are all made of what I call "star stuff" after all.

With the moon in Aquarius and the sun in Leo, the energetic theme has everything to do with the heart vs. the mind. Which one is speaking louder? Can you guess which belongs to which? Remember, the sun sheds light on your physical surroundings and identity, while the moon evokes your innermost feelings. With the sun in big-hearted Leo — sitting with Mars and Venus — there's a strong emphasis on the self.

For instance, Mars in Leo is courageous, self-assured, and incredibly passionate; this energy serves as a reminder to take action with pride and authenticity. Meanwhile, the essence of Venus in Leo is highly similar, with the exception that it utilizes Leo's fixed fire via financial exchanges and the goddess Venus' personal favorite in the love department. At the same time, the sun — Leo's planetary ruler — continues to energize and revitalize the fire.

Imagine it's this cluster of heavenly bodies — in the sign of playful Leo — that will be sitting directly across the full moon in Aquarius. Now, I don't know about you, but I personally like to visualize the planets during important transits like this. And after astro-analyzing the celestial energies stemming from this month's lunation, I couldn't help but notice Leo has stolen the spotlight once again, and I am not disregarding the energy of Aquarius.

On the contrary, there's only one full moon in Aquarius per year, but there's no denying the facts either. With three planets sitting together in the sign of Leo, there is a strong emphasis on the ego. So it's very important to keep that in mind during this time. For starters, don't let your desire for recognition and praise get the best of you. Focus on your heart's desires and start reflecting on how you can share your authenticity with the rest of the world.

In the eyes of Aquarius — a representation of rebellion, innovation, technology, and collective consciousness — the whole is greater than the sum of its parts. Uranus-ruled Aquarius is a symbol diversity and humanitarianism; it is the sign of the individual and of the community. Similar to the sun and the moon, the individual cannot exist without its community and vice versa. The essence of Leo is asking you to open your heart, while Aquarius helps you tap into the universal mind.

You have a unique purpose in this lifetime and it's time you see it for yourself.