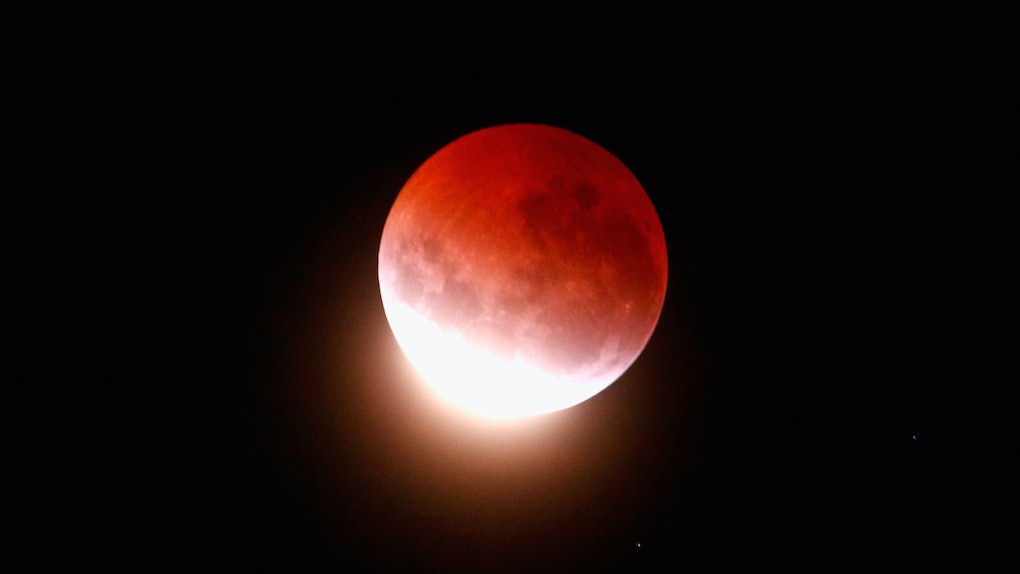 Our lunar cycle is a relatively reliable aspect of life. It begins with a new moon, spreading darkness throughout our sky and wiping the world clean for a fresh start. It climaxes in a full moon, bringing culmination to our intentions with its bright and round light, then it wanes backwards once again. However, once in a while, a hauntingly beautiful glitch upsets the system. This glitch is otherwise known as a total lunar eclipse. Tinging our night with its eerie red glow, it makes you wonder about the spiritual meaning of the blood moon 2018, especially when there's one coming up on July 27, 2018.

This total lunar eclipse intensifies the effects of the full moon in Aquarius with infinite power. While full moons aren't uncommon and blood moons aren't unbelievably rare, the fact that this will also be the longest lunar eclipse of the 21st century should prove its importance. Lasting a whopping 103 minutes, it is the harbinger of one the most intense transformations we've undergone in the last 18 years. Because that's just what a total lunar eclipse does. It brings significant change to our lives.

During the partial solar eclipse in Cancer that took place on July 12, you likely received cosmic revelations about your life that are nudging you toward making a positive difference for yourself. On the eve of the total lunar eclipse in Aquarius, you'll realize what needs to be gained in order to make your dreams happen. Unfortunately, you'll also learn what must be lost.

All full moons naturally bring your shadow self out to play. All the thoughts and feelings tucked tightly away in your subconscious float to the surface, and everyone becomes more volatile, sensitive, and emotional. When a total lunar eclipse is a full moon multiplied by a million, tensions begin swarming our world long before it even begins and the energy ebbs away long after it's over. This lunation doesn't simply change your mind, it changes your entire world. With so many intense metamorphoses going on, who can blame you for being over the top?

When the blood moon will also be forming a stressful conjunction to Mars — ruler of aggression, sexuality, and vigor — while it's in the middle of retrograde, you can expect energies to clash, crumble, and consume one another.

The Ending Of A Chapter In Your Life

As the blood moon comes to a close, you'll begin to feel your feet dangling over the spiritual edge, your intuition spilling you harsh truths, and the sensation that something big is about to happen. And let me tell you, lunar eclipses never lie. Whether you're ready for it or not, a blood moon will shove you toward change, and change never happens without the loss of something else.

Relationships, projects, careers, and beliefs are known to come to an end on an eclipse. What survives the purging of this blood moon is meant to remain in your life (at least for now). I'm sure you have a few stories as such if you do some digging. For example: last year, my best friend decided it was time to leave her boyfriend on a lunar eclipse. As for me, that same year's total solar eclipse let me know that I needed to quit my job soon and focus on my writing.

If the changes that the blood moon brings leave you feeling helpless, anxious, or afraid, it doesn't mean that the change was wrong. If you look back on horrible events in your past, such as breakups, job terminations, and financial ruts, hopefully by now you realize that these events ultimately had a purpose, as they took you on a whole new adventure that would otherwise never have happened.

This lunar eclipse will be in the progressive zodiac sign of Aquarius, ruled by Uranus — planet of revolution, inspiration, and of course, change. With so much compounded energy forcing you to let go of something futile and rapidly embrace all the various new opportunities you have, it's time to trust in the cosmos.

It Will Bring You Closer To Your Ultimate Destiny

Although change is never easy, you will receive pockets of understanding during the emotional mayhem of the blood moon. These pockets of understanding will allow you to see where the path you're now moving on leads up to. There is something incredible waiting for you on the precipice of your destiny. As frustrating as it is, the road to your fullest potential is not straight, nor is it smooth. It bends, breaks, swerves, and crashes. A blood moon is merely a manifestation of that crash. Luckily, it is a crash you were always meant to survive.