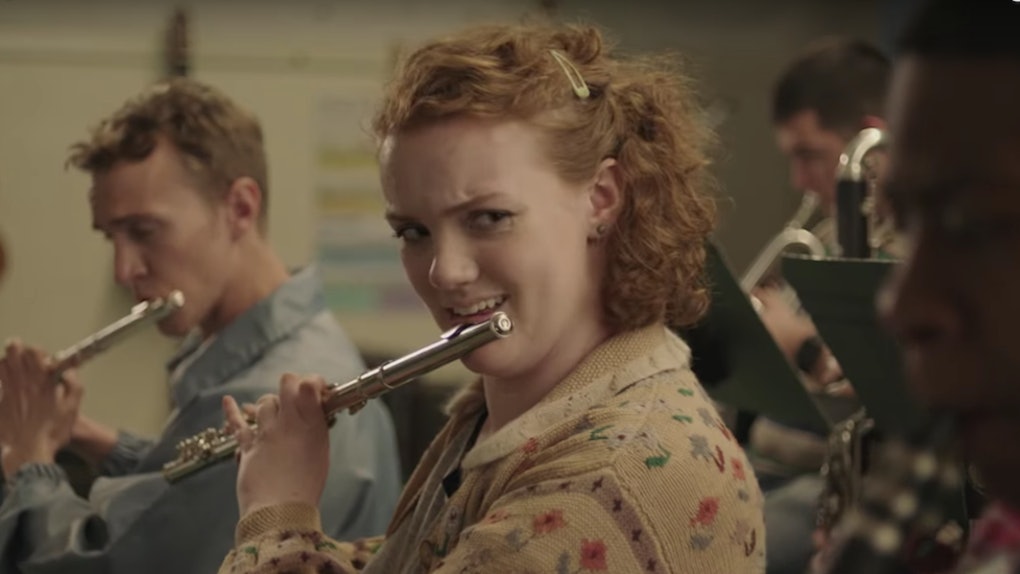 Shannon Purser is a breakout star, but her most iconic characters usually end up getting a pretty raw deal... up until now, that is. Purser's new Netflix movie is a teen rom-com called Sierra Burgess Is a Loser, and it promises to allow Purser's character to finally overcome the high school outcast role, which her characters of Barb in Stranger Things and Ethel in Riverdale were never able to do. The Sierra Burgess Is a Loser trailer proves it's the #JusticeForBarb movie that we deserve.

The new movie stars Shannon Purser as Sierra Burgess, a Stanford-bound, flute-playing, SAT-acing high school senior who takes the time to nitpick her bullies when they mix up Lord of the Rings and The Hunchback of Notre Dame in their insults. As you are probably able to deduce, Sierra Burgess is not exactly the most popular girl at her school. In the beginning, it's a role that viewers have seen from Purser before — her breakout role as Barb on Stranger Things was also a nerdy high school outcast. Unfortunately, Barb was unceremoniously killed off before she could find any sort of realization about her social status, but Sierra Burgess doesn't have to worry about inter-dimensional monsters killing her.

Instead, Sierra Burgess finds herself in caught in an intricate web of lies. A technological nod to Cyrano de Bergerac, Burgess enters into a text-based relationship with the school jock Jamey, who assumes that he is speaking to the popular cheerleader Veronica. Desperate to continue the dishonest relationship, Burgess continues to catfish Jamey, and even enlists Veronica's help in exchange for some tutoring and homework help. Obviously, the truth is going to come out eventually, and it is not going to be pretty when it all comes to light.

Check out the trailer for Sierra Burgess Is a Loser below:

The new movie marks another notch in Shannon Purser's continuing relationship with Netflix, and adds another teen rom-com to Netflix's recent boom in original releases within the genre. In the past few months, Netflix has garnered attention for its string of audience-pleasing YA rom-coms, including Set It Up, The Kissing Booth, and Alex Strangelove.

When the Sierra Burgess Is a Loser trailer dropped on Wednesday morning, Shannon Purser shared on Twitter that she filmed the movie over a year ago, which could mean this was actually Purser's first film role after making a name for herself on Stranger Things in 2016.

The new movie will also be very cathartic for Stranger Things fans who joined the #JusticeForBarb social media movement after Shannon Purser's character became an unexpected fan favorite prior to her early death. Barb (and Purser by extension) quickly became a pop culture fixture, even securing Purser an Emmy nomination for Outstanding Guest Actress in a Drama Series, which she wound up losing to The Handmaid's Tale's Alexis Bledel. The intense fandom also helped influence the show, as showrunners the Duffer Brothers said they made sure Season 2 of Stranger Things included a thorough investigation into Barb's death to help assuage the fans.

Sadly, Barb does not seem to be coming back to life (you never know with sci-fi shows, though), but her spirit lives on in Sierra Burgess. All those Barb fans out there should be pretty excited for a movie starring Shannon Purser as a very Barb-like character who doesn't get killed right away, and who has a chance to stop looking at herself as a loser and get the happy ending she deserves for once. Maybe we can just pretend this is the Upside Down world that Barb went to, instead of being killed?

Sierra Burgess Is a Loser will premiere on Netflix on Sept. 7.