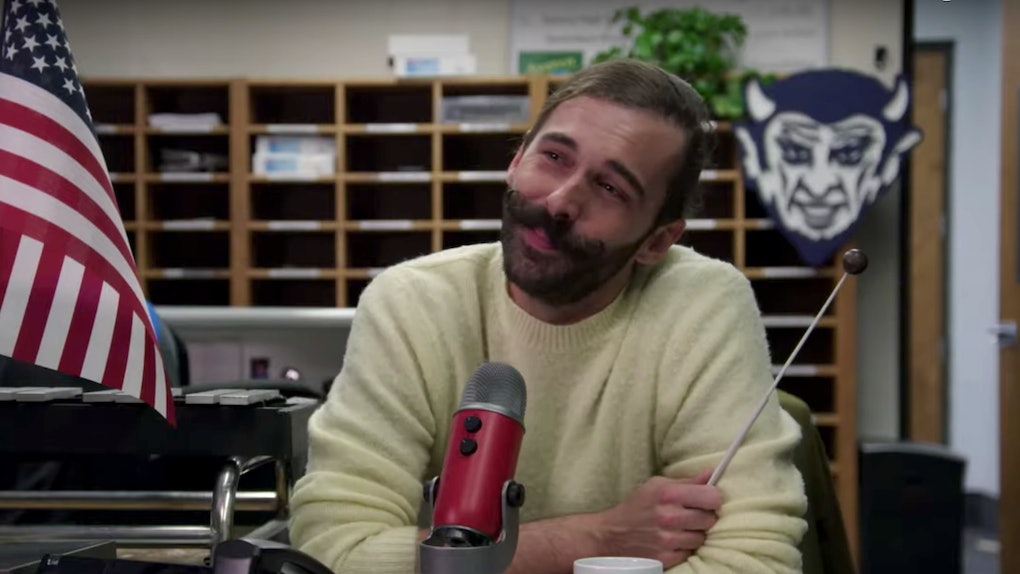 Get ready for more life-changing transformations and tear-inducing emotional moments, because a brand new season of Queer Eye is only a few days away. And to get fans even more excited for the upcoming fourth season of the make-over series, Netflix has dropped the new season's trailer, giving us a sneak peek at the new heroes and an extra special episode for Jonathan Van Ness. The Queer Eye Season 4 trailer reveals that the Fab Five will travel to Jonathan's high school for one of the new episodes this season.

The new trailer shows fans some of the heroes that will be getting the Fab Five's expert help in Season 4 of Queer Eye, including a woman who has apparently had the same hairspray-coated hairstyle since the '90s, a man in a wheelchair who says he is ready to grow into his new life, and a man who states that he has never had a conversation with a gay person before. But the biggest standout is Kathi Dooley, who just so happens to be Jonathan Van Ness' high school orchestra teacher. While the bulk of the new season is set in Kansas City, Missouri like last season, the Fab Five does take a trip across the state line to visit Jonathan's high school in Quincy, Illinois. There, he reconnects with his orchestra teacher, and tearfully admits to Kathi that she helped to save his life.

Watch the full, emotional Queer Eye Season 4 trailer — which includes a bunch of fun homages to the '80s classic The Breakfast Club — for yourself below:

And the Queer Eye team is currently hard at work making even more future seasons of the hit Netflix series while fans wait for Season 4 to premiere on Friday, July 19. Last month, Netflix picked the series up for a fifth season, which the Fab Five is currently filming in Philadelphia, Pennsylvania. The location jump marks the first time that Queer Eye will have left the southern midwest for a coastal city, and it will also be something of a homecoming for Karamo Brown, who got his start on reality television on the Philadelphia season of The Real World back in 2004.

On top of that, Queer Eye is also set to release a new four-part special at some point in 2019, which follows the Fab Five as they take their talents to Japan. Queer Eye: We're in Japan! will consist of four episodes, and follow up last year's one-off special "Yass, Australia!" as the show's second international outing. Netflix has yet to announce when this Japan-set special will be premiering on the streaming service, but it is confirmed to drop before the end of 2019, so Queer Eye fans have something else to look forward to this year after bingeing all of Season 4 later this month.

Fans only have to wait a few more days for the eight new episodes of Queer Eye Season 4. The new season will hit Netflix on Friday, July 19.