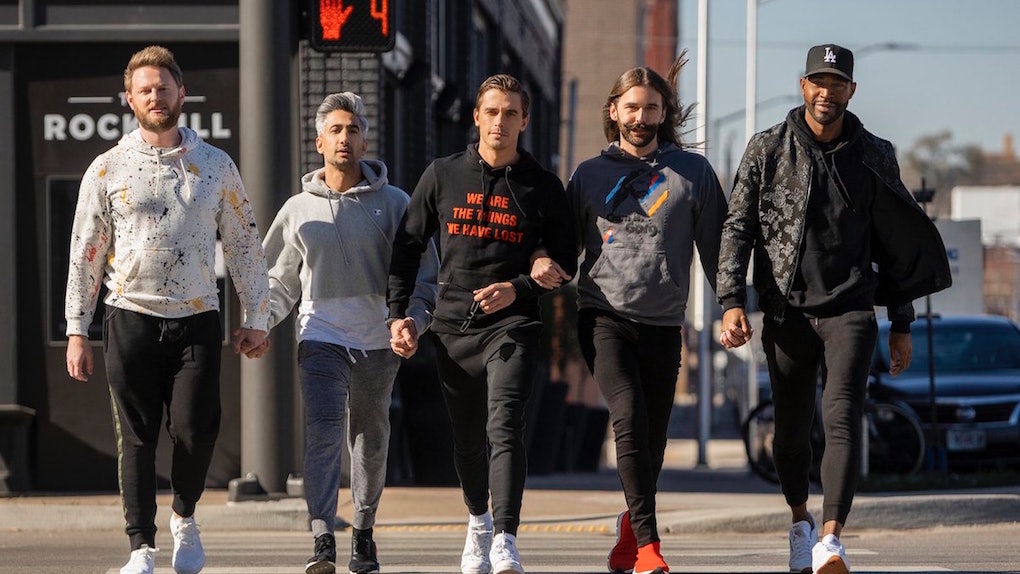 Queer Eye's Fab Five is taking on a whole new meaning now, because the hit Netflix makeover series just got renewed through Season 5. The streaming service announced that the feel-good juggernaut will be returning for not just one, but two more seasons... and the next new season is going to premiere in just one month! And that is not the only surprise these two new seasons have in store. Now that we know Queer Eye Seasons 4 and 5 are happening, here is what fans can expect from the two new seasons.

Fans only have to wait one month for the new season of Queer Eye to hit Netflix, because the network revealed that it will be premiering Season 4 on Friday, July 19. The new season will be set in Kansas City, Missouri, the same place as Season 3. But surprisingly, the also-picked-up fifth season of the show will move the Fab Five to the East Coast for the first time, as it will be set in Philadelphia, Pennsylvania. The location choices seem to be setting up a pattern of Queer Eye filming two seasons per city before traveling to a new town. Philadelphia is also a particularly interesting destination since Fab Five culture expert Karamo Brown first got his start in reality television in that city as a cast member on 2004's The Real World: Philadelphia. The Fab Five are set to begin filming their Philly-set fifth season next month, and it will air on Netflix sometime in 2020.

The Queer Eye cast announced the two new seasons in a short video that revealed the Season 4 premiere date next month and hinted at Season 5 being set in Philadelphia with a short cameo from the Philadelphia Flyers' viral mascot Gritty.

Although Netflix has not yet revealed how many episodes each new season will contain, it is most likely that both Seasons 4 and 5 will consist of eight episodes, the same episode count as the first three seasons.

And these two new seasons are not the only things that Queer Eye fans have to look forward to in the near future. Sometime after Season 4 premieres, Netflix will also drop a new Queer Eye special in which the Fab Five travel to Japan to help out some people there. Queer Eye: We're in Japan! will consist of four episodes, and it will be premiering later this year.

It is hard to believe that Jonathan Van Ness, Tan France, Karamo Brown, Bobby Berk, and Antoni Porowski have only been household names for a year at this point. The Queer Eye for the Straight Guy reboot's new Fab Five quickly shot to fame shortly after the first season of the show aired in early 2018. Since then, the guys have starred in two subsequent seasons of the hit show. Most recently, they proved their pop culture cachet by appearing in Taylor Swift's latest music video, "You Need to Calm Down."

The fourth season of Queer Eye will premiere on Netflix on Friday, July 19.

More like this
Netflix Renewed 'Bridgerton' For Seasons 3 & 4, Likely With More To Come
By Ani Bundel
'The Circle' Season 2 Cast's Instagrams Show Off Their IRL Social Media Skills
By Abby Monteil
Where Is 'The Circle' Season 2 Filmed? The U.S. Version Is Catfishing Fans
By Umber Bhatti
Stay up to date