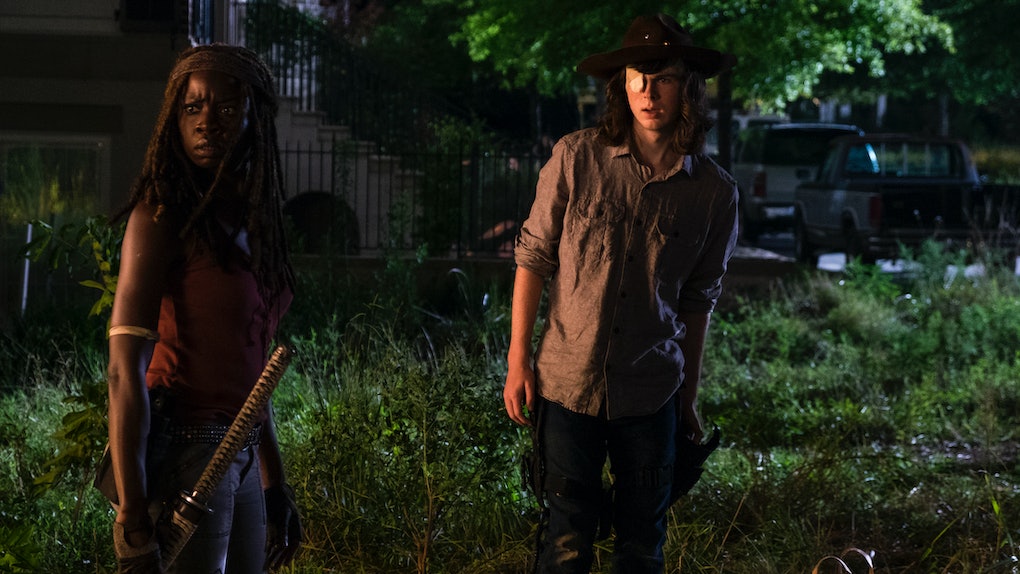 When it's December, you know that means one of two things: the holiday season is officially in full swing, and many of our favorite cable TV shows are about to go on a hiatus. And unfortunately, for The Walking Dead fans, that portion of a TV show dry-spell includes this show. But fortunately the mid-season finale of the show did not disappoint, and it's leaving us fans with a lot to talk about until the show is expected to make a return at some point in February 2018. And in the meantime, the promo trailer for the The Walking Dead's Season 8 midseason premiere has us so psyched.

After the midseason finale, we were so, so ready for the next episode — but we'll have to wait. At this point, anyone is on the chopping block, and we don't exactly know who will be leading the Kingdom or Hilltop (Alexandria is, uh, a bit depleted) against the Saviors. And the trailer for the upcoming Season 8 Episode 9 doesn't answer many of our burning questions either. All we really know is that characters will soon be dropping like flies and none of us are emotionally equipped to handle it all.

The new trailer basically tells us that nobody is safe at this point. Rick and Negan are for sure expected to go head-to-head at some point during the second-half of Season 8. Negan even asks Rick who's going to be axed next in the "All Out War" to which Rick responds to with a melodramatic "You are."

In the last installment of The Walking Dead, we saw a ton of major plot twists, which included Rick aligning with the Scavengers and forming a seriously unlikely alliance with the gang.

And since the previous episode left Rick and his fate off in questionable territory, fans knew that the mid-season finale was sure to be a doozy. It was also bumped from the usual 60 minutes to 90 minutes, so that's a half hour of more action that the show runners blessed fans with this week.

During the midseason finale, fans had a ton to freak out about. When we last left off the show, Rick made a deal with the Scavengers what left a lot of fans confused. Most of the episode was also surrounded around Eugene, and whether or not he was going to either get killed or kill himself.

And then there was Carl. So what happened to Carl that has him on the verge of death? He basically tried to sacrifice himself to Negan once he was found by the Alexandria sanctuary. We didn't know why he so easily offered himself as tribute until the very end of the episode. After Rick and Michonne found him, we learned that he already suffered from a walker bite while he was trying to save a stranger from a zombie the week earlier. So he knows that he's as good as dead anyway.

This potential death might even hit closer to home more than any other death in the series, considering that fans have basically watched the actor that plays Carl, Chandler Riggs, grow up before their very eyes. So fans are going either one of two ways right now: they're either preparing themselves for the worst or are secretly wishing that Carl is the first survivor that is immune in the apocalypse. Or both.

So it's not hard to figure out what can potentially happen to Carl following the cliffhanger moment in the mid-season finale. And if we know anything about this show, it's that the writers and show runners definitely always have a shocking moment or two up there sleeves. But for now, all us fans can do is wait patiently for the next episode of Season 8, which isn't set to air until February.