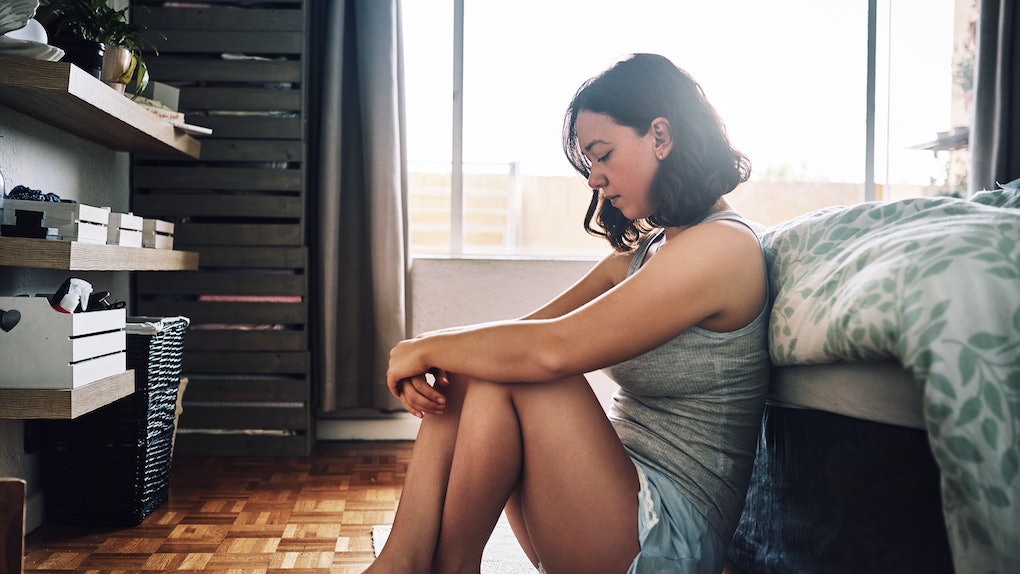 Everyone handles breakups differently. For some people, the end of a relationship might feel like the end of the world. For others, splitting up from an ex can feel like a new beginning. Of course, the way you feel when newly single depends on the circumstances of the split, but your zodiac sign can also really influence the way you decide to mend your broken heart. Based on your zodiac sign, the emotion you feel after a breakup can range from sad to mad to glad, and while all post-breakup feelings are valid, they aren't necessarily the most fun.

Depending on your sign and your personality, the best way to get over someone old may be to post some hot new single-girl selfies on the 'gram. Or maybe you just want to put on some cozy sweatpants, cuddle with your cat, and watch a rom-com. Your method of dealing will likely respond to the way you're feeling. I can't promise that you're going to feel better right away. I can't even tell you how long it might take before you start to feel better. But here's how you're probably going to feel initially, based on your zodiac sign.

You can never predict what an Aquarius is going to do, because being unpredictable is kind of their thing. After splitting from someone, they'll want to upset everyone's expectations by proving that they're totally fine — and probably making some spontaneous decisions along the way. Rather than watching a sad movie, an Aquarius' idea of healing is flying to Spain for a month and telling no one.

Pisceans are romantics who fall fast and hard, and it's not uncommon for a Pisces to imagine walking down the aisle with every new person they date. Breakups shatter a Pisces' idealized vision of the future, and while they may doubt the prospect of getting fairytale ending for a bit, a Pisces is too much of an idealist to be kept down for long.

Aries are high achievers, and for them, a breakup doesn't feel like a personal failure — they see it more as an offense. Some people may say that the best revenge is living well, but an Aries believes that the best revenge is looking good (and trash-talking their ex any chance they get). An Aries can do no wrong, so if a relationship ends, it's definitely the ex's problem, not theirs.

For a Taurus, a breakup doesn't call for self-improvement — it calls for self-care. A newly-single Taurus can likely be found swaddled in a weighted blanket, eating ice cream, wearing a face mask, and watching a Hallmark movie marathon because, honestly, they totally deserve it. For them, the only cure for heartache is a pedicure, a massage, and maybe a seaweed wrap if they really feeling like treating themselves.

Geminis never feel just one emotion at once. As a sign of duality, Geminis have the incredible ability to feel offended and over it at the same time. On the same night they decided to go out and make out with as many strangers as they can, they might end up crying in the bathroom and missing their ex instead. A Gemini is never quite sure how they feel, so they just end up feeling everything at one.

Cancers are sensitive people, and when a relationship ends, they'll spend less time thinking about what comes next and more time revisiting the past. This sign has a tough time letting go of anything, so after a breakup, a Cancer will likely spend their time rereading old texts and scrolling through their ex's Instagram page, trying to figure out when exactly things went wrong.

If you break up with a Leo, they're going to make you pay for it. As well as posting daily selfies proclaiming their newly single status, a Leo will likely convince all the friends they shared with that ex to take their side. You might think a Leo would block their ex on social media, but they'll probably keep following them just so they can comment, "Ew," on all of their ex's posts.

Virgos may be practical, grounded people, but they take relationships very seriously, and the end of one can be pretty disorienting. They thrive on schedules, and when a relationship ends, so do their weekly Friday dinner dates, Tuesday movie nights, and Saturday laundry days (because yes, a Virgo probably did their ex's laundry for them and actually enjoyed it). Virgos might even miss the routine they had with their ex more than the ex themselves.

Libras care deeply about their reputation. When they break up with someone, they're likely less worried about themselves and more concerned about others finding out. Rather than proudly proclaiming their newly single status to anyone who will listen, a Libra tends to lay low after a breakup, figuring out the best way to break the news to people without anyone judging or — worse — pitying them.

When you wrong a Scorpio, there's no making things right. Those born under this sign love harboring resentment, and after a breakup, they don't want to forgive and forget — they want revenge. Some people are satisfied giving their ex dirty looks when they run into each other at parties. Scorpios are only satisfied after they spread an embarrassing rumor about their ex to everyone they know.

Sagittarians know how to roll with the punches, and for them, breakups aren't that big of a deal. TBH, being single isn't all that different from being in a relationship to them, as they tend to do whatever (and whomever) they want whether they're dating someone or not. A Sagittarius is the kind of person who stays friends with their exes, because life is too short to be bitter, you know?

Capricorns aren't really relationship people. They're committed to their studies and their careers, and their social life tends to takes a back seat to their professional goals anyway. When your schedule is packed with meetings and workouts, it's hard to make time for dates, so the end of a relationship really just means the end of pointless obligations. Break up with a Capricorn, and they'll probably thank you.

More like this
How To End A Fight With Each Zodiac Sign, Because Conflict Is Exhausting
By Roya Backlund
3 Zodiac Signs Most Compatible With Kourtney Kardashian & Travis Barker
By Caroline Colvin
Jennifer Lopez & Alex Rodriguez Confirmed Their Breakup In A Statement To 'TODAY'
By Veronica Lopez
Stay up to date