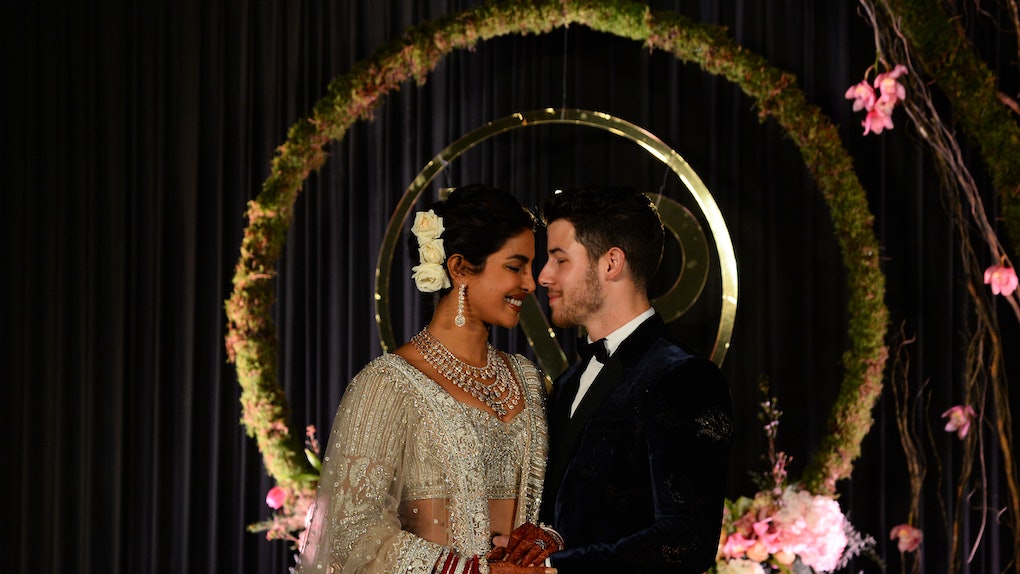 The Jonas Brother Wedding You're Most Likely To Copy, Based On Your Zodiac Sign

Though it's not even close to the year 3000, as of May 1, 2019, all three Jonas Brothers switched their purity rings to wedding rings — and of course, one sour cherry Ring Pop. Throughout their careers, the brothers have developed their own individual styles. And the contrasting nature of each Jonas Brother wedding is perhaps the ultimate highlighter on the differences between the brothers and their now-wifeys.

From a seemingly impromptu Vegas party with a literal Elvis impersonator and aforementioned Ring Pop wedding bands, to a pair of lavish cross-cultural ceremonies — each Jo Bro wedding really took on a life of its own. And in keeping with current trends, unpacking the astrology behind each Jonas nuptial is a topical and colorful conversation. Though astrology can't guarantee everything, it can be fun to see how it plays into our tastes and preferences. And if you've ever wondered which Jonas Brother's wedding yours is likely to resemble, based on your sign — you, my friend, have come to the right place.

The movers and shakers of the world, cardinal signs are the leaders of the zodiac — aka Aries, Cancer, Libra, and Capricorn. Not likely to take "No" for an answer, these signs visualize their dreams and then stop at nothing to make them happen. When it comes to the Jonas Brothers' weddings, it's clear that cardinal signs would be most drawn to Nick Jonas and Priyanka Chopra Jonas' incredible double wedding situation. First came the American ceremony full of Ralph Lauren, western philosophy, and southern food. Next came the traditional Indian wedding, with a Hindu ceremony, a star-studded guest list of 400, and more gorgeous jewelry than you could ever imagine. Both weddings began with the traditional Indian Mehendi (a ceremony for Bridal henna) and Sangeet (a pre-wedding musical component). And from the pictures, it's clear that some major planning, big ideas, and lots of work went into the perfect execution of Jonas and Chopra Jonas' big day(s) — something that comes quite naturally to a cardinal sign.

I just need to say it once more, Ring Pop wedding ring. Never one for tradition, the mutable signs of the zodiac, aka Gemini, Virgo, Sagittarius and Pisces, go with the flow and live for adventure. Versatile and adaptive, these signs are great at being creative and expressive — much like Joe Jonas and Sophie Turner's Vegas wedding, that came as a surprise to, like, everyone (expect Diplo, apparently). Officiated by a literal Elvis impersonator in a ceremony that reportedly lasted about 15 minutes, Joe and Sophie tied the knot with 40 of their closest friends and family. Turner rocked a jumpsuit with her veil, AND all three brothers donned gray suits. Though Turner does have a pretty insane diamond engagement ring, the pair said "I do" with a novelty candy. In a totally unique and super camp ceremony that any mutable sign would be all over, whatever happened at Turner and Jonas' Vegas celebration has certainly not stayed in Vegas.

Stable and true, fixed signs are the grounded and loyal angels of the zodiac, aka Taurus, Leo, Scorpio and Aquarius. With a penchant for authenticity and a likeliness to follow logic over feelings, these signs are most likely drawn to a more traditional wedding, like that of Kevin Jonas and Danielle Deleasa. The firstborn Jonas Brother braved a New York winter to marry his boo in a — you guessed it — winter-themed ceremony at the French-inspired Oheka Castle. Both hailing from the east coast, Jonas and Deleasa honored their roots by choosing a New York wedding full of winter whimsy. Rocking a Vera Wang gown, Deleasa met her now-hubby at the alter, escorted by her father. The winter theme transcended in beautiful lights and white floral arrangements, with heartwarming toasts given by the two other brothers. With a classic beauty and traditional charm, Jonas and Deleasa's wedding still stands the test of time, something fixed signs know all too well.

Of course, no matter your sign, if you're totally into Elvis or winter wonderland decor, your wedding day can be whatever you want it to be. Whether you have one ceremony, two ceremonies, or more ceremonies than there are Jonas brothers (don't forget Frankie!!!), tying the knot is your time to shine — however low-key or (Ring) poppy you want it to be.