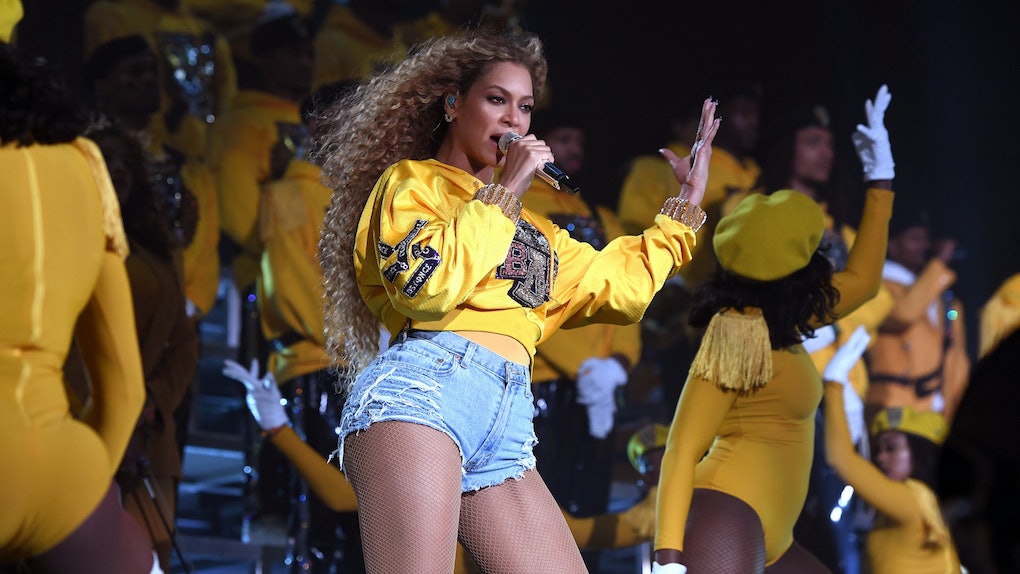 The 'Homecoming: A Film By Beyonce' Trailer Is Going To Give The Bey Hive Actual Hives

Beyonce famously keeps her private life private... but she is offering fans a peek behind the curtain in a surprise-announced Netflix documentary that is premiering in just a matter of days. That's right — a Beyonce documentary is going to be streaming on Netflix in less than two weeks! Although there have been murmurings about this documentary potentially happening, Netflix confirmed all the rumors by releasing the full Homecoming: A Film By Beyonce trailer, which features clips from her iconic 2018 Coachella performance as well as never-before-seen behind-the-scenes moments of the singer's private life.

Reports began sprouting up last week that Beyonce was working with Netflix on a documentary that would focus on her 2018 Coachella performance. Those rumors only gained traction over the weekend, when Netflix's Twitter account posted that an ambiguous project called Homecoming would premiere on April 17. Since the announcement was colored yellow and black and written in Greek letters (both iconic aspects of the Beychella performance), Beyonce fans instantaneously knew that this must be the singer's surprise documentary. And in case anyone had any doubts, Netflix confirmed Homecoming is the Beyonce documentary with its newly released trailer.

The new trailer begins with brief clips of Beyonce rehearsing in the days leading up to her 2018 Coachella performance, as Maya Angelou's voice is heard speaking about her goal to be a representative for her race and advising younger generations to value the truth. Fans see new clips of Beyonce smiling with her husband Jay Z, leading a hundred dancers in rehearsals for her ambitious performance, and even her daughter Blue Ivy whipping her hair alongside her mom during a rehearsal. Check out the full trailer below:

Homecoming: A Film By Beyonce will debut on April 17, just a couple of days after the anniversary of her historic Beychella performance. On April 14, 2018, Beyonce took to the Coachella stage as the first black woman to headline the music festival, performing a 2-hour set backed by 100 dancers featuring nearly 30 songs that spanned her entire musical career. Beyonce was also joined by her husband and frequent collaborator Jay Z, her sister Solange, and the members of her former girl group Destiny's Child, Kelly Rowland and Michelle Williams, for various numbers throughout the show.

Immediately, Beyonce's Coachella set received widespread praise from both fans and critics. The entire performance was also broadcast via live-stream so even fans who were not at Coachella could watch it, and it remains the most watched live streamed performance of all time. Throughout the set, Beyonce paid tribute to historically black colleges and universities through the use of Greek symbols and stepping choreography. It was also praised for its various tributes to the African American experience throughout history, as Beyonce sampled Malcolm X and Nina Simone, and included a rendition of "Lift Every Voice and Sing" (colloquially referred to as the black national anthem) in her set.

The new trailer appears to indicate that fans will be able to relive the full Beychella experience while also seeing all the work that Beyonce and her team put into it beforehand. Homecoming: A Film By Beyonce will debut on Netflix on April 17.

More like this
Is Netflix Making A 'To All The Boys' Spinoff Series About Kitty? Here's The Tea
By Rachel Varina
10 Rainy Day Movies To Watch On Netflix That Are Perfect To Pass The Time
By Kristen Perrone and Lexi Williams
Netflix’s 'Shadow & Bone': Release Date, Cast, Trailer, & More Info
By Ani Bundel
Stay up to date