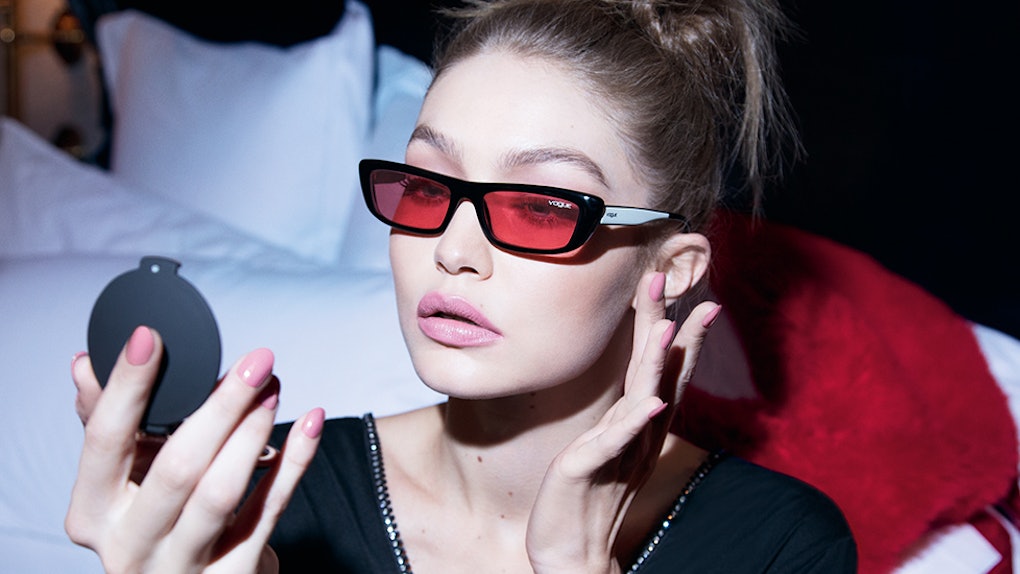 Prior to last year, I bought all my sunglasses for $5 apiece from vendors on the site of the street in New York City. It was cheap and convenient for stocking up on lots of styles, but they were obviously low quality, and I broke almost as many as I bought. This year, I've made a point to slowly start investing in my glasses, which is why I'm so interested in the Gigi Hadid x Vogue Eyewear Collection's second drop, because after the major success of their first collaborative line, I know it's going to be bomb. Gigi only wears the most chic shades, so if a pair of sunglasses has her stamp of approval, I have no probably paying more than five bucks for them. I'll miss my casual banter with the streetside vendors, sure, but my accessories game will be on point, so it's a game of wins and losses.

When the supermodel and the glasses brand first joined forces back in 2017, everyone was shocked at Hadid's design chops. Every single style was both modern and trendy yet totally retro, so naturally, they all flew off the shelves. Fast-forward to now, the dream duo are back in action with even more chic styles to obsess over. Like I said, I trust my street vendor, but when it comes to fashion, I trust Gigi Hadid more.

Girl is always living it up in a cute pair of shades, you know?

And she's serving major looks in the new campaign:

Holy cool. In the above shot, Gigi pairs 2012-Taylor Swift bangs and an any-year-Taylor-Swift red lip with the VO5282SB in Brown Grey Tortoise ($140, vogue-eyewear.com), called Super. I've been on the hunt for the perfect pointy, tortoise glasses for a good street style look, and these are basically made for the 'Gram, if you ask me. In fact, I'd even say they look "super." Get it?

Get this — Hadid even named one of the newest styles after her sister. So cute!

Meet The Bella, aka the VO5283S ($140, vogue-eyewear.com), available in six cool-girl-approved colorways with a trendy low-lens shape, from black with a rose tint to opal frames with gray gradient lenses.

Bella does love a statement sunny, so her sister really nailed it with her namesake pair:

BTW, if you want to see what all the pairs in the new collection look like on, the Vogue Eyewear Instagram has tons of pics of Hadid rocking the different styles:

Perhaps the most wearable sunnies in the new drop are these futuristic frames:

Can I pull these off? I'm honestly not sure, but if Hadid wants me to try, then I've got no other option. The VO4137S ($140, vogue-eyewear.com) shape is referred to as G-Vision, and comes in five colorways, my favorite of which is a rose gold with blue gradient lenses.

Interested in shopping the entire line? Apologies in advance to streetside sunglasses peddlers everywhere, but the Special Collection By Gigi Hadid is available now on the Vogue Eyewear site.