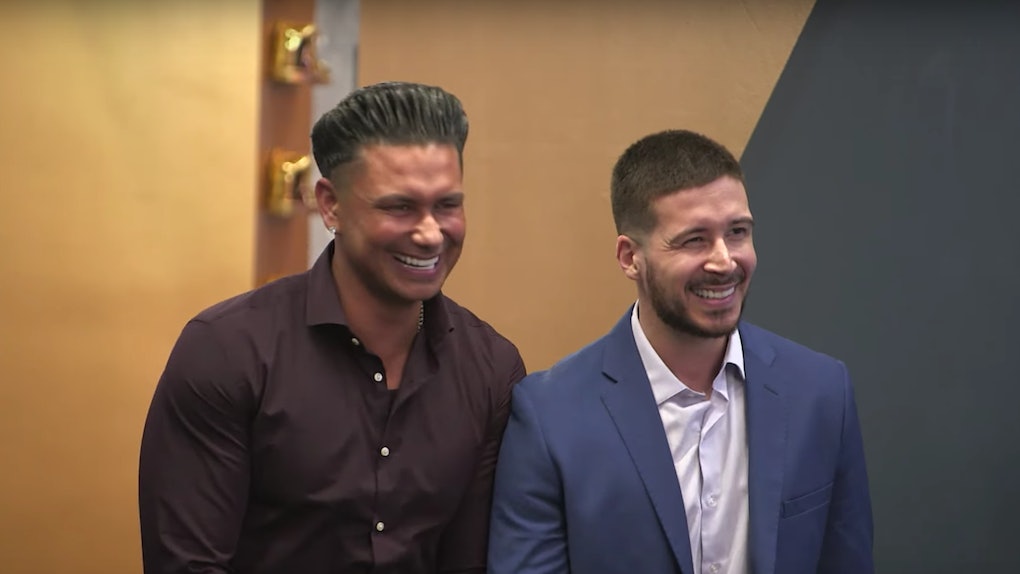 What happens when you mix all the hard-partying outrageousness of Jersey Shore with the intense melodrama of The Bachelor? Well, we are about to find out. After a decade of on-screen hook-ups and break-ups, Jersey Shore stars DJ Pauly D and Vinny are ready to get serious about finding love on their new dating competition series. And the full trailer for MTV's Double Shot at Love with DJ Pauly D and Vinny shows things are going to get much wilder than anything on The Bachelor.

The new show pairs Jersey Shore's best bros with one another to be each other's wingmen in a house full of 20 women competing for their love. Fans have already gotten to see Pauly D and Vinny go through plenty of relationship ups and downs on Jersey Shore and the rebooted Jersey Shore Family Vacation (which will return for Season 3 this year), but the only true love that the two have managed to find so far is with each other — they even had their own matrimonial "brommitment" ceremony.

Throughout the recent seasons of Jersey Shore Family Vacation, Pauly D has consistently lived the bachelor life while all of his castmates dealt with relationship drama. And after Vinny broke up with his ex in the first season of the reboot, he returned to partying it up with his bro Pauly D for the most part... despite some weird tension with Angelina.

The two best buddies may have been focused on partying on Jersey Shore Family Vacation, but their new show is all about finding the one... or actually, the two. But of course, things still go off-the-walls. Check out the newly released full trailer for Double Shot at Love with DJ Pauly D and Vinny to get a taste:

As the trailer shows, Pauly D and Vinny are not the only ones who will be giving us some major drama on the new series. Both men will meet and charm 20 women to try to find their perfect matches, in a similar style to The Bachelor but with a twist. While Pauly D and Vinny get to decide who stays and who goes home, it is up to the women to decide whose love they are competing for. That will definitely affect how the contestants interact with one another, since one group will only be there for Vinny and the other only for Pauly D. It will also be interesting to see if both groups have the same number of women or not... or if a contestant decides to change groups in the middle of the competition!

Along with the full trailer, MTV also posted a hilarious, pun-filled promo for Double Shot at Love with DJ Pauly D and Vinny that riffs on the Bachelor vibes of the show even more. In it, Pauly D and Vinny strike poses in sleeveless tuxedos as they offer up roses to the loves of their life:

Double Shot at Love with DJ Pauly D and Vinny will fittingly premiere with back-to-back episodes on Thursday, April 11 at 8 p.m. ET.