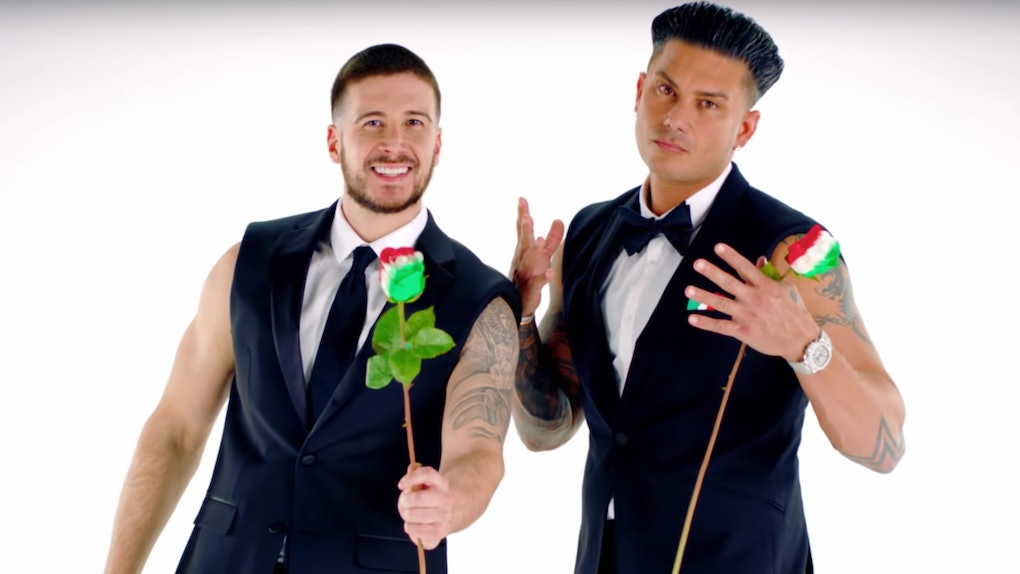 The Promo For Pauly D. & Vinny's 'Double Shot At Love' Is Everything You've Ever Needed

This season of The Bachelor just ended, and Bachelor Nation suddenly has a big void where the journey for Colton Underwood's heart once was. But all the romantics in search of a TV love fix don't need to wait very long to find a new one, because MTV is here to provide. The promo for Pauly D. and Vinny's Double Shot at Love will scratch the Bachelor-meets-Jersey Shore itch you didn't even know you had.

The 30-second promo is jam-packed with enough Jersey Shore references to make even the most reluctant fan ready to GTL with the famous buddies. The video shows the two reality stars, Pauly "DJ Pauly D" Delvecchio and Vinny Guadagnino getting ready to present roses to their prospective partners, just like all the Bachelors have done before them. Only in this case, these roses feature a special Jersey twist: The flower petals are colored red, green, and white in honor of the stars' Italian heritage.

The Jersey jokes continue. Instead of full tuxedos, Delvecchio and Guadagnino are sporting jackets with the sleeves torn off. It's a look that seems much more on-brand for them. And plus, how else could they show off the spoils of all that gym time they have? Jersey Shore's infamous duck phone makes an appearance when Delvecchio answers it and asks, "Hello? Love of my life?"

Perhaps the kicker is at the end of the promo when Delvecchio and Guadagnino offer their roses to the camera. Instead of saying the typical Bachelor line, Guadagnino changes it to: "Will you accept these bros?" Hey, at least it still rhymes with the original line. You can check out the full promo below:

On A Double Shot At Love, 20 women will compete to win Delvecchio and Guadagnino's hearts. Each episode will feature a few competitive events and, of course, a super-dramatic elimination ceremony at the end. But, while women on The Bachelor are all fighting for the love of one man, A Double Shot At Love will also challenge Delvecchio and Guadagnino. The series will also require the men to compete for the female contestants' love.

Delvecchio already has a little experience with finding love while on TV. He previously met his ex-girlfriend Aubrey O'Day on the E! show Famously Single. That series documented all the ups and downs of their relationships, so any interested women on A Double Shot At Love can just look back to that footage to see what they're in for with Delvecchio. He and O'Day broke up in 2017, but he came out of the relationship with a much better understanding of how to be in one. He told E! News:

Hopefully Delvecchio can take some of what he learned and use it to his benefit on A Double Shot At Love. The names and photos of the contestants for the upcoming season have already been released, so fans can start building their brackets now. MTV promises this will be a "reality-dating show unlike any other."

More like this
'Drag Race Down Under' Season 1: Who Went Home This Week?
By Dylan Kickham
'Emily In Paris' Season 2: Premiere Date, Trailer, Cast, Filming News, & More
By Dylan Kickham and Ani Bundel
Bekah Martinez's Explanation For Being Reported Missing In 2018 Is Wild
By Rachel Varina
Stay up to date