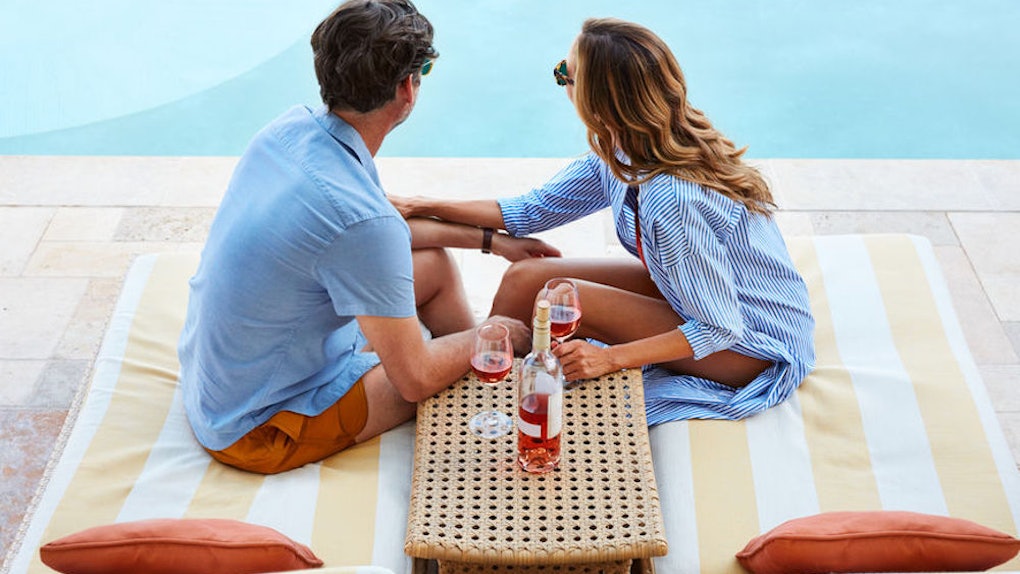 The First Time Traveling With Your SO Is A Milestone, These 7 Women Reveal What Went Down

Traveling is always better with a buddy. Together, you wheel your suitcases through the airport and help each other with any last-minute nerves that come around at the gate. You have someone to share your excitement with — a person who understands your love for planes, or lack thereof. Let's be honest: Some of those long flights you need a friend for making conversation and watching lots of movies. But, the first time traveling with your significant other can be an entirely different ball game. These real women revealed what they were really thinking, and what they learned from the experience.

Whether it's been a year or six months with your significant other, traveling together for the first time is a huge milestone. This is your chance to learn a lot about this person, from how they act in a new environment, to how they react in stressful situations. You may notice that they have some nerves about trying new foods, or maybe their attitude is very "all-in." As much as you may plan and organize your activities, you just have to take a deep breath and make some memories with the person you love.

This is a new experience, and it can also be a beautiful one. Even if nothing goes according to plan, you'll know what to do differently next time. These seven real women revealed what actually went down the first time they traveled with their significant other. (Spoiler alert: It wasn't so bad, after all.)

1. She Learned She Could Chill Out And Actually Have A Good Time

My first experience traveling with a significant other was when my boyfriend of about six months came to visit me during study abroad. Before the trip, I was very nervous because of our minimal time spent together. More than half [of] our relationship thus far had been with me [being] thousands of miles away!

My biggest takeaway when planning: Chill out! You definitely need to have logistics down — tickets, lodging, and transportation. Once that is set, the next step is to choose activities. It’s best to pick one or two big things you want to do each day and then have a list of extras, for if you have time. If you try to cram your days hour by hour you’ll be miserable! Make sure you do things both of you want to do.

2. She Waited A Year To Travel With Her SO, And It Wasn't Awkward At All

Traveling with my boyfriend for the first time was basically terrifying! We'd known each other for about 12 years, but only had been dating a few months when we booked the trip. My biggest fear was spending a full seven days with him— we had never spent that much time together. Would it be awkward? Would we have enough to talk about?

I really feel like a vacation with your significant other is a test to see if you could ever live with them in the future. All that fear was for nothing, because we had an amazing time! No awkward silences, or anything like that. I'm glad we waited until almost a year to go on vacation together. If we had been dating under six months at the time, I feel like it would had been much more awkward because we weren't as comfortable with each other.

3. She Had Rough Experiences In The Past, But This One Proved To Be So Great

My boyfriend and I took our first vacation together about five months into our relationship. I was so excited for our trip to Miami, because I think traveling together is such an awesome way to really get to know a person — you see how they adapt to new or stressful situations, how they like to have fun, how they treat money, and so much more. But like five percent of me was worried, because I've had rough travel experiences with past partners.

The one hurdle was actually getting to Miami. Flying makes me very anxious. I'm the kind of person who likes to get to the airport super early. We wound up leaving so early that he was pretty exhausted the first day, and I was worried that the trip would start off on the wrong foot. But after that first day, we had so much fun! We had such a blast that the trip made me feel even more hopeful about what was already a really happy, satisfying, positive relationship.

4. She Took A Long Road Trip With Her SO, And It Was A Win

It was about six months into our relationship and we decided to take the 12-hour drive to my family's beach house in North Carolina for a mini-vacation. All I was thinking was, "This is a long drive, what if I learn stuff about him that I hate, or he learns stuff about me that he hates. What if we end up hating each other by the end of the trip? Wait what if I have to go to the bathroom?!" Well, we survived argument-free and had a blast. Didn't even get sick of each other! Pretty sure he's the one.

5. She Was Nervous They Would Get Sick Of Each Other, But It Went Well

The first time I traveled with my boyfriend was the longest consecutive time we’d spent together. We went on a week-long trip and had been dating less than a year. So, I definitely was wondering if we’d get sick of hanging out 24/7. We live together now, and haven’t gotten sick of being around each other. So far, so good!

6. She Found A Trip Was A Great Way To Have Some Alone Time

I wasn’t nervous at all to travel with my boyfriend. I was more excited than anything. We both work a lot, so our first trip together was well into our relationship, when we really knew each other. Because we waited over a year to go away, we were both already beyond comfortable with each other and it took all of the awkwardness away. Spending time alone was really nice especially since it’s sometimes hard to do that in your early 20s when you’re fresh out of college, trying to find a way to move out of your parents' homes. Traveling just confirmed all the good things I already knew about my relationship.

7. She Took A Trip To Another Country And Made Tons Of Memories

Going on holiday for the first time with my boyfriend was scary at first for me, as I was only 19 and had only ever gone on holiday with my family before. I was still a bit anxious as I went to bed that night, crossing my fingers that it would all go smoothly. Long story short, it was an experience that really strengthened our relationship and we often snuggle up and remember the fun we had in Phuket, Thailand — eating Pad Thai every day, the cat cafes, and drinking Thai beer by the beach.