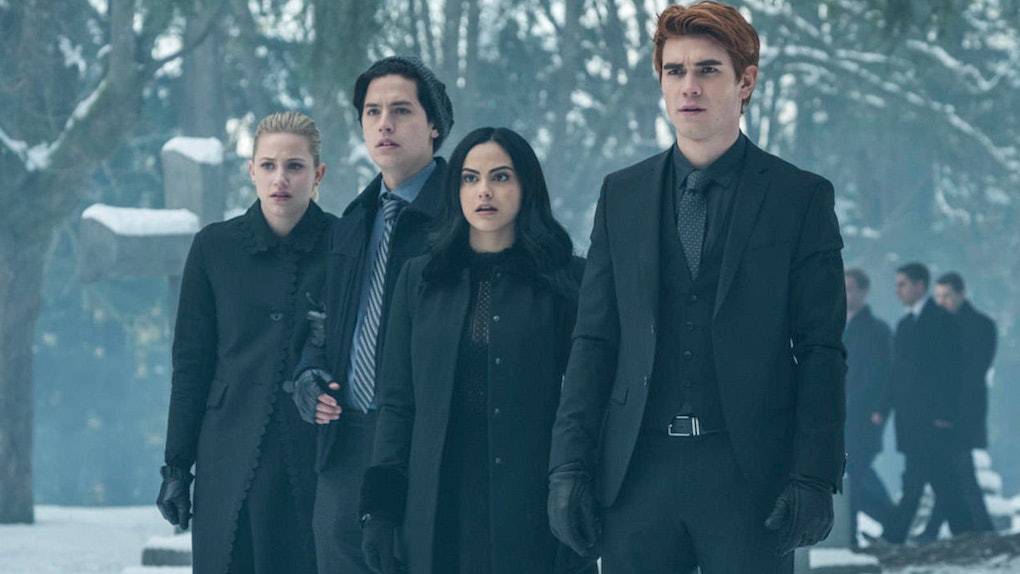 It has been two months since Riverdale hit fans with that bombshell Season 3 finale, and now the cast and crew are beginning work on the upcoming fourth season. Production on the new season began earlier this week, and the cast shared a sweet image of their first Season 4 table read along with a tribute to their recently deceased co-star Luke Perry. The first images from Riverdale Season 4 show that the season premiere will be a majorly emotional episode.

Back in March, Luke Perry suddenly died following a massive stroke. Perry played Archie's dad Fred Andrews on Riverdale, and the show was still shooting its final few episodes of Season 3 at the time of his death. Because Riverdale only had a limited number of episodes left to get through last season's very complex plotlines, the show opted to hold off on explaining Fred's absence until the next season, instead just briefly mentioning that Fred left town for while. But now that the writers have had time to properly craft a story, showrunner Roberto Aguirre-Sacasa revealed that the Season 4 premiere will be a tribute to Luke Perry and will focus largely on saying goodbye to Fred Andrews. Aguirre-Sacasa announced on Twitter that the premiere episode is called "In Memoriam," and wrote that it is "probably the most important episode of Riverdale we’ll do this year, if not ever."

The Riverdale cast recently read through that tribute episode as they began Season 4 production. Mädchen Amick (who plays Alice Cooper on the show) shared a snapshot of the cast during the table read, and wrote: "There was nothing but love, memories and mourning for our beloved Luke as we honor him in our first episode back."

Roberto Aguirre-Sacasa also shared the first still from the Season 4 premiere of Riverdale. The shot features a shirtless Archie wearing a tool belt while standing in front of Pop's. I mean... this is still Riverdale after all.

Along with providing some closure for Fred Andrews and honoring Luke Perry, the new season also has a ton of storylines to continue after the cliffhanger-filled Season 3 finale. Spoiler alert: The rest of this post contains spoilers from the Riverdale Season 3 finale. While Archie did not really get much of a twist ending in Season 3, all of the other main characters did. Veronica was shocked to watch her mother being arrested, while her father implied a revenge plan on his daughter from behind bars, and Cheryl took an extremely creepy turn by taking her twin brother's corpse home with her and talking to it.

But the two biggest bombshells both involved Jughead. The first was that Betty and Jughead's half-brother Charles Smith revealed he is alive, and also a CIA agent who had been working with Alice to infiltrate The Farm. And the finale also gave fans Riverdale's first-ever flash forward, which showed Archie, Betty, and Veronica burning their bloody clothes in the middle of the woods halfway through their senior year. The scene heavily implied that Jughead might die in Season 4, so fans are going into this season already super-concerned.

Riverdale Season 4 will premiere Oct. 9 on the CW.