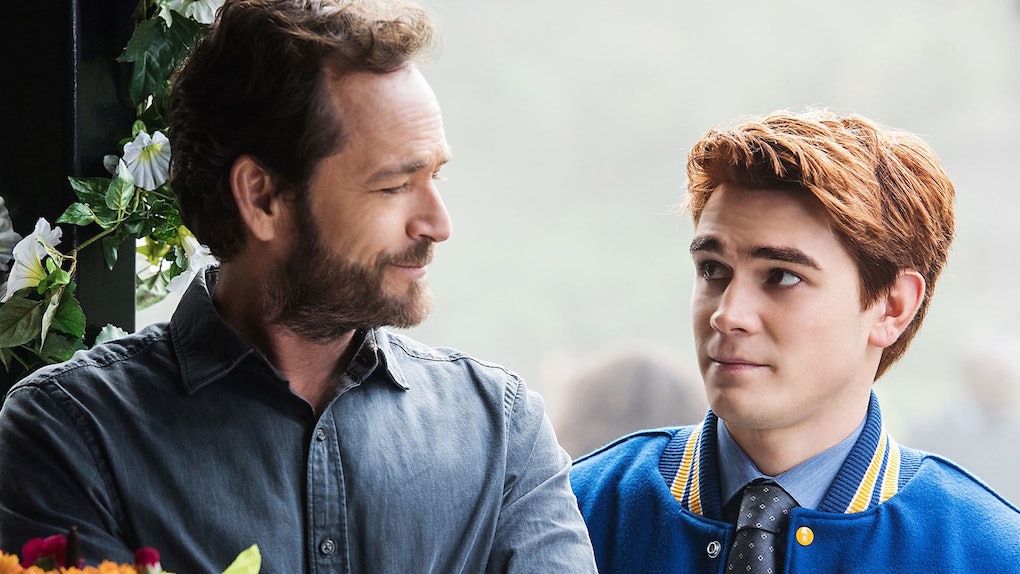 The upcoming fourth season of Riverdale will kick off on a particularly emotional note. Midway through the teen drama's third season airing on the CW earlier this year, the world was shocked to learn that actor Luke Perry had suddenly died of a stroke. Although Riverdale could not really pay proper respects to its star's passing in the midst of its final few episodes of the season, the show will waste no time in paying tribute to Perry in its next new episode. The Riverdale Season 4 premiere will be a tribute to Luke Perry, showrunner Roberto Aguirre-Sacasa revealed recently, and it promises to be the show's most important episode ever.

Luke Perry died on March 4 after suffering a massive stroke days earlier. At the time, Perry was still filming for Season 3 of Riverdale, which was also in the middle of airing. Since the season had already ramped up to its plot-filled final few episodes, there was not really any space in the third season to react to Perry's death within the show. Of course, the cast shared their heartbroken reactions and the show went on a brief hiatus, but the remaining episodes of Season 3 opted to sideline the Fred Andrews character by simply saying he went out of town. But now that Season 3 is over and the writers are crafting a new story for Season 4, the series can finally give Luke Perry the tribute that he deserves and also say goodbye to Archie's father.

Riverdale showrunner Roberto Aguirre-Sacasa revealed on Twitter that the first episode of Season 4 will be entitled "In Memoriam," and that it will be a tribute to Luke Perry. He said the episode may be the most important one that the show ever releases.

The announcement about the Season 4 premiere comes shortly after the CW revealed when the new season of Riverdale will be kicking off. This Luke Perry tribute episode will air on Wednesday, Oct. 9.

It is also safe to assume that, story-wise, the loss of his father will have a major affect on Archie's storyline in Season 4. The Season 3 finale teased where the stories of all the main characters would be headed in the new season, but Archie notably got the least revealing ending. While Betty and Jughead discover they have a half-brother who works for the FBI and Veronica is shocked when her imprisoned father somehow arranges for her mother's arrest, Archie's last moment in Season 3 is just him deciding to turn his boxing gym into a community center for homeless youth.

Fred's disappearance at the end of Season 3 prompted the arrival of Archie's absent mother Mary Andrews (Molly Ringwald), who stepped into Fred's parental role for the last few episodes. It is still not clear whether Ringwald will be bumped up to a main role in Season 4 to become Archie's new guardian, or whether Mary will return to Chicago and remain a recurring role.

Riverdale Season 4 will premiere on Wednesday, Oct. 9 at 8 p.m. ET on the CW.