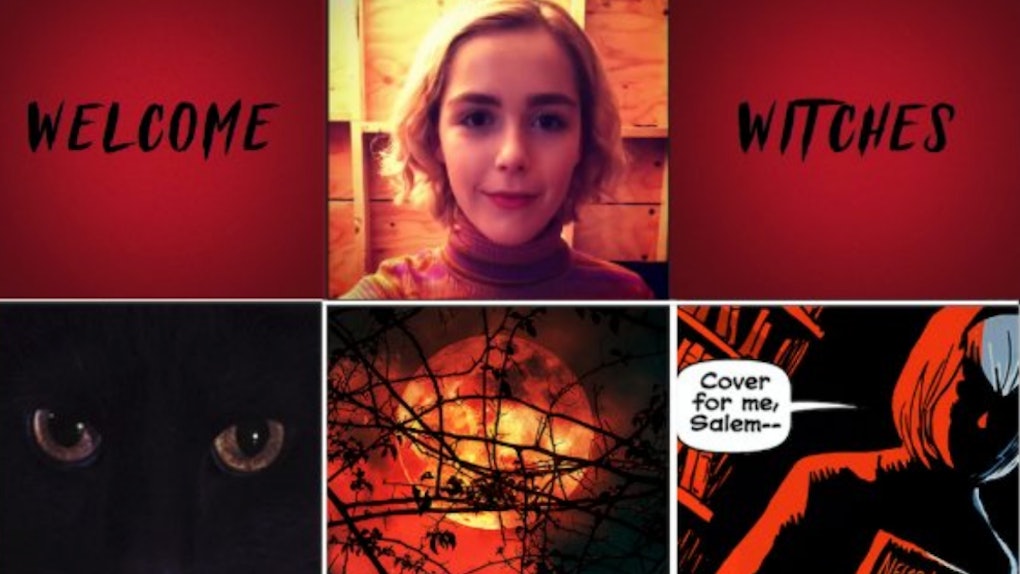 The brand-new Sabrina Spellman series is about to fly onto Netflix, and now we are finally getting our first official looks at the spooky, magic-filled Riverdale spinoff. Over the weekend, showrunner Roberto Aguirre-Sacasa posted the first Chilling Adventures of Sabrina teaser trailer, and the cast came together to welcome fans to the show's newly created Twitter and Instagram accounts. Let's dive right into all the new videos and news about Chilling Adventures of Sabrina.

The new Sabrina series was first announced last fall as a spinoff of the CW's hit teen drama Riverdale, given that the character of Sabrina Spellman also has her roots within the Archie Comics. Although Sabrina is best known to most TV fans for the '90s ABC sitcom Sabrina the Teenage Witch, which starred Melissa Joan Hart as a young witch whose magical powers often made her life at high school challenging, the Chilling Adventures of Sabrina is going to be completely different from that. Producers cited horror classics like The Exorcist and Rosemary's Baby as inspirations for the darker and more twisted portrayal of Sabrina Spellman's story, and the fact that Chilling Adventures of Sabrina will air on Netflix rather than ABC or even the CW gives it more reign to get as spooky as it wants.

Showrunner Roberto Aguirre-Sacasa gaves us a taste of just how supernaturally creepy the Chilling Adventures of Sabrina will be by sharing a moody new teaser trailer for the series. Check it out below:

Although the short teaser does not actually include any footage from the upcoming Netflix series, it does give fans a feel for the dark and creepy tone of the show. The clip shows shows an ominous woods full of candles, the comic-strip version of Sabrina holding a necromancy book, and Salem's cat eyes appearing in the darkness.

The real purpose of the brief teaser was to introduce the new official Chilling Adventures of Sabrina social media accounts. For the show's first post, the Twitter and Instagram accounts shared a video of Sabrina Spellman (Kiernan Shipka) welcoming new followers to the coven alongside other members of the cast.

Other members of the show's main cast also posted videos to announce the new Chilling Adventures of Sabrina social media accounts, which were compiled and shared on Twitter:

Unfortunately for Riverdale fans, it does not sound like we will be seeing any familiar faces from Sabrina's sister series pop up on the show's new social accounts. Riverdale fans had been speculating about Sabrina Spellman possibly being introduced on the CW series before her spinoff premiered, but that wound up not happening, and now the cast and creatives behind the shows are saying that there will not be a crossover between Riverdale and Sabrina. At least... not right now — I'm still holding out hope that Sabrina's magic will seep into Riverdale next year.

The creation of these Chilling Adventures of Sabrina social media pages must also mean that we are very close to finally getting an official premiere date. The series is expected to premiere on Netflix this fall.

More like this
Netflix's 'Shadow And Bone' Virtual Experience Is Full Of Grishaverse Gems
By Ani Bundel
'Emily In Paris' Season 2: Premiere Date, Trailer, Cast, Filming News, & More
By Dylan Kickham and Ani Bundel
These 'Shadow And Bone' Behind-The-Scenes Facts Are So Magical
By Abby Monteil
Stay up to date