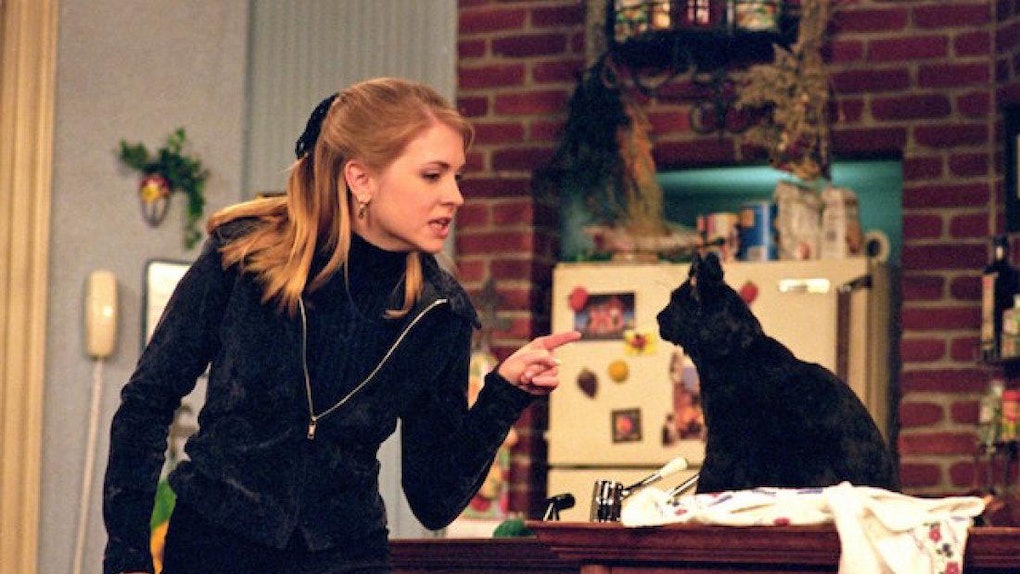 The original teenage witch is finally talking about the dark, new adaptation of Sabrina coming to the CW as a spinoff of its series Riverdale. Melissa Joan Hart, who starred in the title role of the ABC's sitcom Sabrina the Teenage Witch from 1996 to 2003, warned fans that they shouldn't expect to see much similarity at all between the upcoming Sabrina series and the one that she made popular. In fact, Melissa Joan Hart teased that the new Sabrina series will probably have more in common with another supernaturally-gifted badass blonde from the '90s: Buffy the Vampire Slayer.

Melissa Joan Hart and the rest of the Sabrina the Teenage Witch cast reunited at Los Angeles Comic-Con over the weekend to reminisce about their now 20-year-old sitcom, as well as offer up some insight about the upcoming Riverdale spinoff that will bring Sabrina Spellman back to our television screens next year. When the topic of the new series (which will be titled The Chilling Adventures of Sabrina) came up, Hart made it clear that the cast of the '90s sitcom is not involved, and that the new series would be dramatically different from their show.

We’re not involved… The rights reverted back to [Archie Comics], and they’re doing The Chilling Adventures of Sabrina, which is a darker sort of twist. I think our show was about magic and family, and I think the new one — it sounds like, I have no idea — but the new one is going to be more about witchcraft, dark stuff. I think it sounds more Buffy the Vampire Slayer than it does Sabrina, so I think it will appeal to a different kind of audience and be a totally different show.

Buffy the Vampire Slayer ran alongside Sabrina the Teenage Witch for its whole run throughout the late '90s and early '00s, and although the two shows both told the coming-of-age story of a supernaturally powerful heroine, they had drastically different tones. Sabrina was a family sitcom whereas Buffy was a gritty drama that delved more into horror.

Even though The Chilling Adventures of Sabrina will star the same character as Sabrina the Teenage Witch, Hart's comparison of the new show to Buffy does seem to make a lot more sense considering what we know. After all, Riverdale leans much more on the dark, broody, dramatic side than the original comics did, and the CW has announced that the new show will explore the horror genre, citing movies like Rosemary's Baby and The Exorcist as inspirations.

Although the new Sabrina show is something totally different from their sitcom, the topic did get the Sabrina the Teenage Witch cast talking about where their characters might be right now. Hart said that she thinks Sabrina and her high school boyfriend-turned-soulmate Harvey Kinkle may have had a kid and started their own Hogwarts-like witchcraft school to teach their kid and other half-witch, half-mortal children about magic. Hey — I'd watch that if some network picked it up!

But for now, the only Sabrina we're going to be seeing soon is the dark, horror-infused take that The Chilling Adventures of Sabrina will introduce us to next year. Earlier this month, Archie Comics boss John Goldwater confirmed that the new Sabrina series will premiere in 2018, which likely means it will air alongside the third season of its universe-sharing counterpart Riverdale, expected to premiere towards the end of next year.

Fans are eagerly waiting to see if Sabrina will make an appearance in the currently airing second season of Riverdale before her spinoff kicks off after it ends. I guess Melissa Joan Hart's statement confirms there won't be any cheeky stunt casting from Sabrina the Teenage Witch in the new show... or at least nothing that's been discussed yet.

More like this
In 'Riverdale' Season 5, Toni Topaz Is The Black Superwoman Without A Cape
By Erika Hardison
6 ‘Schitt’s Creek' Spinoff Ideas That Are Simply The Best
By Rachel Varina
What Are The Eldritch Terrors In 'Chilling Adventures Of Sabrina'? They're No Joke
By Dylan Kickham
Stay up to date