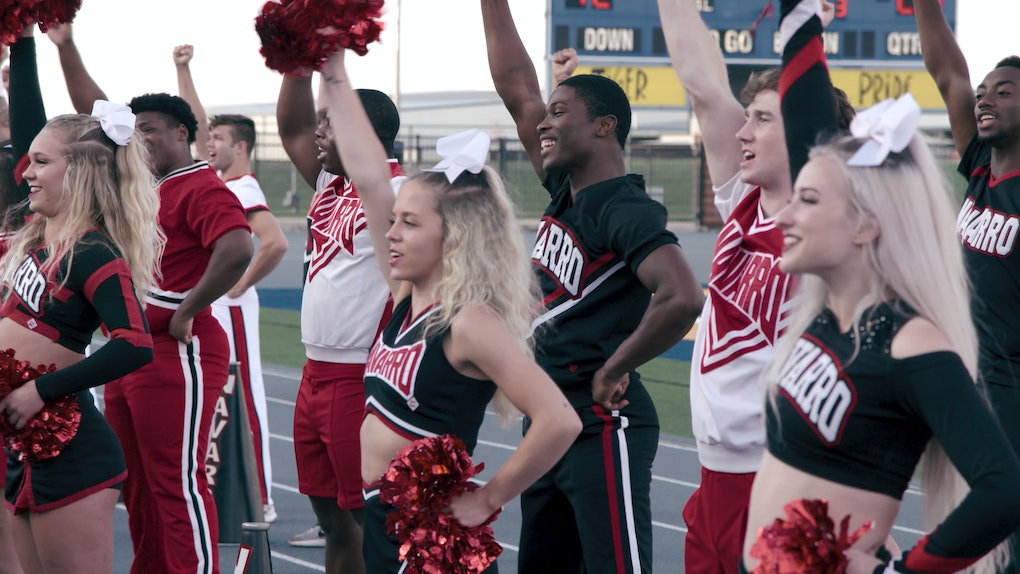 There's some sad news for all you Cheer fans out there. The competition the Navarro athletes work all year to preform at — the NCA National Championships in Daytona Beach, Florida — is officially not happening this year due to coronavirus concerns. If that's not bad enough, the Cheer stars' Instagrams about NCA Nationals being canceled will bring fans' heartbreak to a new level.

Cheer, which debuted on Netflix in early 2020, followed the Navarro College cheerleading team in their quest to earn another national title at the 2019 NCA National Championships. Because of the show's overwhelming success, many viewers were hopeful a Season 2 would be created for the 2020 cheerleading season, following Navarro yet again for another season. There is still no official word from Netflix whether a second season of the docuseries was ever picked up, but regardless, any hopes fans had of watching Navarro compete at the 2020 championships have now been squashed.

On March 15, Varsity Spirit, the company that hosts the competition, announced the decision "to not proceed as planned with scheduled events for at least the next eight weeks of the 2020 competition season" on its website. In response, members of the Navarro team took to Instagram to vocalize their disappointment about losing their chance at another national title. It was the last chance for many of these athletes to cheer competitively for Navarro, since, according to the Universal Cheerleaders Association rulebook, "any student athlete will only be eligible to compete in a maximum of three years or championship seasons during the course of his/her junior college career."

After learning of the cancellation, Gabi Butler posted a photo from a Navarro practice, with the caption: "This is not a goodbye... just a see you later," which might suggest she planned on returning for 2021. However, since 2020 was her third season on the team, it's likely she's no longer eligible to compete with Navarro moving forward.

Another fan-favorite, La'Darius Marshall, posted a video — one that actually went viral before Cheer even came out — with a lengthy caption. Although he wrote "see you later" in the post, he also suggested his cheerleading career was over. As with Gabi, 2020 marked La'Darius' third (and likely final) season to compete with Navarro.

Shannon Woolsey, another Navarro squad member, explained she had "uncontrollable tears" running down her face as she posted about the news.

While this marks an unfortunate ending for some of the Navarro cheer team members, the cancellation is in accordance with the CDC's recommended guidelines to cancel or postpone events with 50 or more people, which was announced on March 15. For more Cheer content, fans can rewatch Season 1 of Cheer on Netflix now. It could be the perfect content to take in while you practice social distancing.

More like this
'Emily In Paris' Season 2: Premiere Date, Trailer, Cast, Filming News, & More
By Dylan Kickham and Ani Bundel
Are Chloe & Mitchell Dating After 'The Circle'? Chloe Has An Update — EXCLUSIVE
By Dylan Kickham
Lana Condor's Career Goals Are All About Representation — EXCLUSIVE
By Rachel Varina
Stay up to date