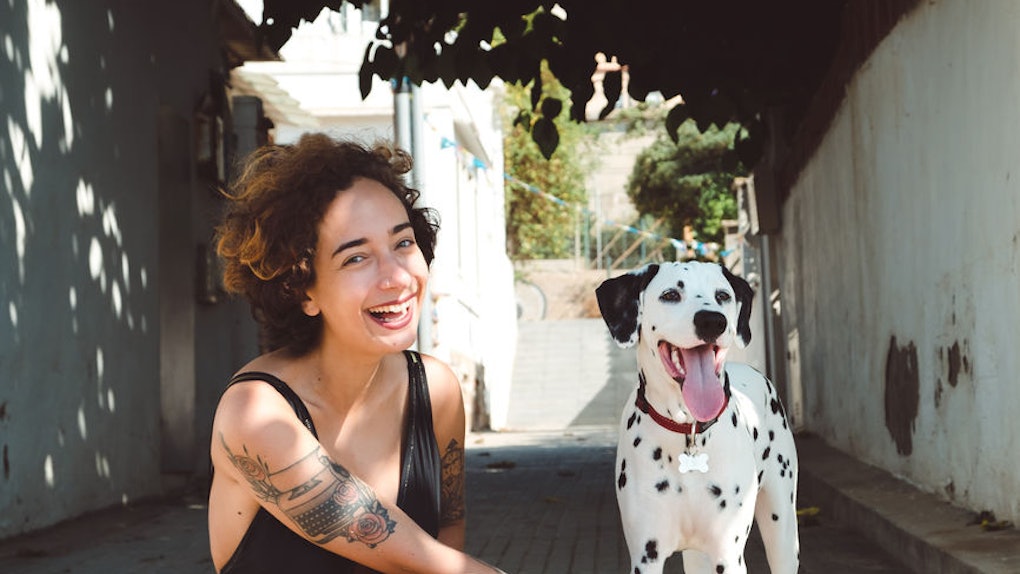 Admit it: There are days when you would rather just stay at home, curled up with your dog than go out with friends — or heck, days you would rather do just about anything with your dog than see your friends. But it's maybe a little harder to admit you might prefer to go to the park with your pup instead of dinner with your SO. And while you probably know how much you love your darling pooch (so much) the bond between dogs and humans in general might be more intense than you think. According to a new study, a whole lot of women would legit prefer to be with their dogs than with the people they are closest to in their lives.

The survey, done by Purina, asked over 1,000 dog owners to spill the deets about their relationships with Rover. First of all, while it's no surprise on this one, 95 percent of people surveyed consider their dog to be part of the family — which begs the question: Who's in the 5 percent that thinks otherwise? I want names.

Beyond that, though, 55 percent of dog-owners in the survey said they use their dogs as a kind of, well, therapist if you will, admitting that their dog "provides emotional comfort after receiving bad news," according to a press release about the survey. What's more, 62 percent said their dog helps them de-stress after a long day at work. After all, what's better after a hard day than petting your pooch and playing catch at the dog park?

But the most striking, and perhaps most hilarious statistic was this: Half of the women surveyed said they'd rather spend time with their dog than with their SO, or even their family.

Perhaps it's because the whole concept of unconditional love seems to be something dogs have wired into their DNA, you know? Plus, when you complain about stuff to humans, they talk back. Dogs just listen. Because dogs are the best.

Another hilarious, but darling doggy detail the survey brought to light? A whopping 56 percent of millennial dog-owners said they've treated their pups to birthday cakes, and 77 percent said they feed their dogs before they sit down for their own meals. I mean, personally, I can understand that last one. Have you ever tried to eat your dinner with a hungry, whimpering pup begging for a bite every time you lift your fork? It's cute for the first, like, 10 seconds, but it's a little less cute when your doggo jumps on your kitchen table to help themselves.

So what was Purina's point in asking all these questions about dogs? Well, partially, it was just to validate how deep the bond runs. Julia Pitlyk, brand manager for Just Right by Purina, said in a press release,

Having dogs myself, I know firsthand that the emotional connection between dog owners and their pets runs deep.

We conducted this survey to learn more about what exactly the owner-dog relationship looks like and while each relationship provides that deep connection, the results really support our belief that every dog is unique – some may be confidants while others are effective wingmen.

And speaking of wingmen, 15 percent of straight men surveyed by Purina said they feel their dogs have definitely helped them get attention from the opposite sex. Little do they know their future SOs might just end up liking that dog better than they like them, huh?

More like this
HomeGoods' Hideout Contest Treats You To A Relaxing Solo Getaway & Free Merch
By Marisa Casciano
Your Favorite Way To Escape From Reality, As Told By Your Moon Sign
By Roya Backlund
Can I Exercise After A Flu Shot? Experts Recommend Listening To Your Body Post Vaccine
By Georgina Berbari
Stay up to date