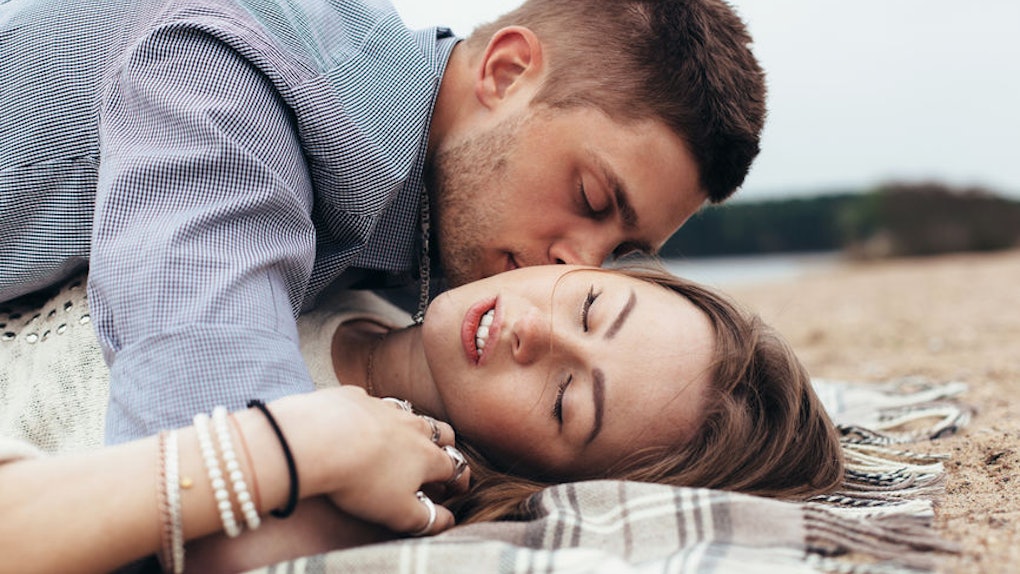 The Blood Moon Vs. The Full Moon Shows A Difference In Intensity When It Comes To Your Sex Drive

So, I'm pretty sure you've heard about tomorrow's Blood Moon and total lunar eclipse, right? Well, this lunation is said to be unlike any other full moon in history. So much so, you'll probably notice the difference in your sex drive during the Blood Moon vs. the full moon. I'm not kidding, tomorrow's moon will be one for the books. Plus, isn't there a song called "Total Eclipse of The Heart"? Exactly my point. Granted, we're not all on the same sexual wave length, but at the end of the day, we're all still very much connected, energetically speaking, of course.

Truth is, there are so many things to learn about the moon and its feminine pull. This is especially true for women, of course, considering the moon is said to govern our menstrual cycle, not to mention our mood swings. (Although, I'm pretty sure men get their period, too. Just saying.) Incase you weren't aware, we are the daughters of the moon. For instance, if a woman starts her menstrual cycle during the new moon, she will automatically ovulate during the full moon phase, which basically means she's extra fertile, and officially morphed into her horny she-wolf self. Yes, I know, being a woman is a magical thing.

Now, before we talk about your lunar libido, here's a quick overview of the full moon and Blood Moon:

A full moon occurs when the moon sits across the sun, and is illuminated by the sunlight. The moon rules our emotions and shadow side, so during this moon phase, our feelings are heightened. In astrology, the sun and the moon are on opposite sides of the zodiac wheel during a full moon. This is what creates that sun vs. moon and yin vs. yang vibe, which ultimately shows us the true meaning of balance. Something else to keep in mind is, full moons are a time of completion. The ancients used to plant their seeds, aka set intentions, during the new moon, in hopes of seeing it flourish during the full moon.

For starters, a total lunar eclipse, aka Blood Moon, happens when Earth takes position between the moon and sun. This ultimately blocks out the direct sunlight that normally makes the moon glow whitish-yellow. This is when the Earth reflects a bending red light onto the moon, which gives the moon a reddish-orange color. Now, in terms of potency, a lunar eclipse isn't just a regular full moon, on the contrary. Eclipses tend to spark life-changing events, that can come with either a new beginning or a much-needed ending. In this case, lunar eclipses represent endings, so this energy will push us into taking action wherever need be.

Now, let's be honest, every woman's sex drive is different. In terms of potency, the Blood Moon wins, by a long shot. However, in reality, your libido depends on your moon cycle. (Unless the moon transit is strongly aspected in your natal chart.) In the end, it's either going to be one of two things: You're either going to feel sensitive, lethargic, and in the mood to hide, or creative, centered, and wildly passionate.

You'll know right away, trust me. Maybe it's just me, but I can almost sense the effects a week prior. Although, I'm normally very tired whenever there's a full moon, and this lunar eclipse is already giving me the nervous jitters.

One thing I always recommend to my girls is, keep a moon journal handy. You'd be surprised with the themes and synchronicities you find along the way.

True life: the moon is your homegirl.