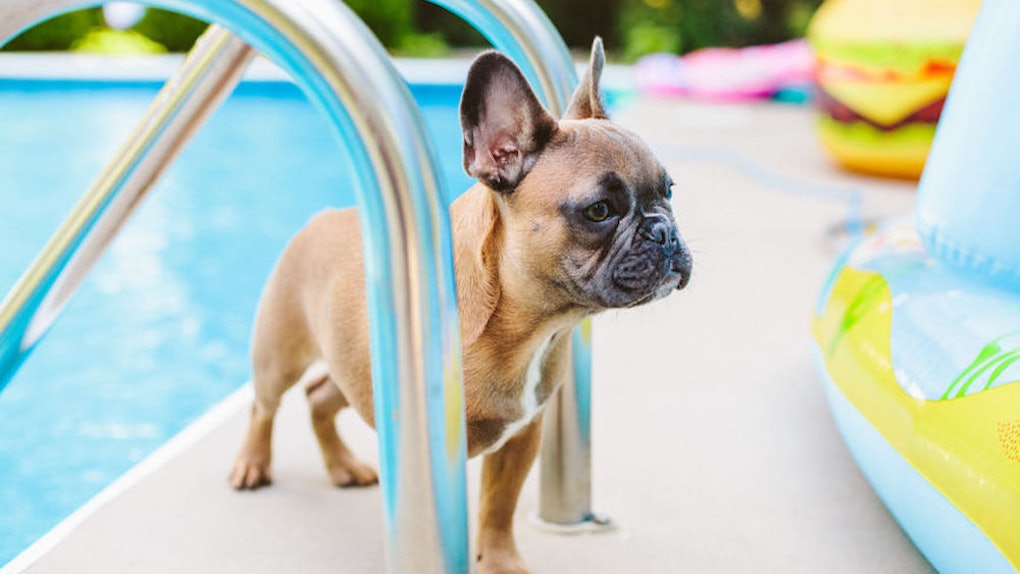 It may be pretty hard to believe, but there is someone on this planet who loves summer more than you. *Cue the gasps.* It's not your roommate, or even your sister who's been texting you a countdown to your family's annual barbecue on the beach. Spoiler alert: It's your pup — aka, your very best friend. Yes, your pup truly loves the season of sun, surf, and sand. They love diving into the waves and chasing balls in your backyard, without having to dodge big piles of snow. You can expect that they'll be wagging their tail for the next few months, and maybe pointing out the best pool floats for dogs online. Actually, pointing out picture paw-fect pool floats is my job. Sorry about that!

Don't get me wrong, your pup tapping their paw against your laptop screen while you casually hit the "Add to Cart" button would be cute AF. My heart is exploding just thinking about them gazing over at you with those puppy dog eyes, and whining when a flamingo-shaped float appears. But, even though they're so good and smart, they don't know exactly how to pick out items that are Instagram-worthy.

Let's be honest: That's the real reason why you're looking for a float for your pup this summer! You want to up their social media game, let them have a blast, and show the other pets who's boss. You'll need (or all) of these five pool floats then, huh?

1. This Convertible Float Will Be Their New Favorite Thing

One of your pup's favorite things to do in the summer — or any time of the year for that matter — might be going for rides in your car. They rush to the front door whenever you say, "Wanna come with me?" and happily bark at the idea of catching breezes beyond your cozy backyard.

They stick their head out the window, and other drivers always wave to them at red lights. Honestly, if I were a dog, I think I would love these little opportunities to get out in the real world and soak up the sun, too. Well, assuming I didn't have this convertible pool float.

You see, this float combines everything your dog loves from hanging in the pool to riding in style. Pick up one, and you'll make their day over and over again.

2. This Float Will Let Them Relax When Things Are Ruff

Even dogs need a break sometimes. Chasing sun beams, being cute AF, and chewing on bones all day long can get exhausting. Not to mention, bringing you toys requires walking up a lot of stairs, and welcoming visitors is an emotional rollercoaster ride. (Can I get an, "Ugh?")

It's #necessary, then, to hit the virtual "pause" button for your pup every once in a while and encourage them to just lounge. Give them some extra treats, cuddle up and watch a movie on the couch together, or hang by the pool for an entire afternoon.

If you're looking for a float for that kind of occasion, then this one will really be pawfect, because it's covered in, well, paws! It'll be comfortable for your dog, and remind them that even though life can be ruff, it's also full of good times and tennis balls.

3. This Paw-Shaped Float Will Stand Out On Social Media

When I think of Instagram-worthy content, I always imagine the colorful walls influencers pose with, or an açaí bowl that's been perfectly put together. I think of throwing peace signs in the air in tropical places, or taking cute selfies with my best friends.

For a pup with a social media account, though, I think of a pool float like this. It's bright, paw-shaped, and will make your dog glow like the sun. It's basically your pet's version of a colorful wall, like the ones on Melrose Avenue in Los Angeles.

Most importantly, it's a relaxing place to chill when the sun is at its peak and summer is blooming in full force. Pull your camera out now, OK? You won't want to miss a minute of the cuteness.

4. This Yacht Float Will Make Your Pup Look Like A Su-Paw-Star

You love to spoil your pup. Of course, you buy them the coziest beds to sleep in, and new toys (in addition to extra treats) when they've been particularly good. Long story short: Your pup is living their #bestlife.

But, this summer, you'll upgrade their lifestyle even more with this yacht pool float. You'll put them on it, maybe in one of their favorite outfits, and let them hang in the pool. At some point, you'll pull out your camera or iPhone and snap a few pics, too.

You already know that, in that moment, you'll forward those snaps to your bestie and say, "I'm sending this to NASA, because my pup is a su-paw-star." I couldn't agree more.

5. This Floating Toy Will Upgrade Your Pup's 'Gram And Next Game Of Fetch

Aside from all the pool floats your pup can relax on, are toys that are meant for summer and upgrading your pup's 'Gram and quality games of fetch. For instance, there's this adorable turtle-shaped squeaky toy that will be perfect for playing with your pup in the pool, or outside of it, right in your backyard.

It floats so that, if your pup decides to splash, it doesn't get lost in the deep end. It makes a noise every time your pup grabs it as well. (Sorry in-advance to your neighbors!)

The best part? Well, probably that it takes your BFF's summer to the next level. I'd say that's always pretty pawfect, and picture-worthy, too.