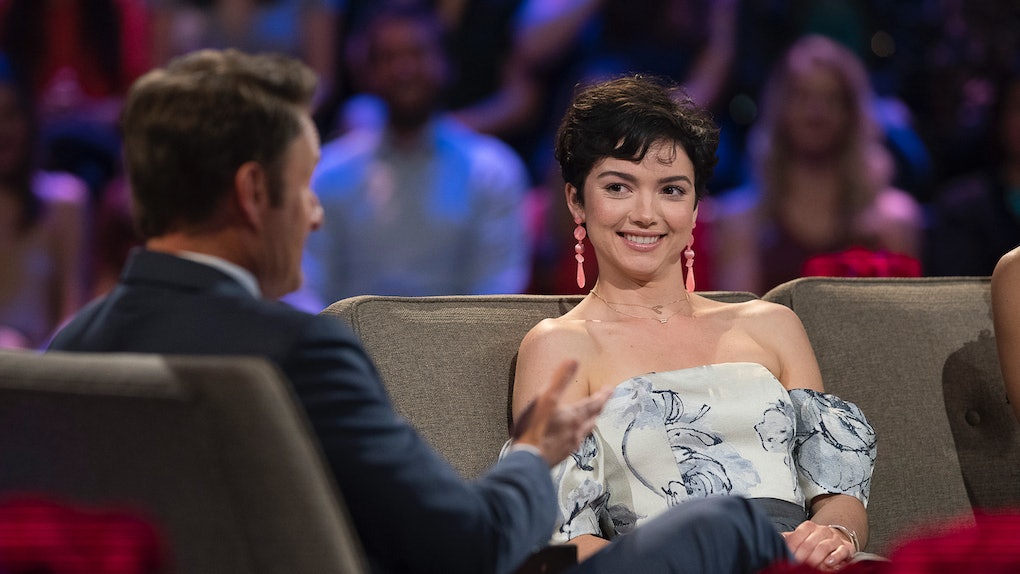 'The Bachelor's Bekah M. Announced Her Pregnancy In The Most Adorable Way

Congrats are in order for a certain fan fave Bachelor alum! Bekah Martinez from Arie's season didn't make it to Bachelor in Paradise Season 5 over the summer, but that's because she had not only one (she's in a serious relationship), but two pretty valid reasons. The Bachelor's Bekah M. announced her pregnancy in the most adorable way on the morning of Wednesday, Sept. 12. The 23-year-old took to social media to tease the joyous news.

"Everybody y'know was wondering like am I, was I gonna to do Bachelor in Paradise. And I had already said no but it was still kinda ocrazy that I had this secret of not only do I have a boyfriend, I..." declared in a cryptic Instagram video that cut off before she could continue to finish her thought.

Bekah officially confirmed that she and her boyfriend of seven months, Grayston Leonard, are expecting a baby in an interview with PureWow.

“I was in disbelief and thought, ‘Is this really happening?’” Martinez recalled to the publication. “I immediately called Grayston and then went across the street to the Dollar Tree and bought two more pregnancy tests. They, of course, were both positive.”

Bekah shared a full video of the announcement on YouTube. The video not only discusses her pregrancy, it looks back at her relationship with Grayson and his reaction to the baby news.

"The first thing I felt when I saw the positive was just pure shock, like my hands were shaking," she opened up.

"The thing that is so crazy is that I don't know if there's any part of me that actually. I knew there was a possibility that I was pregnant. I don't know if there was any part of me though that actually thought it was real, that it was actually happening to me," Bekah added of the "surreal" experience in a voiceover over footage of her ultrasound.

Bekah became a household name amongst Bachelor Nation during Season 22 of The Bachelor, which premiered in January 2018. Not only did the Los Angeles nanny stand out because of her refreshingly spunky personality and witty honest commentary — she made headlines because of her age. At 22, she was the youngest contestant on the show. That piece of info dominated much of her storyline and had a hand in Arie sending her home in week 7. After her exit, fans hoped she would be headed to Mexico for more romantic endevors on Bachelor in Paradise, but she decided to opt out upon revealing she was in a committed relationship with new beau Grayson.

“I think pregnancy is better than Bachelor in Paradise. Although I’m probably equally as sweaty, exhausted, nauseous, stressed out and emotional, at least I don’t have to worry about finding a man. I already have that one covered," she explained to PureWow.

I don't think viewers will be seeing Bekah on any future Bachelor shows any time soon. Congratulations to her and Grayson on their upcoming bundle of joy.