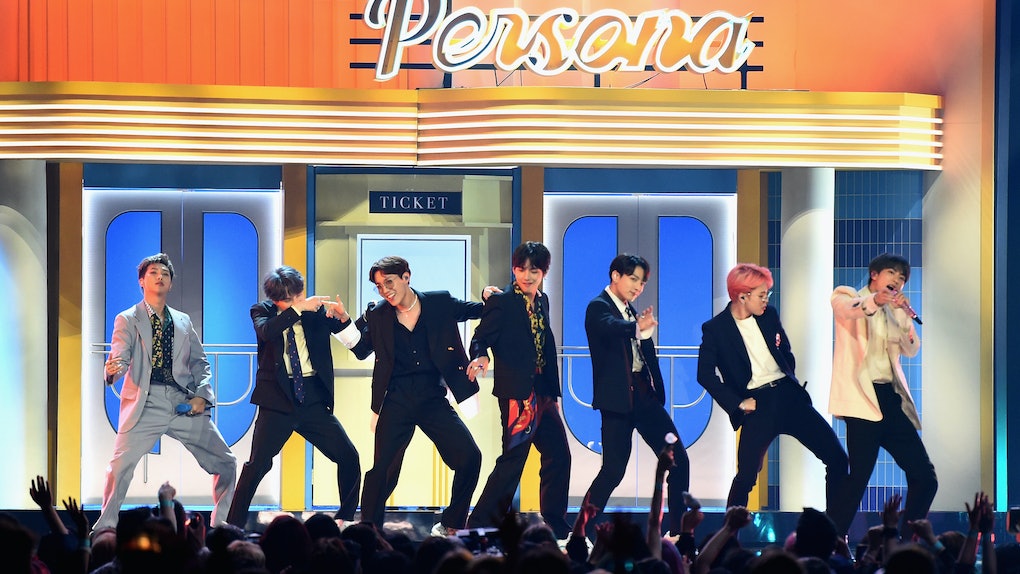 After almost a month-long hiatus, BTS is officially back on tour. RM, Jin, Suga, J-Hope, Jimin, V, and Jungkook hit the stage in Osaka, Japan on July 6, 2019 to perform their first of two Osaka shows at Yanmar Stadium Nagai. As usual, the concert was absolutely epic, and though its hard to pick the top moments from a performance filled with top moments, here are the best five moments from BTS' Osaka, Japan concert that you'll want to watch on repeat.

BTS' Love Yourself, Speak Yourself world tour to promote their latest album, Map of the Soul: Persona, started off in early May at a sold-out Rose Bowl Stadium in Los Angeles, California. After two shows on the West Coast of the United States, the boys traveled to Chicago, Illinois and East Rutherford, New Jersey, before hitting São Paolo, Brazil; London, England; and Paris, France. After the second Paris concert on June 8, BTS took a month-long break from touring. The break wasn't actually a break, though, because the ambitious K-Pop group just kept working — they put on a two-part Muster in their home country of South Korea, and they even dropped a full music video for their song, "Lights."

But, the group came back stronger than ever and delivered some powerful performances and hilarious shenanigans at their first Osaka concert on July 6. Check out these amazing moments from BTS' first night in Japan on their Love Yourself, Speak Yourself world tour.

1) V Fell Backward While Playing With A Hose

There was a lot of water action at the Osaka concert that included a giant hose used to cool down the audience. Though the hose was used more than once, V's time with it resulted in a — shall we say — "special moment" that had fans giggling and smiling at the BTS vocalist. When V picked up the hose to spray the audience with a cool mist, he was thrown backward by the water pressure and nearly fell, making the crowd in front of him erupt with laughter. V, being the great sport that he is, walked off and immediately got back into the performing headspace. Thankfully, it looks like V wasn't injured by the hose mishap.

2) Jungkook Flew Over The Crowd While Singing "Euphoria"

Jungkook took to the skies at the July 6 Osaka concert when he literally flew over the audience while singing "Euphoria." The singer was rigged to a thin black contraption on which he glided around effortlessly while still keeping his vocals sharp and impressive. Osaka isn't the only city to experience Jungkook flying — the K-Pop star pulled the same stunt while performing the same song at the Rose Bowl in Los Angeles back in May. I don't know about you, but I'm deeply jealous of ARMYs that got to witness this.

In typical K-Pop fashion, Jin arrived in Osaka with a brand new 'do, sporting a purple hairstyle that fans loved. Twitter user @jinoverdose, for example, tweeted, "IM SAYING THIS AGAIN, JIN LOOKS SO DAMN HANDSOME WITH PURPLE HAIR AAAAAAH." Another Twitter user, @oshvantae, wrote, "[S]o purple jin is back. he must have heard me when I said it's one of his best hair colours."

Of course, ARMYs expect expert choreography from the boys, but an ad-libbed move is always appreciated. During their performance of "MIC Drop," the boys gave fans a stellar performance, and an expert mic drop at the end of the song was the cherry on top. Fans on Twitter were so here for it, saying things like, "Mic drop never fails... to actually kill all of us." By sending a peace sign kiss to ARMYs right before the drop, I think it's safe to fans will be playing this performance on repeat for days to come.

During one of the performances, the K-Pop group's dance moves included full body rolls that were honestly so cool. While everyone was doing the rolls so well, Jin's movements in particular stood out for being so fluid and impressive. Twitter user @JinSofty commented on Jin's move, writing "Jin's body rolls will kill me one day." Same, @JinSoftly, same.

Well, there you have it, five noteworthy moments from BTS' first performance in Osaka, Japan. Now, I can't wait to see what they have in store for night two's performance.