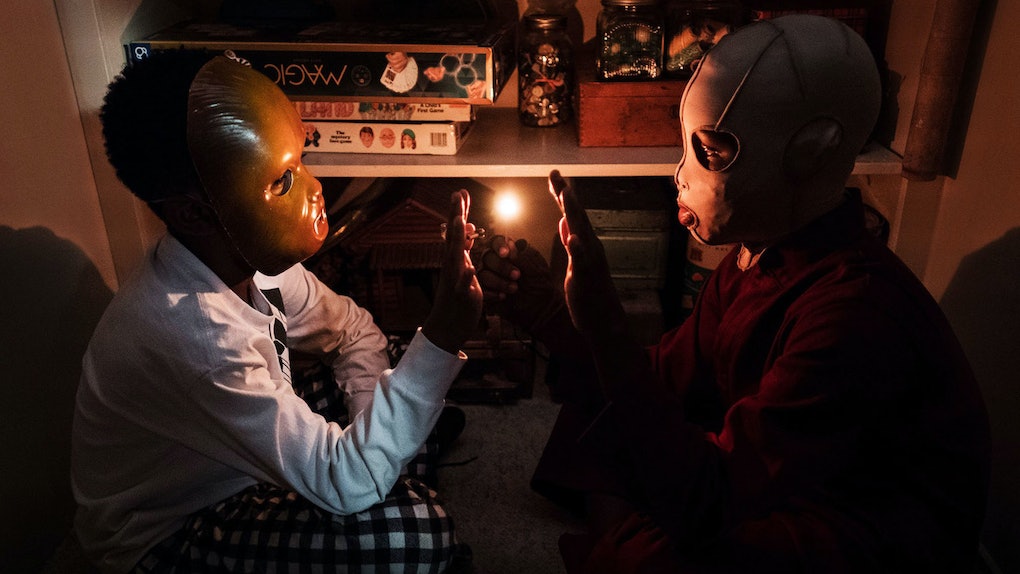 That Popular 'Us' Fan Theory About Jason Isn't Real, According To Jordan Peele

Jordan Peele's latest horror opus Us left fans with a ton of questions, but now Peele is addressing one of the biggest fan theories developed around the movie. The brand new Blu-ray and DVD release of Us comes with a featurette in which Peele goes in depth about all the subtleties in the movie and his vision for the twisted story, and that includes debunking one of the most popular theories about the movie. Peele himself has confirmed that the popular Us fan theory about Jason isn't real, even though it did sound pretty convincing at first.

Spoiler alert: This post contains spoilers from Us. Shortly after Us hit theaters earlier in 2019, the internet exploded with theories about the puzzling, open-ended movie. One of the theories to blow up the most revolved around the chilling final scene in the movie. While driving away from Santa Cruz, the movie hits us with an unexpected flashback that shows Red (Adelaide's Tethered doppelgänger) had actually switched placed with Adelaide when they were children and has been posing as her for all these years. In the car, Adelaide (whom we now know is actually Red) smiles at her son Jason, and Jason responds by pulling down his mask. This moment kickstarted a viral theory that Jason was also secretly an escaped Tethered like Red, and the mask action was a way to communicate that he knew to keep his true identity hidden.

There were a lot of things that fans pointed out to bolster this theory that Pluto had actually swapped with Jason years prior to the events of Us, including Jason's proclivity to play in dark closets and his drawings of the underground lab's iconography, but Jordan Peele offered up the real reason why Jason seems to be a bit more knowledgable about the Tethereds than he should be.

In his commentary on the newly released Us Blu-ray and DVD, Jordan Peele stated that he viewed Jason as something of a wizard or magician, who is able to see glimpses of the truth beyond what everyone else can see. That is why he appears to be on to Red's switch with Adelaide and the underground world of the Tethered, not because he actually is a Tethered.

I always thought of the family in terms of a certain archetypal foursome. Adelaide is the leader, the captain. Zora is the warrior. She acts before she thinks and she kicks ass. Gabe is the fool, even though on the surface he looks like he might be the leader or the warrior. And Jason is the wizard. He’s the magician ... I have this kinda concept of Jason that he can sorta see through the veil. You can see these moments where he’s observing his mother and he’s meant to be a little step ahead of us, the most clever of us that’s sorta figuring out there’s something more to Adelaide’s story than we see.

So, I guess that is one theory that Us fanatics can officially cross off the list. Thankfully, there are still so many other unanswered questions about the movie to obsess over, and now that the movie has been released on Blu-ray and DVD, fans can learn even more about it.