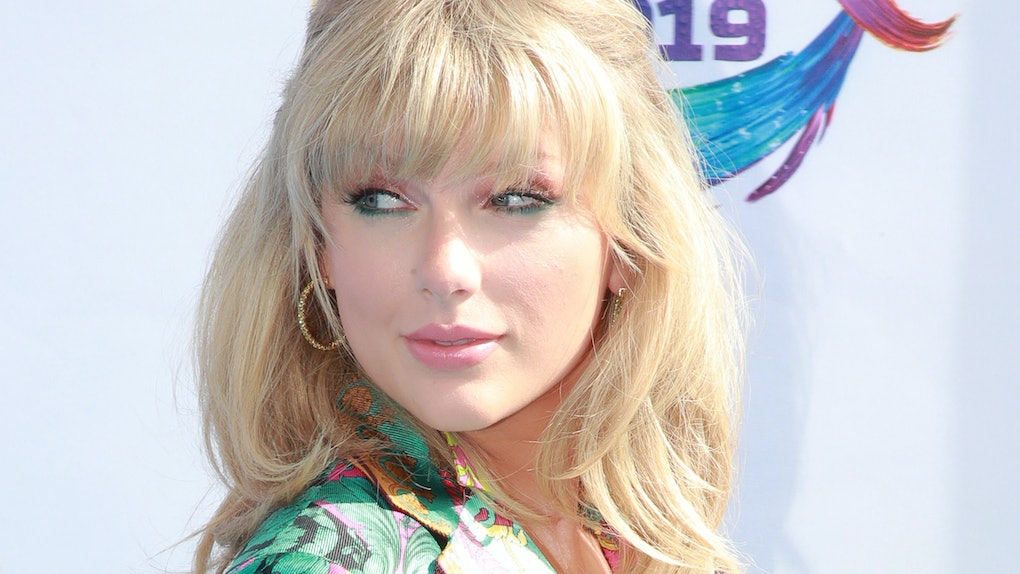 There were so many amazing moments that went down during the 2019 Teen Choice Awards on Aug. 11, but one of my faves was definitely Taylor Swift rolling up to the stage to receive the award show's first-ever Icon Award. TayTay is legit such a queen, and I can't think of anyone more perfectly suited to have this inaugural honor bestowed upon them. The "You Need To Calm Down" singer was predictably humble as she accepted the award, but she also took a moment to share an important message. Taylor Swift's Icon Award speech at the 2019 Teen Choice Awards was amazing, and if you haven't heard it yet you def need to get up to speed.

The TCAs first announced that they were adding the new Icon award to the roster on July 25 by sharing an image of Swift on the official Teen Choice Awards Instagram feed, and captioning it: "@taylorswift ➕ #TeenChoice = end game. Tune in LIVE August 11 to watch our QUEEN receive the inaugural Icon Award!"

Fox, which aired the show live from Hermosa Beach in California, also released a statement at the time about why the pop star was chosen.

"As one of the best-selling music artists of all time, with more than 50 million albums sold, Taylor Swift is a pop culture icon whose accolades and achievements go beyond topping music charts and selling out stadiums worldwide," the network said in a statement, according to Variety. "Swift is also one of today’s biggest social influencers, using her voice and platform to inspire and create positive change."

Alex Morgan, a star player on the World Cup-winning U.S. women's national soccer team, introduced Swift on the Teen Choice Awards stage. She started by listing off some of Taylor's biggest accomplishments, including holding the record for taking home the most surfboard awards in Teen Choice Awards history (25!). She then quickly segued into her friend's more personal accolades, namely, her advocacy for gender equality.

"Taylor uses her platform to be a role model for positive change," Morgan said in her introduction speech. "To break barriers, to stand up for gender equality, including equal pay for men and women." Morgan also listed off some of the causes Swift assists financially, including "libraries and literacy programs, schools and animal organizations, survivors of sexual assault, victims of floods and hurricanes, and much more."

Before Swift took to the stage to accept her award, a video played, honoring her. Celebrities including Haim, Ed Sheeran, Wiz Khalifa, Hayley Kiyoko, Troye Sullivan, and Jameela Jamil shared words of admiration for the star, reinforcing her status as an icon.

By the time Swift was at the microphone, the audience's cheers were so loud, she had to stop and chuckle before speaking. But when she did speak, she shared some important words.

First up was a shoutout to her friend who introduced her:

First I want to talk about Alex Morgan. The fact that she's here presenting this to me is such an honor.

It was the perfect segue into the next part of Swift's speech, addressing the need for everyone in the country to be treated equally.

Not only winning the World Cup with her amazing teammates... but while they were winning the World Cup they were also taking a historic stand in terms of gender equality, gender pay gap. This isn't over yet; it's not resolved. What happened to them is unfair and it's happening everywhere, and they are heroes and icons for standing up.

Taylor also gave her thanks to the Teen Choice Awards, especially for decking out her special surfboard award with pictures of the "itty bitty pretty kitty committee," also known as her cats Dr. Meredith Grey, Olivia Benson, and Benjamin Button.

Next up was a special tribute to some of Swift's most favorite people: her fans. "Thank you for giving me the life that I have," she said. "Every single minute of every day, I know that you're the reason that I have the life I have and that I get to do what I love doing."

Considering the awards show was geared specifically for teens, she also had super-pertinent words for her teenage fans.

Sometimes you think if you can try hard enough, make every decision perfectly, you think you can possibly like ace life and never make any mistakes. It's normal to make mistakes and I just want to let you know that if you're out there being really hard on yourself right now for something that's happened or messing up or feeling embarrassed —it's normal. That's what's going to happen to you in life. No one gets through unscathed; we're all going to have a few scratches on us. So just please be kind to yourselves and stand up for yourself.

Swift rounded out her truly iconic speech by dropping an announcement that her next single, Lover, which shares the name of her highly anticipated upcoming album, will be coming out on Friday, Aug. 16.

She may not have performed a song at the beachfront show, but Swift's acceptance speech was honestly entertainment enough. Plus, fans will get tons of amazing T. Swift content when her seventh studio album comes out on Aug. 23.