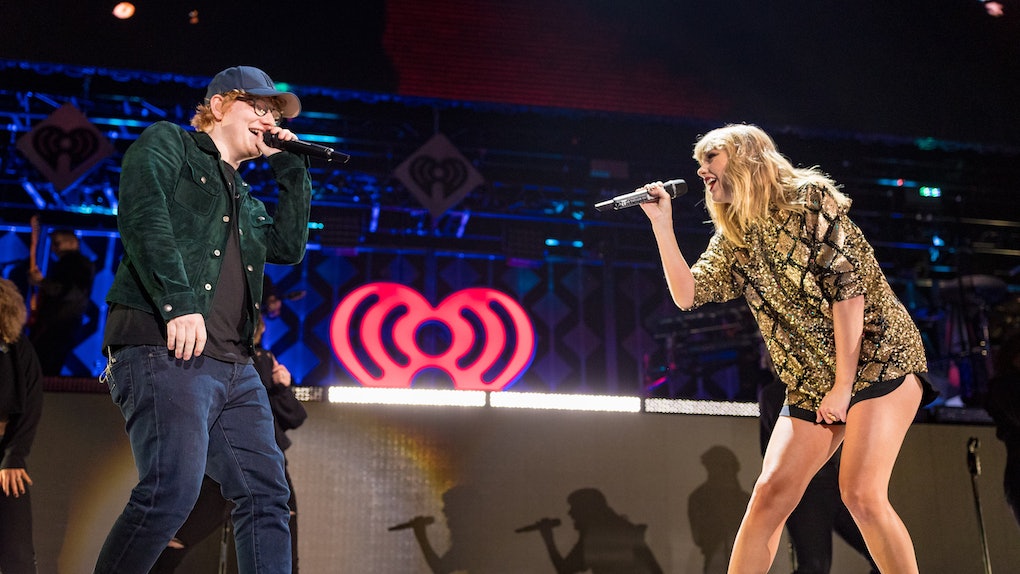 Taylor Swift's "End Game" music video has been released, and it's amazing. Swift has truly outdone herself and created a super fun and flirty video that perfectly fits the tone of the song. Swift got especially flirty with Ed Sheeran in the video. So much so that fans have actually started shipping them hardcore. Taylor Swift and Ed Sheeeran in the "End Game" music video actually have major chemistry.

On Jan. 11, Swift announced that she was dropping the "End Game" music video at midnight. YOU HONESTLY NEVER KNOW WHAT SWIFTY WILL DO NEXT. Obviously, people had speculations about what the video was going to be about and who was going to receive some shade. Surprisingly, Swift made a super cool video about partying all over the world and not too much shade was thrown.

What fans lacked in drama, Swift made up for with on-screen friskiness. Swift and Sheeran's chemistry was off the charts. He was also featured in two of the cities seen in the music video — Tokyo and London — while Future can only be seen driving Swift around in Miami.

Future's part is a lot shorter than Sheeran's, but kicks off close to the beginning of the song. The lyrics to Future's verse read,

I mean, don't get me wrong, Swift does look like she's having a good time with Future. They hang out on the front of mega-yacht and walk down a hallway together. All good stuff.

However, Swift can be seen taking shots with Sheeran, resting her head on his shoulder, and trying on his signature thick-rimmed glasses.

Sheeran and Swift have a very strong public friendship, but they looked so darn cute together in the music video that fans are here for Swift and Sheeran crossing the friendship line.

I don't know either of them personally, but I think Twitter wants this to happen way more than Swift and Sheeran do.

The lyrics Sheeran sings in "End Game" are romantic, so maybe it got everyone at the music video shoot in a lovey-dovey mood. Sheeran sings,

Maybe Swift and Sheeran were just staying true to the flirty music video vibes. Sheeran has shut down romantic rumors between him and Swift in the past. Like when he broke all our hearts by confirming that the song "Dress" wasn't about him and his golden tattoo. During a livestream with Augustman, the singer said,

I don't think it is [about me]. I think if you read into it... It's not... You know, because she mentions someone with a buzzcut hair cut, and I've never had a buzz cut hair cut.

Hard to argue with that. Even if Swift and Sheeran are just friends, their collabs are always amazing and they have great musical chemistry together. I hope more collabs come out very soon.

More like this
What Does Taylor Swift's Vault Door Video Mean? Fans Are Decoding It
By Cianna Garrison
21 Taylor Swift's 'Fearless' Lyrics For Throwback Pics That Belong On The 'Gram
By Rachel Chapman
Rosé From BLACKPINK's "Gone" Music Video Is The Ultimate Sad-Girl Aesthetic
By Abby Monteil
Stay up to date