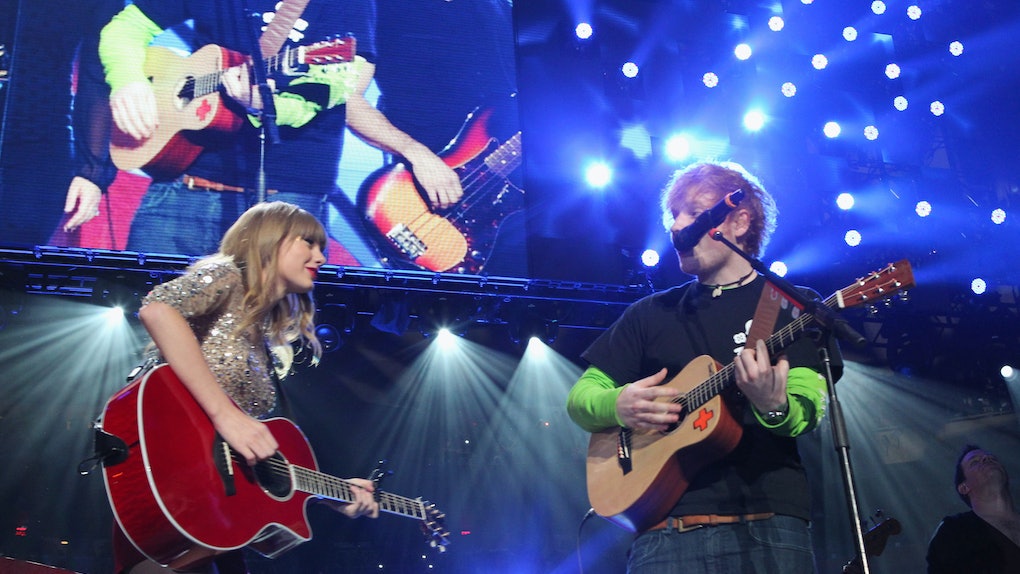 Taylor Swift's "Dress" Isn't About Ed Sheeran, So Everyone Relax

It's been an entire four days since Taylor Swift released her Reputation album and the internet has been freaking busy breaking it all down. Think pieces, blog posts, long essays, and thousands and thousands of tweets have been posted, all theorizing about the lyrics of each song and who they're possibly about. Let me help put one rumor to rest — Taylor Swift's "Dress" isn't about Ed Sheeran, so everyone please be cool.

When it comes to Taylor Swift, her reputation (ugh, sorry) is to write very specific songs about very specific guys. Understandably, fans have been reading into each and every lyric looking for clues about past relationships or flings. In the song "Dress," Swift references a "best friend" which had everyone shouting, "ED! IT'S GOTTA BE ED!"

Here are some of the song's sexy lyrics:

In your crowded room

They've got no idea

About me and you

There is an indentation

In the shape of you

Made your mark on me

All of this silence and patience, pining and anticipation

My hands are shaking from holding back from you (ah, ah, ah)

All of this silence and patience, pining and desperately waiting

My hands are shaking from all this (ha, ha, ha, ha)

Say my name and everything just stops

Only bought this dress so you could take it off, take it off (ha, ha, ha)

Carve your name into my bedpost

Cause I don't want you like a best friend

Only bought this dress so you could take it off, take it off (ha, ha, ha)

Hello, Taylor? Yes. You have my attention.

Beyond the "best friend" lyric, the another clue that has fans shouting "Sheeran!" is the golden tattoo reference.

For those of you who don't know, Sheeran has a seriously ginormous tat of a lion on his chest in, like, gold-ish colors. (I'd argue it's more orange and brown, but I'm not a Grammy winner or anything.)

Oh, oh, oh! There's also that whole "shape of you" lyric, which if you guys think about it IS ONLY THE TITLE OF ONE OF SHEERAN'S LARGEST HITS OF ALL TIME.

But sure! I'm sure this has nothing to do with him. Whatever you say.

When the Reputation hype was initially building, Sheeran revealed on the Capital Breakfast radio show he had a sneak peek... er, listen?... to the album. At the time, he said,

Yeah, Ed. I'm sure people will like the album.

Now, Sheeran is directly discussing "Dress," and honestly his response is kind of bumbling. During a livestream with Augustman, he said,

I don't think it is [about me]. I think if you read into it... It's not... You know, because she mentions someone with a buzzcut hair cut, and I've never had a buzz cut hair cut.

OH, THAT'S WHY? NOT BECAUSE YOU GUYS HAVE EVER SECRETLY HOOKED UP IN A SEXY BED THAT TAYLOR TALKS ABOUT A LOT IN THIS SONG?

The lyric Sheeran is referencing is:

Flash back when you met me

Your buzzcut and my hair bleached

Even in my worst times, you could see the best of me

Flash back to my mistakes

My rebounds, my earthquakes

Even in my worst lies, you saw the truth in me

I don't know, Ed, there's a lot more pointing to you than away from you, and people can't handle it.

I'm going to say this song is like one of those "choose your own adventure" books, so I'll just believe it's about Ed for my own happy ending. I mean, I've never met a wonderful, talented, kind, loving guy who Taylor Swift or I didn't like (and then immediately wrote a song about).

Love to love you two, Taylor and Ed, even if it's in my wildest dreams. Get it?!