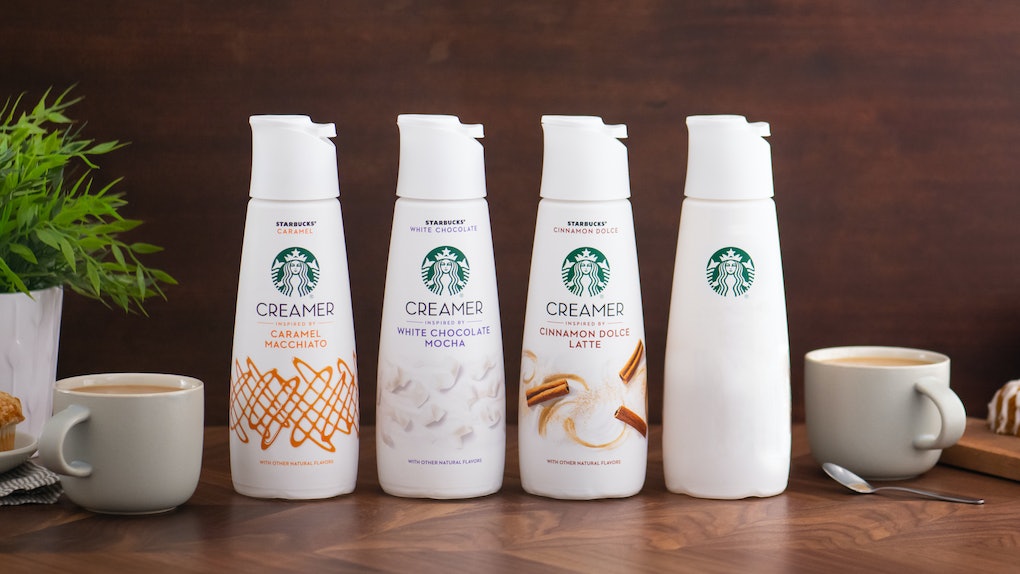 Start thinking about what your dream Starbucks Creamer could be, because the coffee company is releasing a brand new mystery flavor. In fact, the Starbucks' Creamer mystery flavor giveaway asks fans to guess the new flavor ASAP, before it even hits the shelves. If you're unable to contain your excitement, whip out some notes, because if you guess correctly, you could win yourself a bottle.

If you haven't been sipping on coffee with Starbucks Creamer since the products dropped online and in grocery stores nationwide in August 2019, you may have missed the initial Starbucks' announcement of the release on July 22. The partnership between Starbucks and Nestlé helped create these gems, and luckily for you, it's easy to find these Starbucks Creamers wherever groceries are sold.

But now, Starbucks has announced the release of a new Starbucks Creamer flavor for winter 2020. Only the catch is the brand is not telling you what the flavor is, and instead, calling it its Mystery Flavor. From Dec. 5 through Dec. 11, you'll get the chance to tweet your guess. If you're one of the first 50 people to guess the creamer's flavor correctly, you'll get your own bottle.

To join the contest is easy. Just open up Twitter, sign in, and start tweeting your guesses using the hashtags #StarbucksCreamerMysteryFlavor and #giveaway. Don't worry if you don't guess correctly, though, as the new Starbucks Creamer will be released in stores nationwide in January 2020. The winners will simply get a free sneak peek when they correctly guess the unknown taste. If this creamer is anything like the past flavors, it may be a bit idea to guess something off of the Starbucks menu.

If you're one of the fortunate 50 who guess the Starbucks Creamer mystery flavor right, remember me when you get your free bottle — I don't want to wait until January, either.