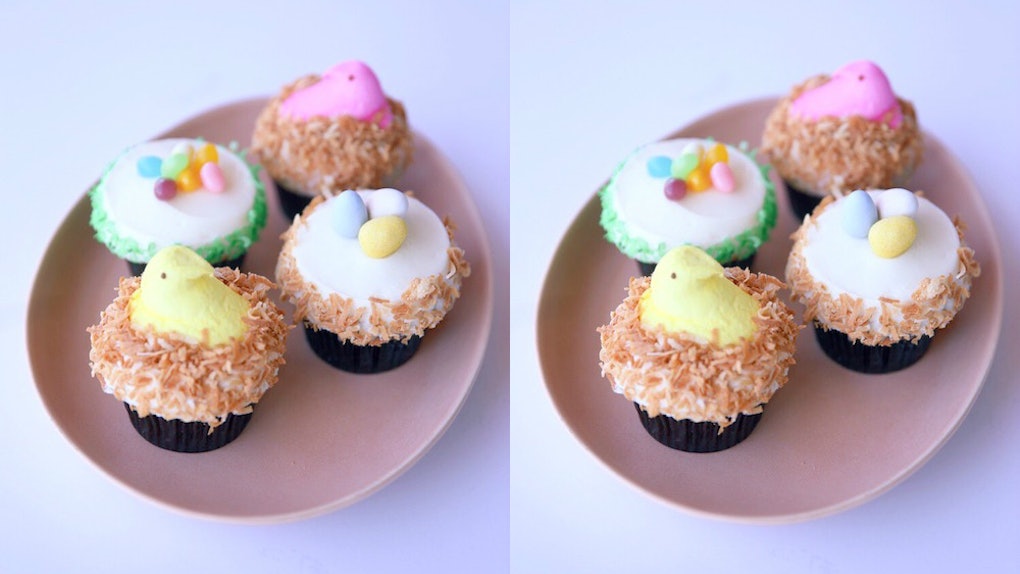 Aside from chocolate bunnies, Peeps marshmallows, and candied almonds, one of my all-time favorite Easter desserts is a good old-fashioned springy cupcake. Whether it's smeared with pastel-colored frosting, encrusted in sprinkles, or if it simply gives a nod to the famous Easter bunny, there's really no way you can go wrong. And if you haven't seen Sprinkles' Easter 2019 cupcakes, they quite literally take the cake for the cutest springtime desserts. They're so festive.

Popular California-based cupcake chain Sprinkles is throwing down hard for Easter this year with four new creations, and if you weren't able to tell, I'm really excited to try each and every one of them. According to the brand, all four of the limited-edition creations will be available for different weeklong durations between April 1 and April 21, so you'll definitely want to see the lineup before time runs out.

The first cupcake in Sprinkles' Easter series is called Robin Eggs, and it's perfect for any and every chocolate lover out there. It features a rich chocolate cake base, and it's slathered in vanilla buttercream frosting. The top is lined with a toasted coconut rim, and it's all sprinkled with chocolatey Robin Eggs candy. Seriously, she's a one-of-a-kind beaut, and she'll be available from April 1 to April 7. Get her while she's hot, people.

Next up is the sugar day-dream known as the Jelly Belly. It includes a sweet base of birthday cake, and the top is completely slathered in vanilla buttercream frosting. It's lined with a springy green coconut rim, and it's topped off with a handful of Jelly Belly jelly beans. If jelly beans tend to define your Easter festivities, this is definitely the selection for you. It will be available between April 8 and April 14.

Last in the lineup are Sprinkles' two Peeps flavors, and they're pretty ideal for any fruit and marshmallow enthusiast out there. One features a base of lemon cake, which is topped with lemon frosting. Then, it's finished with toasted coconut, as well as a yellow Peeps 'mallow. The other features Strawberry cake, which is slathered in strawberry frosting, toasted coconut, and a pink Peeps 'mallow. Both will be out between April 15 and April 21.

If you miss out on these though, don't worry — Sprinkles is known for coming out with festive cupcakes for many holidays. Last Halloween in 2018, they released a variety of super spooky flavors that definitely fueled my sugar cravings. Then for Galentine's Day in February 2019, they released a flavor to share with all your gal pals. They're truly the greatest way to celebrate.

Like most sugar lovers, I can always appreciate a solid Easter cupcake. And don't tell the other cupcake brands, but I couldn't be more excited for Sprinkles' four Easter flavors. Whether you decide to just try one of them, or get all four, during each week leading up to the holiday is entirely up to you. Either way, I know they'll make way for a super sweet holiday.