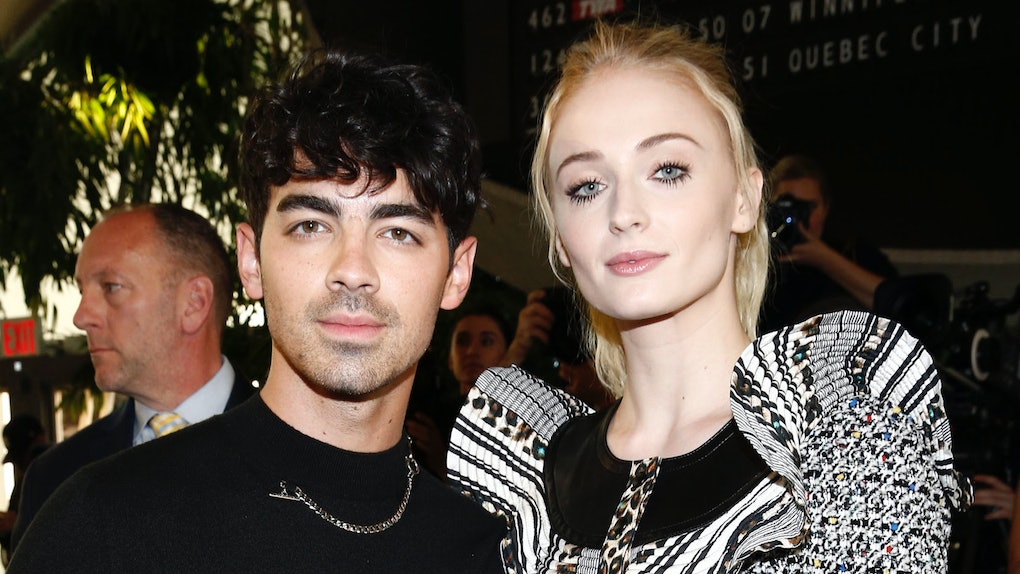 I'm just going to say it: Sophie Turner and Joe Jonas are the best Jonas couple. Facts are facts, America! The couple, who recently eloped in Las Vegas after the Billboard Music Awards, are always leaving fans gagged over their social media posts (Turner's "And that's the tea" Instagram stories are quite literally my favorite thing), and Sophie Turner's comment on Joe Jonas' Paper photo shoot Instagram has them gagged again.

The Jonas Brothers are in full-throttle comeback mode with their new album, Happiness Begins, coming out soon, as well as the documentary about their reunion. Their Happiness Begins tour kicks off this August, so naturally, the three brothers have a packed press tour to promote their comeback. Their latest press is a digital cover shoot with Paper magazine. The photos showed the guys dressed in ugly sweaters and creating their own take on those awkward family photo cards we all see at Target. They all straight-up look like Kip from Napoleon Dynamite in every shot, and I'm here for it. And apparently, so is Sophie Turner.

Kevin, Joe, and Nick did group photos for this shoot, as well as solo shots.

This is the group's digital cover for Paper's "Nowstalgia" issue.

I love these photos dearly.

Joe opted to go for a Ron-Burgundy-playing-the-jazz-flute vibe in his solo shots. He also posed with a ferret in another solo shot, and went a little cross-eyed in another. You can check out the jazz flute photo on Joe's Instagram.

Here's where Turner's comment comes in. The Game of Thrones star took to the comments section of Jonas' flute post (he literally has a flute strapped to his back, y'all) and commented something that nearly made me do a spit take.

"Everyone: 'You play jazz flute?' Me: 'I dabble,'" Jonas said in his caption, quoting the iconic jazz flute scene from Anchorman.

Turner slid into the comments section and said, "Daddy." Oh, my lordt.

Sophie Turner looking at all of these Paper photos like:

I am sweating. And so are fans of the couple on Instagram.

People are responding to Turner's "daddy" comment with their own comments.

"The jazz flute is what got u didn’t it," one fan commented.

"This is my kind of love," another said.

"She's definitely the daddy," another fan commented, speaking some universal truth. These two seriously have the best dynamic. 10/10 would approve. Great family fun.

When the couple eloped in Las Vegas on Wednesday, May 1, fans couldn't get enough of the two's aesthetic choices and overall personalities.

Eloping in Vegas with an Elvis impersonator officiating the ceremony was just so them.

The seemingly quick decision to elope in Vegas after the BBMAs was apparently made because their fancier wedding will be in France later this year.

“They had to get married in the States to make it legal, but the wedding is still in Europe,” the source told People.

At least one of the parties to be married must have resided in France for at least forty days immediately preceding the marriage. This precludes a wedding in cases where both parties are only visiting for a short stay.

So, there ya have it. Sophie Turner and her Joe "Daddy" Jonas are legally married, and will be tying the knot again later this year in France. No word yet as to whether or not Jonas will perform the jazz flute at the reception.

More like this
Is Taylor Swift's "Mr. Perfectly Fine" About Joe Jonas? Sophie Turner's Instagram Has Fans Curious
By Brandy Robidoux
Michelle Obama's Easter 2021 Instagram With Barack Is A Cute Photo Booth Moment
By Daffany Chan
Shanna Moakler's Instagram Comment About The Kardashians Is Peak Shade
By Candice Jalili
Stay up to date