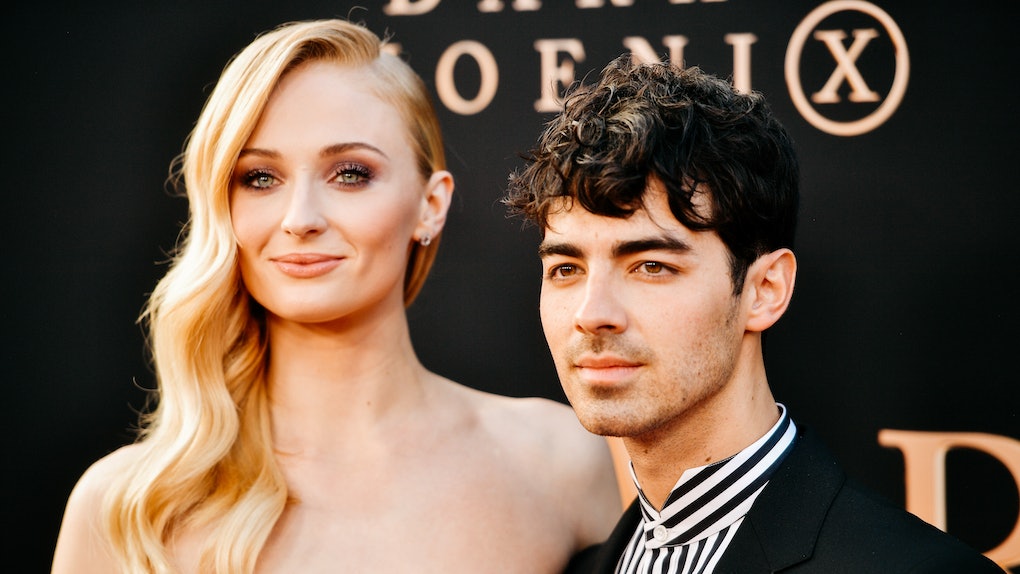 Ever since Sophie Turner and Joe Jonas were first spotted together at a Kings of Leon concert back in Nov. 2016, they've been serving up some major #CoupleGoals moments. Something about this pair just makes sense. and hearing them talk about their relationship only solidifies just how intense their love for one another must be. If Sophie Turner and Joe Jonas' quotes about their relationship don't make you melt, then I don't know what will.

The Game of Thrones alum and "Sucker" singer avoided discussing their relationship for quite a while before they finally went public. Although they had reportedly been seen cozying up on the regular, it wasn't until Jan. 2017, when Turner posted a photo of Jonas smoking a cigar on a boat in Miami, that it became crystal clear something was definitely going on. "I'm not saying anything... I'm very happy," Turner told Extra during a Golden Globes red carpet interview a few days after she posted the 'gram. Over the next two years, the duo made it clear they were the most adorable couple ever on countless occasions. Fast forward to May 2019, when Jonas and Tuner tied the knot during a spontaneous ceremony in Las Vegas, and again at a French chateau in late June. The rest is history!

Back in May 2017, the actress opened up in an InStyle piece about how much easier it was to be in a relationship with someone living a similar lifestyle as her.

In July 2017, Turner reportedly told the UK’s The Sunday Times that her relationship was private, but implied that it had helped her come out of her shell.

I’m in a relationship, but it’s a very private relationship... I very much isolated myself for a while and forgot what was fun. Going out with friends, going out to eat, not really having a care. And people I've met recently in my life have drawn me out of that. It really helps you own those insecurities. The things I tortured myself about before, I can forget about.

In April 2019, Turner made an appearance on Dr. Phil's podcast, Phil in the Blanks, where she discussed how much her relationship with Jonas helped her overcome depression. "I love myself now, or more than I used to," she told Dr. Phil. "I'm now with someone that makes me realize, you know, that I do have some redeeming qualities, I suppose, and when someone tells you they love you every day, it makes you realize why that is, and I think it makes you love yourself a bit more."

Needless to say, Jonas has also made it clear how big of an impact his relationship with Turner has had on his own life. In "Chasing Happiness," a documentary about how the Jonas Brothers grew their international fame, he opened up about finding love. "In finding myself, I was also able to find a partner," said Jonas. "The impact of falling in love has made me want to be a better man, a better person, and ultimately, made me a better brother."

In an interview with Harper's Bazaar published in June 2019, Jonas said witnessing Turner's relationship with her brothers was a source of inspiration when it came to strengthening his own familial relationships.

It encouraged me to see she had such a great relationship with her brothers. That was really a big thing for me to be able to look at, and say, 'I gotta get my sh*t together.'

It's so refreshing to hear about relationships that have helped both individuals grow into stronger and more self-aware versions of themselves. Now that Turner and Jonas are husband and wifey, there's no doubt they'll continue to put their powerful bond on blast. I, for one, can't wait.