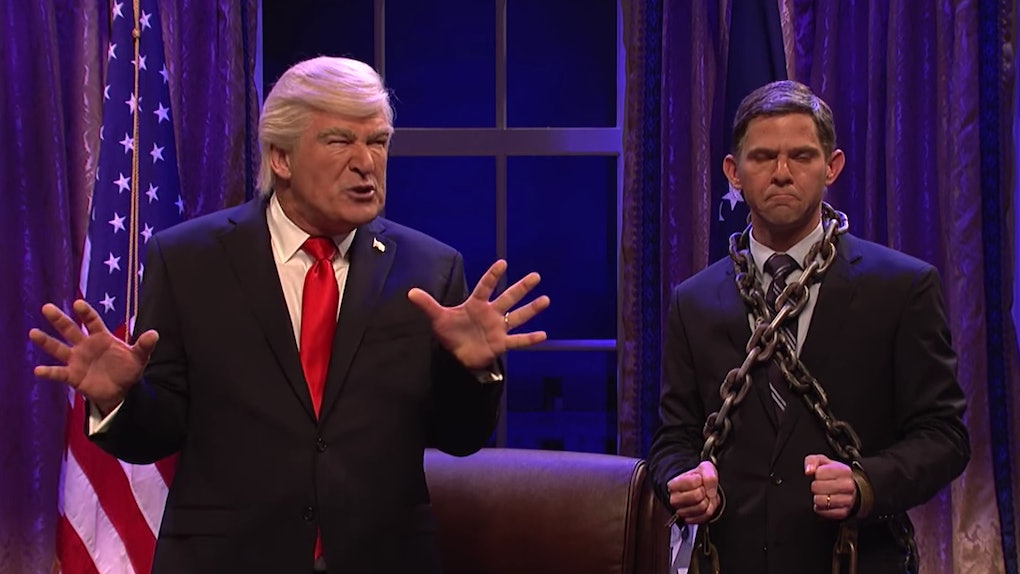 President Donald Trump and his administration gave SNL a lot to work with this week, and the late-night show totally took advantage during its Dec. 2 cold open. What was intended to be a festive holiday party at the White House — complete with Melania's "dead branches and mysterious shadows" for decoration — turned out to be a hellish ordeal for the commander in chief. SNL's Trump Christmas party was actually more of a nightmare... for the president, anyway.

The skit opened with Trump (Alec Baldwin) and Kellyanne Conway (Kate McKinnon), who enjoyed so many spirits at the holiday shindig that she actually told the truth. While in the Oval Office, Trump revealed to Conway that he had the winter blues because of the whole Michael Flynn ordeal and he needed a little break from the activities. Before returning to the party, Conway received instructions to pack the president's suitcase with his passport, a fake mustache, and some chicken — just in case.

That's when it happened. The ghost of Christmas pasts came to give Trump a rude awakening more than any lump of coal could. Flynn, who arrived in shackles, warned the president that he'd be receiving a visit from people who came back to haunt him, and it was definitely something viewers couldn't miss. Merry Christmas, indeed.

Billy Bush was the first to make an appearance. Though he is finally set to return to TV after the infamous tape ordeal, he couldn't help but give the president a few words of wisdom first. "Remember Donald, these things catch up with all of us," he said.

Of course, what would a Trump SNL sketch be without our favorite Russian leader? Vladimir Putin (Beck Bennett) made a (shirtless) appearance, as per usual, but couldn't quite answer the president's main question: "Do you think I'm cool?" He did impart a few words of wisdom, though: "Chill out, broski."

However, Trump's third and final visitor stole the show. Donned in grim reaper attire, Steve Bannon made another return to the Oval Office during Trump's ghosts of Christmas past visits. The commander in chief breathed a sigh of relief. Thank goodness for Bannon.

That's right: Clinton was really the one behind the black cloak. The joke was on you, Donny. "You, Donald, have given me the greatest Christmas gift of all," Clinton (McKinnon) said. "Sexual gratification in the form of your slow demise." But that wasn't her only message for the fella who stole her spot in the White House. She continued, "You have no idea how long I wanted to say this: 'Lock him up!'"

To say this Christmas party was one for the books is certainly an understatement. It was definitely not much of a celebration, at least for the president (the viewers, on the other hand, totally couldn't pass up his holiday hell). If you thought your annual family get-together would be too much to endure, at least you don't have Michael Flynn and his guilty plea to worry about, unlike #45.

On Friday, Dec. 1, Trump's former national security adviser Michael Flynn pleaded guilty to lying to the FBI... so it was definitely a turn of events that could put a damper on the holiday season for the prez. This was the latest move in Robert Mueller's investigation, which is to examine possible collaboration between the Trump campaign and Russia to influence the 2016 presidential election. Though the president IRL insisted that there was no collusion, our SNL president (Baldwin) desperately wants the "cool" approval of his Russian BFF.

More like this
Who Did Emily Poison? 'The Handmaid's Tale' Season 2 Is Off To An Intense Start
By Ani Bundel
In 'Riverdale' Season 5, Toni Topaz Is The Black Superwoman Without A Cape
By Erika Hardison
Here's How To Enter Panera's Bread Bowl Bike Sweepstakes For A Sweet Ride
By Daffany Chan
Stay up to date