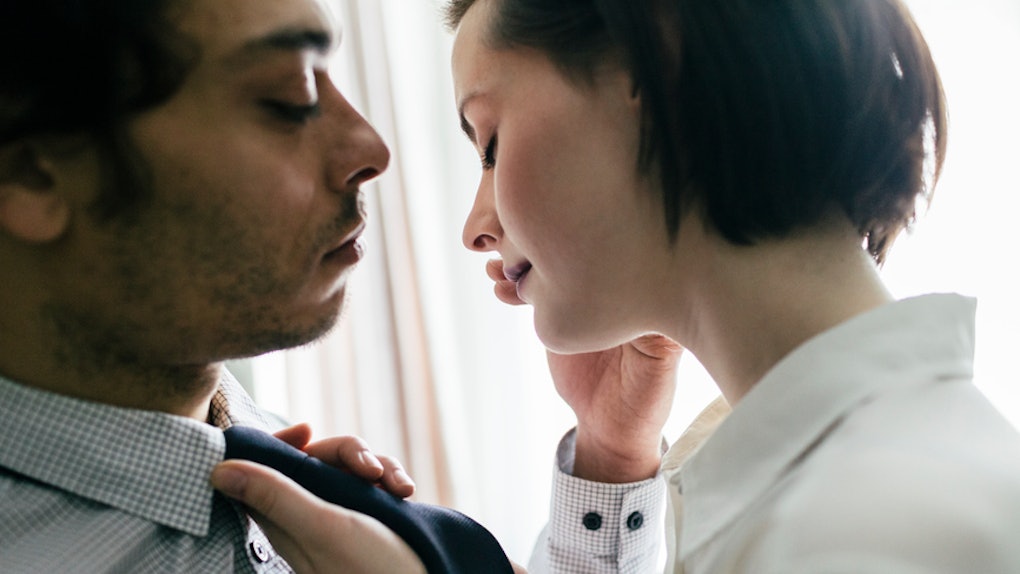 Should You Hook Up With An Ex? Here's What You Need To Know Before Doing It

Fighting the strong temptation to hook up with an ex if and when the opportunity presents itself can prove to be quite the challenge. Maybe it's been a while and the thought of getting down and dirty with someone who knows what you're into sounds too good to pass up. Or maybe, deep down, you've still been clinging to the possibility of reuniting and think a few casual hookups could be just the thing to coax them back into your life.

The laundry list of of reasons people use to justify having sex with an ex are plentiful, but before you jump back into the sheets with someone you have a history with, you might want to think twice. Particularly if things are still fresh, hooking up with an ex has the potential to reignite some serious feels. Now, depending on how you both are feeling, this might not actually be a bad thing — but considering most people fail to have a pre-sex convo with their ex about their expectations, it's easy for one of you to get things twisted.

Before having sex with an ex, there are some things you should consider that will decrease the likelihood of things getting complicated.

First things first, it's important to be honest with yourself about what you're hoping to gain out of hooking up with an ex lover.

If you're going through a rough patch and looking for something familiar to cling to, Krissy Dolor, Director of Client Success at eFlirt, believes getting pulled back in by an ex could be taking the easy way out. "Most times, we crave going back to an ex because it's comfortable, and because we're scared of the unknown. But just because you don't know what (or who) else is out there, doesn't mean it won't be even better than what you do know (your ex)," explains Dolor.

So instead of dialing up your ex for a late-night booty call, another option could be perusing Tinder to see what else is out there.

2. Make Sure You're Actually Over Them

The biggest danger when it comes to getting intimate with an ex comes when one (or both) of you have yet to fully move on. If you're pondering hitting send on that text offering to meet up for drinks, avoid putting yourself through more pain down the line by making sure you aren't trying to weasel your way back into their heart.

So how do you know you're truly over them? "The best question you can ask yourself to test your recovery from the breakup is, 'When was the last time you thought about your ex?' As you get over an ex, it will be longer and longer between thinking of that person," says relationship and etiquette expert April Masini.

So basically, if you ran into them in the club and can't really remember the last time you thought about them, then that could very well be a green light to pass go, get laid, and collect 200 dollars.

On the other hand, if they still cross your mind fairly regularly or the thought of seeing them with someone else makes you want to explode, then you might want to pass on ex-sex for the time being.

At this point, if hooking up with an ex is still seeming like something you want to do, then NBD. But if by some chance you do end up wondering what it would be like to get back together, try to spend some time thinking about why you decided to call it quits in the first place. For most people, this will be sobering enough to help you leave the past in the past.

Hooking up with an ex is hardly something to be ashamed of. As long as you're not fostering false hope in them (or yourself), then there's no reason you can't have a lil' rendezvous from time to time.