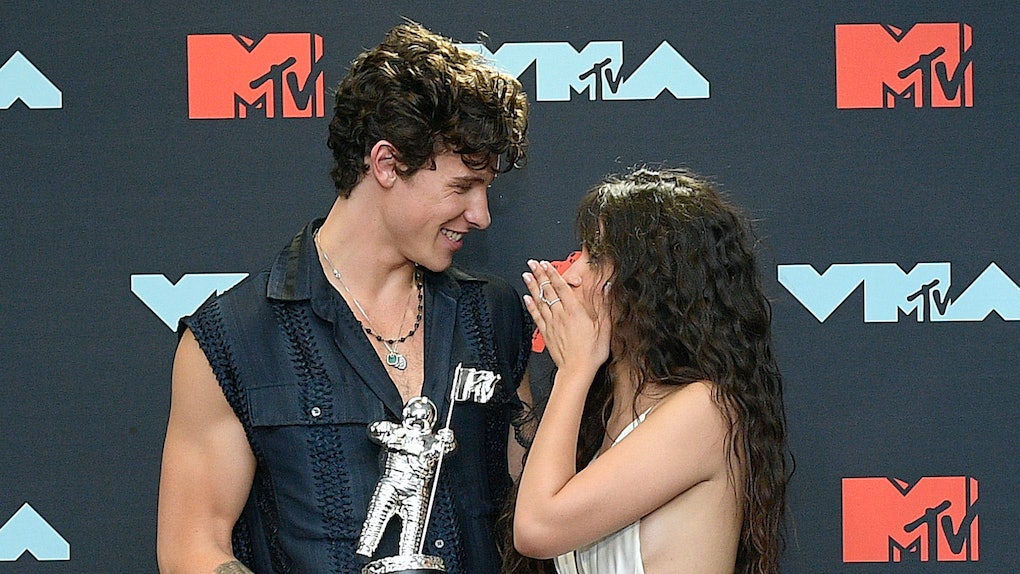 Shawn Mendes and Camila Cabello have been setting the internet ablaze for months now. Between delivering steamy performances of their duet "Señorita" and getting caught in some serious PDA while hanging out with each other, pretty much everyone is sure the two hitmakers must be dating... but neither Mendes nor Cabello has confirmed the rumored relationship yet. Fans have been waiting for one of the singers to finally open up, and Shawn Mendes' recent relationship comment seems to be the confirmation that Shawmila stans have been praying for.

On Friday, Aug. 30, Shawn Mendes sat down to chat with his fans after performing a concert at the Mohegan Sun Arena in Uncasville, Connecticut. During the Q&A session, one fan asked the question that has been on everyone's mind for the last several months. The concertgoer pointed out how Mendes once said he had never been in love before, and asked if that has changed recently. Although Mendes did not answer the question, his response actually did seem to confirm he's in a relationship with another person.

Mendes said, "I wanna talk to you guys about this stuff, but it's not just me in the relationship. There's another person involved." Of course, everyone assumed that other person must be Camila Cabello. Elite Daily reached out to both Mendes' and Cabello's reps for comment on Mendes' relationship response, but has not heard back by the time of publication.

The comment is so notable among fans of the rumored couple because it marks the first time that either Shawn Mendes or Camila Cabello have confirmed that one of them is currently in a relationship. Despite photos of Mendes and Cabello packing on the PDA at various locations over the past few months, both singers have been playing it extremely coy when it comes to actually confirming they are dating.

The two first raised eyebrows when their sultry duet "Señorita" dropped on June 21, 2019, which was released alongside a super-steamy music video in which the two singers showed off some undeniable chemistry. After that, it seemed like Mendes and Cabello were inseparable, and they would get caught making out in public and posting romantic things about one another.

The Shawmila rumors reached an all-time high at the end of August when the duo lit up the stage at the MTV VMAs with an incredibly sensual performance of "Señorita" that teasingly ended with an almost-kiss.

The rumored couple also cuddled up in the audience at the VMAs, fueling romance rumors even more. But despite all of the flirty, lusty energy Mendes and Cabello have been giving off for months now, neither singer has officially confirmed that they are anything more than just friends.

That is why Shawn Mendes' new comments about being in a relationship are such a big deal. Although he did not mention Cabello, Mendes did seem to confirm he is in a relationship with someone, which is the most fans have gotten from either of them in months. Here's hoping that this is a sign Shawmila is close to finally publicly confirming they are dating!

More like this
Sophie Turner & Joe Jonas' Pics From Their Vegas Wedding Are Such A Vibe
By Cianna Garrison
Are Jennifer Lopez & Ben Affleck Getting Back Together? A Reported Reunion Has Fans Buzzing
By Cianna Garrison
Kourtney Kardashian & Travis Barker's Photo At Machine Gun Kelly's Birthday Is Double Date Goals
By Cianna Garrison
Stay up to date