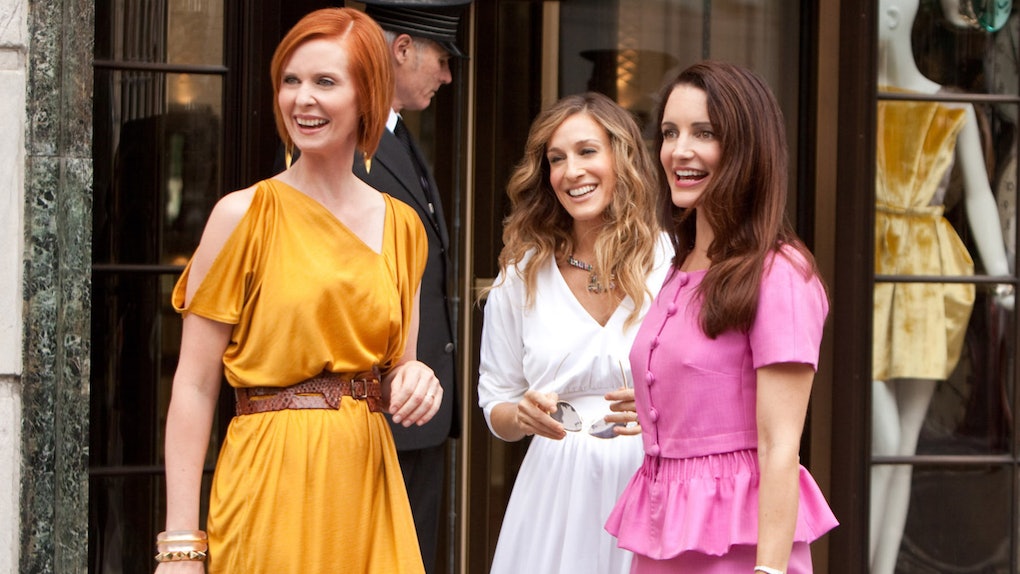 Everyone's favorite New York City gal pals are finally making their big return... with one big exception. News of a potential Sex and the City reboot had been bubbling on the internet for quite some time, but Sarah Jessica Parker finally confirmed it's really happening on Sunday, Jan. 10, when she posted a teaser trailer for HBO Max's Sex and the City reboot, titled And Just Like That. And *just like that,* the fandom has been given new life.

There has been buzz about a new iteration of Sex and the City for years. Back in 2017, Parker teased that ideas for a third film were being tossed around. While that never came to fruition, reports of a sequel series at HBO Max cropped up at the end of 2020, which Parker and her co-stars have now confirmed. But the new series won't include all four of the original leading ladies. Kim Cattrall has long maintained she's done playing Samantha, and Parker confirmed in the comments section of her Instagram of the reboot teaser that Samantha won't be in And Just Like That.

So, want to know what Carrie, Charlotte, and Miranda are up to these days... and how they will address Samantha's glaring absence? Here's everything we know about the upcoming series so far:

So far, no other cast members have been officially announced by HBO Max. However, in an April 15 interview with Page Six, John Corbett (who played Carrie's love interest Aidan on the series), revealed he'll be in the reboot. “I’m going to do the show,” he told the outlet. “I think I might be in quite a few [episodes].”

HBO Max has yet to announce a premiere date for the Sex and the City follow-up series, but it is scheduled to begin filming sometime in late spring. The show will consist of 10 half-hour episodes, chronicling Carrie, Charlotte, and Miranda's newfound highs and lows now that they're in their 50s instead of their 30s. Fans can hopefully expect it to premiere by the end of 2021 at the earliest.

The sequel series will pick up over a decade after fans last saw the characters in 2010's Sex and the City 2 and nearly two decades after the HBO series ended in 2004. Sarah Jessica Parker revealed the new show will be extremely timely, confirming to Vanity Fair that the coronavirus pandemic will be addressed and depicted in Carrie, Charlotte, and Miranda's lives. "[COVID-19 will] obviously be part of the storyline, because that’s the city [these characters] live in," Parker said. "And how has that changed relationships once friends disappear? I have great faith that the writers are going to examine it all.”

To confirm the news of the sequel series, Parker posted a short clip. It doesn't reveal much, but in between shots of New York City scenery, the video shows someone (presumably Carrie) typing out the show's title on her laptop, followed by "The story continues..."

HBO Max and the And Just Like That cast will likely share tons of exciting news about the sequel series in the coming months, especially after the show enters production in the spring. Look for the upcoming show to hit the streaming service in late 2021 or sometime in 2022.

This article was originally published on Jan. 11, 2021