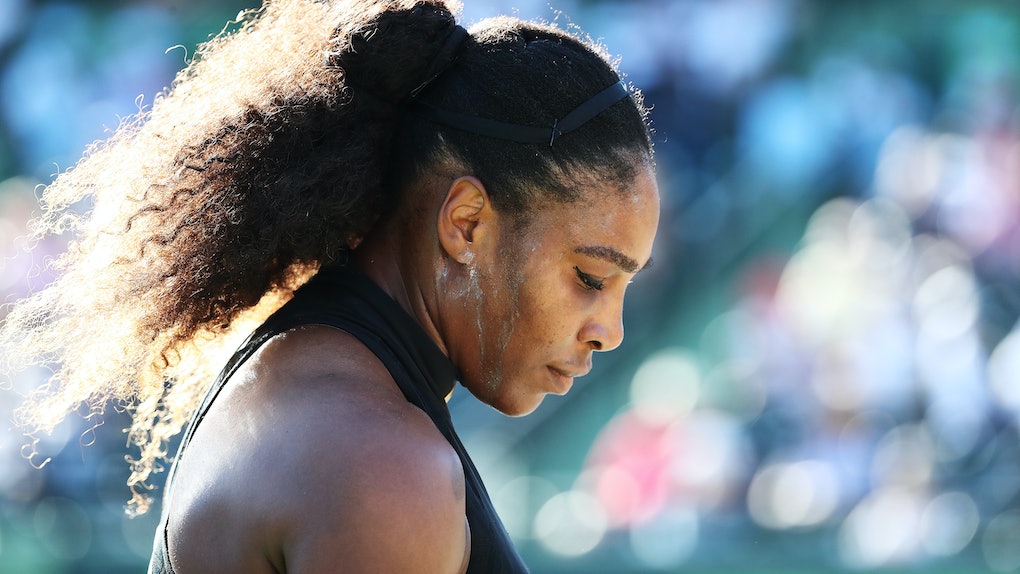 If you thought Serena Williams couldn't get any cooler, prepare yourself, because she just did. The tennis superstar has been in the news lately not just for her game, but this time, for her experiences with the trials and tribulations of motherhood. Not only was the story of her new baby's birth intense and inspiring, Serena Williams' advice about anxiety and being your own advocate, even in situations where it feels nearly impossible to do so, is an important message that everyone should take time to hear.

In a recent interview with Huffington Post, Williams admitted that, while she loves being a mom, she experiences anxiety about motherhood all the time. I mean, given the complications that happened shortly after the birth of her first child, can you really blame her? In a Vogue profile of the athlete back in January, Williams described the difficulties, both physical and emotional, that ensued after she gave birth to her daughter, Alexis Olympia. After her baby's heart rate began to plummet following Williams' contractions, she had to have an emergency C-section. While the procedure turned out to be successful in delivering her daughter, the complications didn't stop there. Williams spent six days after giving birth, getting multiple surgeries in an effort to fight a pulmonary embolism (which is when an artery in the lungs has a blood clot). Because blood clots were something Williams said she'd experienced in the past, she knew what was going on, and spoke up immediately once she sensed something was wrong.

And it was because Williams spoke up that she was able to receive the medical attention that, indeed, saved her life.

When she began to experience shortness of breath after the surgery, she alerted a nurse, who initially thought she was simply feeling out of it because of her pain medication — but Williams knew better. The Vogue profile explained,

Serena insisted, and soon enough a doctor was performing an ultrasound of her legs. “I was like, a Doppler? I told you, I need a CT scan and a heparin drip,” she remembers telling the team. The ultrasound revealed nothing, so they sent her for the CT, and sure enough, several small blood clots had settled in her lungs. Minutes later she was on the drip. “I was like, listen to Dr. Williams!”

In her more recent interview with Huffington Post, Williams said it is her ability to remain calm, and make decisions in the face of stress, that have served her well in these types of difficult situations.

She credits this ability to the high-pressure sport of tennis, which she says has taught her how to make quick, difficult, high-stakes decisions both on and off the court.

I think that has trained my mind to make decisions quickly and make the best decision I can in the moment with all the pressure. You have to remain calm.

The 36-year-old tennis star added that, in situations like the one she experienced during childbirth, it is so, so important to speak out, because at the end of the day, you know your body and your limits better than anyone. While it can be frightening to assert yourself against professionals or figures of authority, sometimes it really is a life-or-death situation.

And it is true, and worth nothing, that sometimes, despite speaking out, people still don't listen. As Williams noted in her Huffington Post interview, she was lucky in this regard:

Speak out. Sometimes you’re not being heard, but speak out again ― speak out louder ― and continue to try.

Just because we aren’t doctors doesn’t mean we don’t know our bodies. For me, I told the doctor I knew something was wrong. They did listen to me, and I was fortunate enough to have a great doctor, but not everyone has that.

As counselor and relationship expert, David Bennett, points out, speaking up for yourself is an important skill to develop in any context.

According to Bennett, this includes friendships, in the workplace, or really in any setting, because people will never be able to know, or respect, what it is you need or want in life, unless you assertively and clearly express those concerns.

"And sometimes, other people can be dismissive of your concerns, and in these cases, it’s even more important to assert yourself," Bennett tells Elite Daily, "especially if your physical or emotional health are involved."

No one's saying it's easy, but when the going does get tough, Bennett recommends taking deep breaths, and reminding yourself you're not alone in this struggle. It can be frustrating, yes, but learning how to speak up for yourself is an invaluable skill to have in life. Thank you, Serena, for reminding us of that.