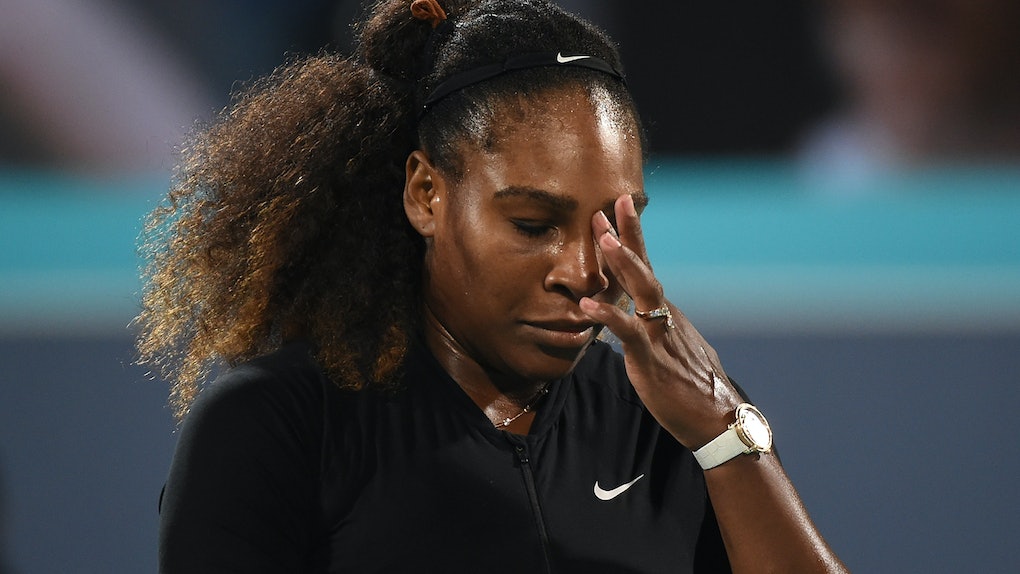 Mothers have always taken pride in sharing their birth stories, but there are some that just aren’t as happy to share. Some women experienced horror stories that made them feel scared, violated, and in danger. Serena Williams had a major health scare after giving birth and can attest to that. Though she had a seemingly easy pregnancy, when her contractions began, the birth of her daughter, Olympia, became more difficult than the tennis star could have ever imagined.

In a new profile in Vogue, released online on Jan. 10, Williams opened up about her post-birth experience, and it's kind of terrifying. According to the profile, it started when doctors had to perform an emergency Caesarean section when Olympia’s heart rate plummeted after Williams' contractions began. Then, while Williams was in the hospital healing from her C-section, “everything went bad." The Grand Slam winner felt short of breath and assumed she was suffering from a pulmonary embolism, or a blocked artery in the lung often caused by a blood clot. Though she reportedly told the doctors and nurses what she thought was happening and insisted her doctor give her the necessary treatments, the nurse she talked to supposedly thought her pain medicine "might be making her confused." Instead, doctors reportedly ignored her requests and gave her an ultrasound, which revealed nothing.

“I was like, a Doppler? I told you, I need a CT scan and a heparin drip,” Williams recalled to the publication. She was finally given the scan, which — like Williams said — revealed several small blood clots in her lungs. “I was like, listen to Dr. Williams!” she said.

Thankfully, Williams made it through OK. But her story is an example of what it means to trust what your body is telling you and to take control of those signs. Her ability to speak up for herself when she knew something was wrong is so admirable, but I can’t help but wonder what would have happened if Williams’ didn’t have the instincts that she had. Or what if her doctors hadn’t listened to her? Or neglected her for another day? Or week?

Many women expressed just how common issues like these are when it comes to Black women.

And how terrifying it is that even a famous, wealthy woman like Williams was affected.

Black women are three to four times more likely to die of childbirth or pregnancy-related complications than white women, according to the Centers for Disease Control (CDC). While there's no one reason that can be identified as causing the discrepancy, experts point to everything from chronic illnesses to socioeconomic status to access to quality care — including implicit biases and the differences in care provided to Black and white women — as factors, according to CNN. At least 46 percent of maternal deaths among Black women could be prevented, according to the American College of Obstetrics and Gynecology, in comparison to 33 percent of maternal deaths among white women.

Too often when women want to make their own choices during their birthing process, their decisions are overridden or ignored. Thankfully, in this case, Williams ended up saving herself from something that could have been potentially dangerous to her health.

Though Williams' Vogue profile is getting a lot of attention for that adorable cover of her with her baby daughter, the story she tells inside the cover is important too. Perhaps her story will help highlight some of these issues that continually affect and threaten the health of Black women. But, until the system is reformed, one thing is becoming increasingly clear: pay attention to your body, and you might just save your own life. Congratulations to Williams on her beautiful baby girl, and her wisdom in standing up for herself.