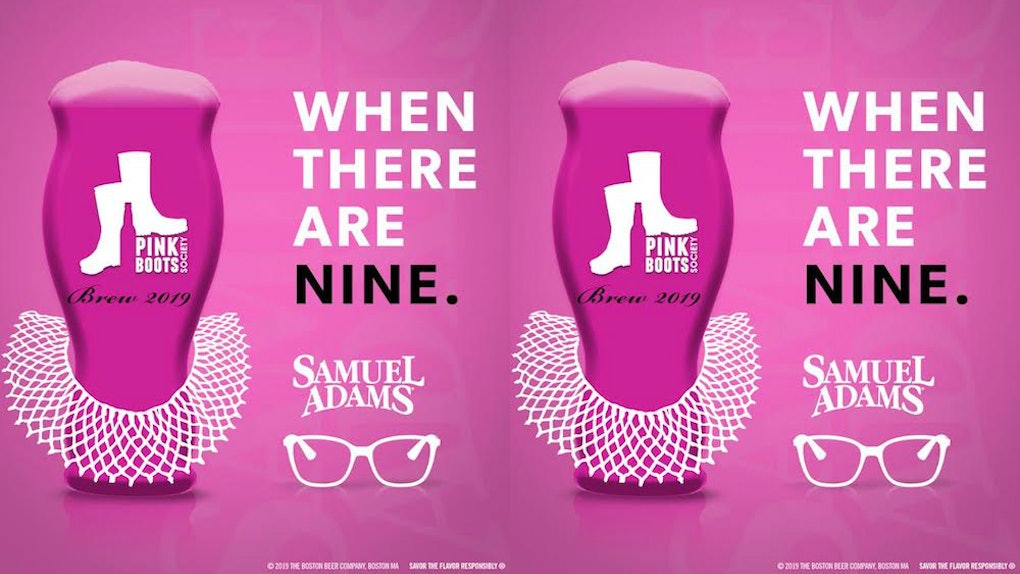 Like most liberal women living in America, I passionately idolize Supreme Court Justice Ruth Bader Ginsburg. In case you aren't familiar with the feminist icon dubbed "The Notorious RBG," she's the second woman to be appointed to the Supreme Court as one of the nation's most iconic left wing Associate Justices. For the last several years, she's fought endlessly for a wide range of women's issues, from equal pay to reproductive rights. Bottom line: she's an all-around badass human being, so as you could probably imagine, I am beyond excited to try Sam Adams' Ruth Bader Ginsburg-inspired beer. Plus, it has the most fitting name ever.

Boston-based brewing company Sam Adams has just created the beer of my wildest dreams — a sip that's 100 percent dedicated to my girl, Supreme Court Justice Ruth Bader Ginsburg. The brew itself is categorized as a Belgian Brut IPA, and it's called "When There Are Nine," according to CNBC. If that phrase doesn't ring a bell instantly, let me jog your memory.

"When There Are Nine" takes inspiration from the 86-year-old legend, per CNBC, when she proudly stated: “There will be enough women on the Supreme Court when there are nine," in response to a question about what would constitute enough women on the Supreme Court. To be completely honest, she wasn't wrong, and now that there's a beer representative of that quintessential quote, you'd best believe I'll be sipping it all day, everyday.

When There Are Nine features a unique mixture of hops, blended by the Pink Boots Society, a non-profit that supports women in the beer brewing profession, as well as Yakima Chief, an international hops supplier, according to Today.com. They teamed up in honor of International Women’s Day, which was celebrated earlier this month on March 8. And if you're dying to sip it to your heart's content, you'll be able to try it super soon — that is — if you're in or around the Boston area.

That's right — Sam Adams' latest and greatest ~feminist creation~ will officially be unveiled at a celebration hosted by the Pink Boots Society in Boston, Massachusetts on March 29, according to an Eventbrite page. Tickets to get in will cost you 20 bucks, but trust me, it's worth every penny — a portion of the proceeds from will be donated to the non-profit afterwards. Elite Daily reached out to Sam Adams inquiring about the beer's availability proceeding the event, but did not hear back in time of publication.

Since every great at-home happy hour is accompanied by a batch of hot wings, make sure to peruse Supremely Hot Sauces, which you can buy on alwaysfits.com. These feminist-inspired condiments were released on Friday, March 15 in honor RBG's 86th birthday, and they come in three distinct flavors dedicated to Supreme Court Justice women. There's the Roastin' RBG, a red habanero hot sauce, the Scathing Sotomayor, a green habanero hot sauce, and Kickin' Kagan, a jalapeño-based hot sauce. Each five-ounce bottle costs $10, and you can get a pack of all three for $27.

There's a lot of excitement surrounding Sam Adams' new RBG beer, and even though I'm not big on IPAs, you can bet your bottom dollar I'll be knocking back one (or three) in honor of madame Notorious. Cheers to forever fighting for women's rights — and for rebellious women like Ruth Bader Ginsburg.