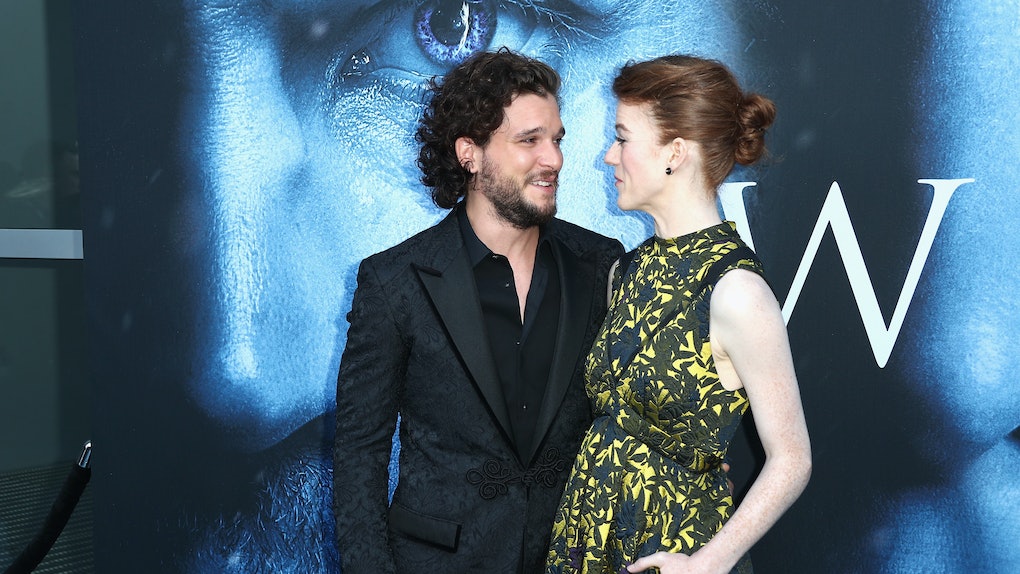 Unless you're living under a Game of Thrones-free rock (like I was until about a month ago), chances are that you know that Jon Snow and Ygritte's on-screen romance made its way off-screen. Yup, Kit Harington and Rose Leslie got married in June 2018, after reportedly dating for three years, and their relationship IRL is as adorable as their fictional one. In fact, Rose Leslie's response to Kit Harington's April Fool's prank and their body language at the premiere of the eighth and final season of GoT are just a couple of ways that they're, like, #CoupleGoals.

On an episode of the Late Night with Seth Meyers, Harington revealed how his April Fool's prank this year backfired, and it's so great. "I'm aware this is the most first-world April Fools' — before I tell this story, I didn't know what to do," he said. Apparently, Leslie is very particular about her almond milk and will only drink it from one specific company. "So, I just wrote an article about how this company that makes her favorite almond milk was going under because of Brexit," he continued. "Now this backfired, ‘cause she immediately rang my PA and got her to bulk-order this almond milk with my credit card, so I ended up spending 150 quid on almond milk." That's $195.56, people!

According to one of Leslie's appearances on the Late Night with Seth Meyers, this wasn't the first time Harington pranked her, either. In 2017, he pulled a much crueler prank, which didn't necessarily backfire. Leslie revealed that Harington put a prop version of his severed, bloody head in their refrigerator, on the previous April Fool's Day. She explained that she had been in New York filming her newest show and hadn't seen her husband in about six months. Upon getting home, she quickly discovered her hubby's bloody head in their fridge. Talk about a welcoming committee!

"So, I basically had ordered a Brita filter the day before, and I was very excited about its arrival," she started. "And I'd been on the Internet kind of like looking at the different models and couldn't wait for filtered water. And so kind of like went downstairs to the fridge, and I was getting ready to kind of like have my glass of water for the first one of the day, and I was chatting to him over there, and I don't remember him kind of holding up the phone because he took video of the whole thing," she continued. "And I thought that he was kind of, like, texting but still, you know, speaking to me. And then as I then turn my attention back to the fridge, I see this terrifying head staring back at me and I don't necessarily recognize that it's him. But I just know that somebody's just bloodied in like in my fridge, hairy and, oh, God. Horror."

While the whole almond-milk prank definitely wasn't as cruel as the head in the fridge prank, Harington said he had to resort to a less cruel prank because he didn't have as many props at his disposal. So, it's very possible that he would've done something just as scary, if he had the means to. Regardless, at least now Harington and Leslie have almond milk for days. Silver linings!