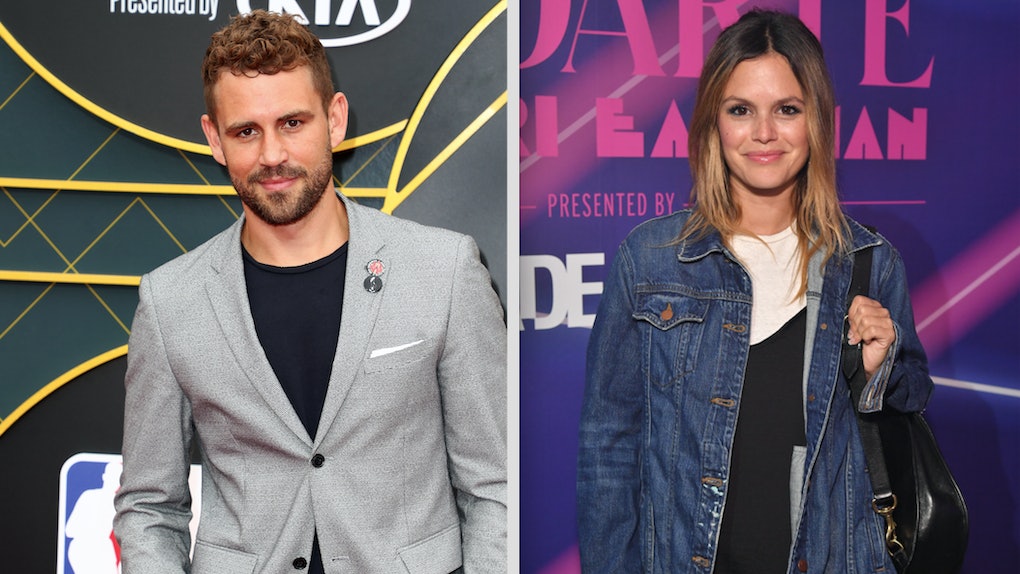 OK, real talk. If a celeb doesn’t deny a dating rumor, is there something beneath the surface? At least that’s what fans shipping a certain pair of television stars are hoping. Because Rachel Bilson’s quote about dating Nick Viall just fueled. The. Fire. Anyone who follows the celebs on Instagram has no doubt noticed their flirty exchanges over the last couple of months, but when Bilson was asked outright about her budding reported relationship with the Bachelor alum, she straight-up blushed, according to Us Weekly. And while her response was a little vague, it definitely left some room for hope that they could be an item.

Here’s how it went down. While walking the red carpet at the Freeze HD Gala on Sept. 28, she was asked to comment on whether she was dating Viall. Now, if you ask me, it would have been easy enough to shut that rumor down if she wanted to. But she didn’t — instead, she playfully responded, “I don’t want to talk about it,” and her BFF Jaimie King added, “That’s private; we’ll keep that private, for now.” Keep what private? Clearly, there's a thing to keep private. Am I right? (Elite Daily reached out to reps of both Viall and Bilson's teams for comment, but did not hear back in time for publication.)

In case you missed it, Bilson and Viall have reportedly been an item for some time now, ever since she made a guest appearance on his Viall Files podcast on July 24. The day before the episode aired, Viall posted a picture of him and Bilson looking pretty cozy on a couch and captioned it, "Will we choose to forgo our individual rooms..." at which point, fans totally lost it. Bilson, for her part, added, "He slid into her.....dms #sheaccepted” — a flirty comment referring to the fact that Viall actually invited her via direct message. The sexual innuendos were flowing, fam.

Later, Viall told Us Weekly that he had always had a crush on Bilson, something that he admitted to her on the podcast. Oh, and he also referred to Bilson as “his dream girl.” So, there’s that.

“She was really cool,” he told Us Weekly. “She’s a lot of fun, has a great sense of humor and she knows how to give me a hard time, and I really appreciate that.”

At that point, Viall only referred to Bilson as a friend (womp-womp). But all hope is not lost because shortly after Bilson appeared on Viall’s podcast, the two began engaging in flirty AF social media exchanges that suggested the two may be a little more than friends. Seriously, how did we predict blooming celeb romances before Instagram? All the evidence you need that the sparks are flying between Bilson and Viall lies in the comments sections of their respective IG accounts. I present Exhibit A: On Sept. 29, Bilson shared a pic with her squad at the Freeze HD event, and Viall commented, "We are both at fundraisers tonight ... cute." Additionally, on Sept. 14, Bilson posted a photo of herself against a desert sunset backdrop, and Viall commented, "Nice mountains." (I'm blushing.) And on Sept. 22, Viall shared a shirtless photo of himself with the caption, "Doesn’t everyone watch football like this?" and Bilson fell right into the thirst-trap, writing, "Touchdown." (Now I'm sweating.)

That’s just a small sampling of the instances in which these two have been a walking heart-eyes emoji, for the record.

BTW, Bilson isn’t the only one who has been put on the spot as of late. On Sept. 17, Elite Daily spoke to Viall at an NYC event for the dating app Plenty of Fish and asked him if he was dating Bilson. He responded, “I’m not really defining my relationships right now but she’s definitely a friend and she’s great and I always enjoy spending time with Rachel.” He also added that “people seem to want answers before I even know I have answers,” which could hint at the possibility that the two are an item, but just haven’t put a label on their relationship yet or made things official.

OK, so neither one of them have exactly confirmed that they’re dating. But here’s the thing — they also haven’t denied it, either. If you listened to them talk on Viall’s podcast or scrolled through their flirtatious IG comments, you might notice that they have some serious chemistry. So, let's just cling to that, shall we? It seems like the pair isn't in a hurry to define or publicly reveal exactly what's going on between them, but that doesn't mean that something isn't going on. In the meantime, I, for one, will be patiently awaiting more playful IG exchanges. A girl can dream, right?