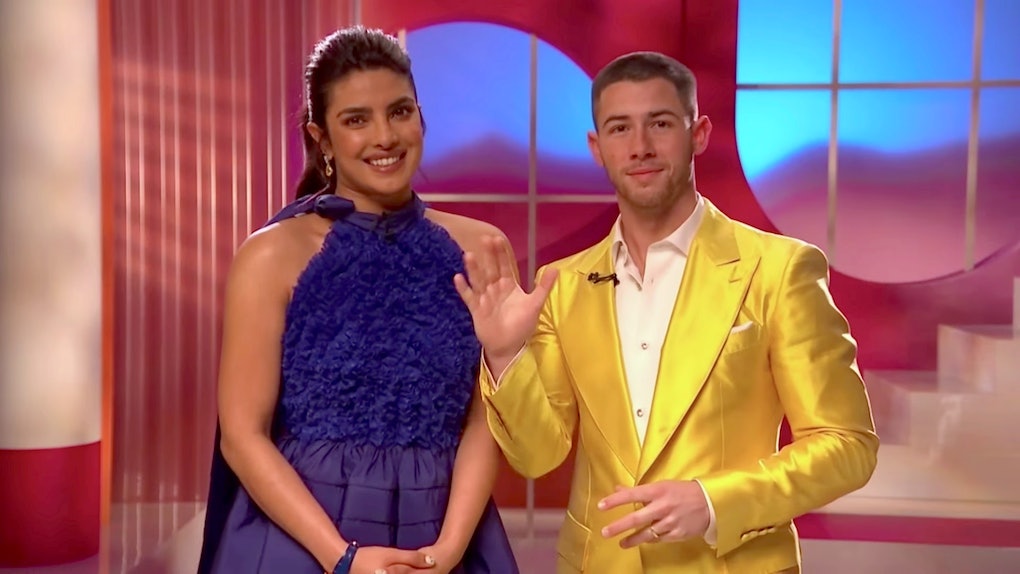 The 2021 Oscar nominations were only just announced, but of course there is already some drama surrounding the award show. Power couple Priyanka Chopra and Nick Jonas announced this year's nominations early in the morning on Monday, March 15, but the choice to have them present didn't sit well with some online haters. After a reporter Tweeted that the duo was unqualified for the event, Priyanka Chopra's response to the shade about her announcing the Oscar noms was a reminder of just how prolific an actor she is.

Ahead of the 2021 Academy Awards taking place on April 25, Chopra and Jonas were selected to reveal all the nominations in the major categories via livestream. The choice may have been a bit confusing for some people, since the only movie Jonas has appeared in since 2019 was the recently released thriller Chaos Walking, which hasn't exactly received awards season buzz and wasn't released within this year's eligibility period anyway. Chopra, however, did star in and produce the 2021 drama The White Tiger, which did, in fact, earn a nod for this year's Oscars.

While Chopra and Jonas' chemistry made for a fun announcement livestream for most viewers, entertainment reporter Peter Ford tweeted he didn't think they should have been the presenters. He wrote: "No disrespect to these two but I'm not sure their contribution to the movies qualifies them to be announcing Oscar nominees."

Chopra was quick to remind Ford exactly what her "contribution to the movies" has been over the years, linking a video of her extensive IMDb profile in response to his tweet.

While Chopra herself might not be nominated this year, her film The White Tiger is up for the Best Adapted Screenplay Oscar, so she'll have a project to root for on Oscars night. For his part, Jonas is more focused on his music career than acting right now, having just released his fourth solo album, Spaceman, on March 12. The album includes tons of romantic odes to Chopra, and the deluxe edition even has a Jonas Brothers reunion, with Joe and Kevin joining Nick on the track "Selfish."

With all of their impressive movie and music projects, Chopra and Jonas are clearly not letting any attempt at shade get them down in 2021.