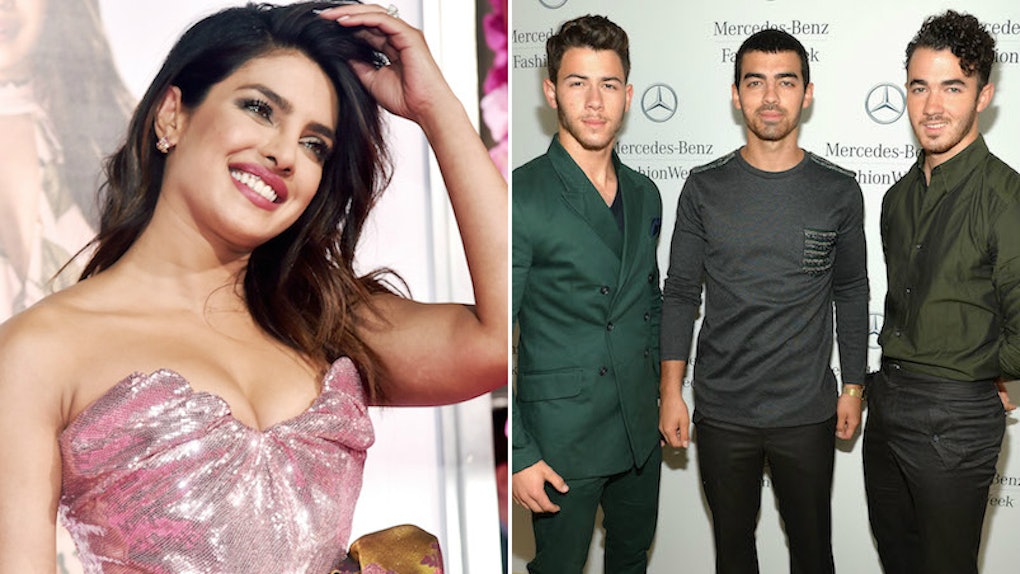 If there's one person who gets the Jonas Brothers, it's Priyanka Chopra. The new Mrs. Nick Jonas is celebrating the revival of the family band the same way many other fans are — by swooning over their lustrous locks and gobbling up their handsome jawlines. Priyanka Chopra's reaction to the Jonas brother's new single is so funny, sweet, and so damn relatable.

After plenty of murmurings about a Jonas Brothers reunion, the gang has finally confirmed it's coming — and sooner than you think.

At midnight on Friday, March 1, Nick, Joe, and Kevin are dropping their first single since the group disbanded in 2013. The song is called "Sucker" (which I love, though I don't know why yet) which has a great piece of cover art to go with it. In the picture shared by Chopra, the three boys are walking away from what looks like a fancy-ass European mansion covered in balloons. Nick, her hubby, leads the pack followed by Joe and Kevin who are rocking loud, colorful, and patterned outfits, respectively. The visual vibe is selling something super playful, which tipped fans off that "Sucker" is going to be more of an upbeat diddy than some sort of emotional ballad.

Chopra captioned the photo: "And yes they’re back…and may I say… hotter than ever. So proud of the family #Sucker #JonasBrothers #MidnightET"

In one hour, Chopra's post racked up nearly 800,000 likes, but that's nothing when you combine it with Kevin, Nick, and Joe's likes plus all the attention they're getting on their "We're back!" announcement with James Corden on Carpool Karaoke!

Oh, yeah. Did I mention that part?

Along with launching their new single, the Jonas brothers are throwing a week-long takeover of Corden's show from Monday, March 4, to Thursday, March 7, into the mix. That Monday night, they'll be joining Corden on his couch to talk over their reunion, which will kick off the rest of the week's festivities. Variety reports their Late Late Show takeover will include fan-favorite segments like “Spill Your Guts or Fill Your Guts,” plus an obvious group Carpool Karaoke trip.

I don't know what Corden did to get in so good with these guys, but everyone is thriving in this teaser video. One-by-one Corden picks up each Jonas brother and finally asks the question we've all been wondering for the past six years, "Is what I think is happening — is it happening?"

They all answer in unison, "Yup. We're back!"

As a bonus, the Jonas brothers included a small teaser of "Sucker" before its official launch. I was right, it's a rock-party beat.

Chopra's boo explains to Corden that it's nice to finally tell someone he and his brothers are getting back together. According to him, they've been keeping it a secret for nearly eight months. If you're doing the math, that means Nick was planning the reunion at the same time he was getting engaged to Chopra and planning their massive wedding festivities.

Obviously, Nick is in his prime. At 26, he has the energy and brain power to jump feet first into a new marriage and new music, making this one exciting time to be the youngest Jonas. Bless him.