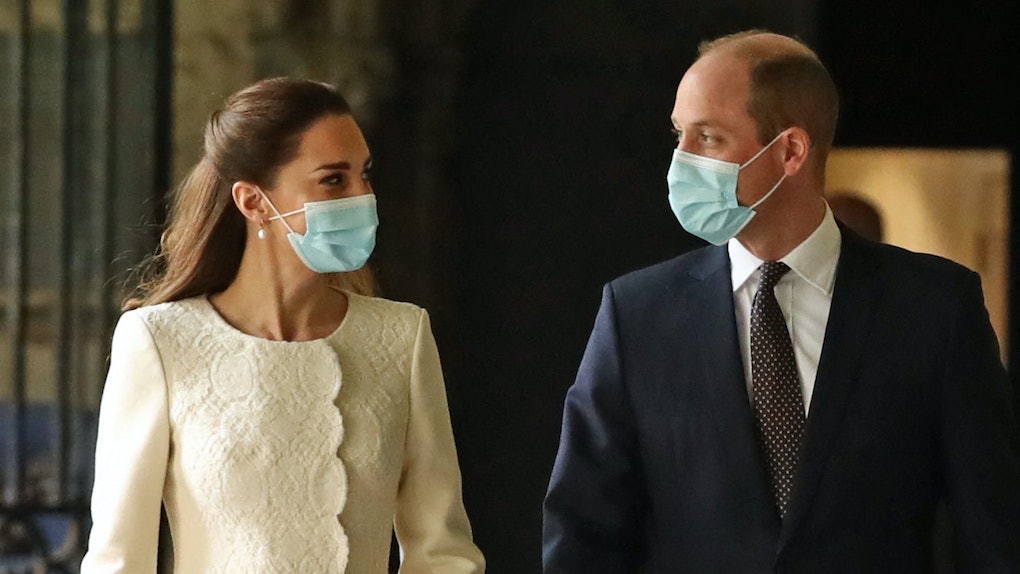 It's been nearly a decade since the Prince William and Kate Middleton tied the knot at Westminster Abbey in London, and the royal couple recently decided to revisit the venue — but probably not for the reason you'd expect. Earlier in the month, Westminster Abbey was turned into a COVID-19 vaccination center, so the Cambridges paid a visit on March 23 to tour the new clinic and honor the staff members and volunteers helping to vaccinate the public against the virus. While revisiting their wedding venue, Will and Kate's body language showed unity amid controversy following Prince Harry and Meghan Markle's interview with Oprah Winfrey.

A source for Us Weekly reportedly claimed Kate has been "her husband's pillar of strength" throughout backlash aimed at the royal family. "They lean on each other for support during difficult times and will talk through their problems," the source reportedly claimed on March 24, adding that the two have a "strong, solid marriage." According to Traci Brown, body language expert and author of Persuasion Point: Body Language and Speech for Influence, the Cambridge's body language during their Westminster Abbey visit suggested the two are as "tight as usual," despite the revelations brought about by the bombshell Oprah interview.

While walking through Westminster Abbey together, Will and Kate exchanged a look that seemed to convey intimacy and familiarity. "They're in step, which is what we see from great couples," Brown tells Elite Daily. "They're matching each other's body language almost perfectly. And they're looking at each other eye to eye in close range, which is really hard to do if you're not intimate."

At another point, Will lightly touched Kate's back as the two met with the clinic's staff members and volunteers. As Brown explains, "He's clearly showcasing her and she's loving it. His arm is behind her while his other hand is gently pointing her way. Her head is leaned back soaking it all in. She may be laughing a bit as well, so they're having a good time."

For the visit, Kate chose to wear a very bridal-esque white lace Catherine Walker scallop-edge coat dress, which seems like a conscious choice, given that she was visiting her former wedding venue. However, though she and Will seemingly said a lot through their clothing and body language, the couple has said very little regarding Meghan and Harry's interview, which aired on March 7.

One of the most shocking revelations from the interview was when Meghan revealed the royal family had conversations about "how dark" Archie's skin tone would be and how it might have affected his lack of royal title and security. During a visit to a school in Stratford, London, on March 11, just a few days after the interview aired, Will and Kate were confronted by the press and asked about the racism accusations. Will's response: "We are very much not a racist family." Not great.

Though initially Will and Kate's body language following the interview looked a bit tense, it seems the Cambridges are now putting up a united front, which is, of course, their job. Hopefully these two will continue to lean on each other as they contend with the issues that have plagued the royal family for far too long.