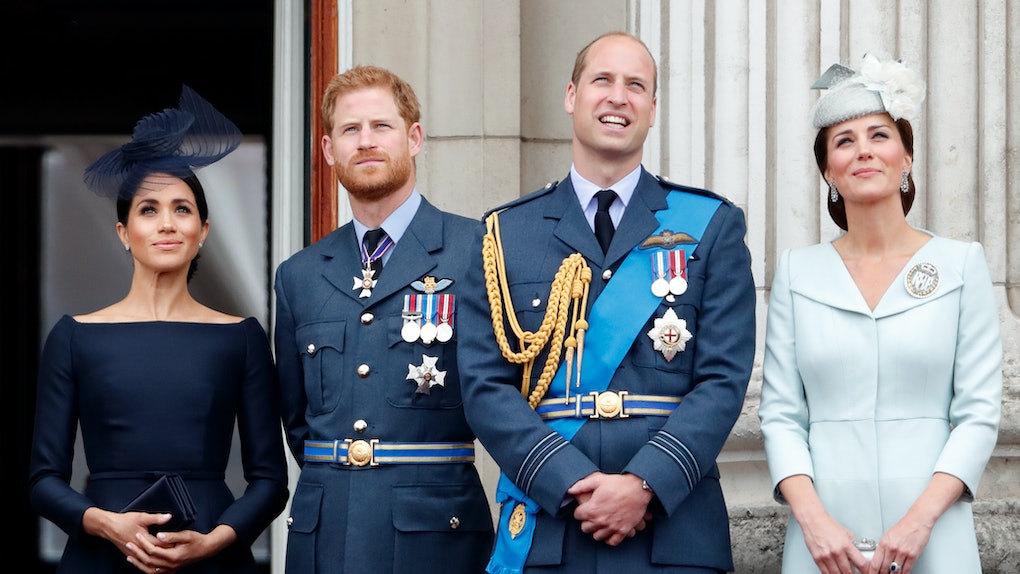 Days after Prince Harry and Meghan Markle sat down with Oprah for a juicy bombshell interview, reporters finally caught up with Prince William to get his reaction to what they said. During the two-hour long chat, Harry recalled Meghan facing racism from the press, and nobody from his family publicly defending her. The Duchess also revealed the royal family had conversations about "how dark" their future child would be and how it might affect whether he received a royal title or security. Wait until you hear Prince William's response to Meghan and Harry's Oprah interview because it's a lot to take in.

For the first time since the interview premiered on March 7, Prince William and Kate Middleton stepped out in public on Thursday, March 11 to visit a school in Stratford, London. When William was confronted by a reporter who asked, "Is the royal family racist?" he took the opportunity to issue a blanket denial. "We are very much not a racist family," the Duke of Cambridge said. The reporter also asked William if he had contacted his brother after the interview, and he responded, "No, I haven't spoken to him yet, but I will do."

Watch William's statement to reporters about Harry and Meghan's interview below.

Supporters of the couple were frustrated William didn't directly address the couple's issues and experiences.

Just a few days before, the Palace also released a statement about the couple's claims, although it also did not address Meghan and Harry's issues directly. "The whole family is saddened to learn the full extent of how challenging the last few years have been for Harry and Meghan," the statement read. "The issues raised, particularly that of race, are concerning. While some recollections may vary, they are taken very seriously and will be addressed by the family privately. Harry, Meghan and Archie will always be much loved family members."

Meghan and Harry's claims were not something to take lightly, which is why their supporters wanted a more direct and serious response from the royal family.

On Tuesday, March 16, fans received an important update about Meghan and Harry's relationship with the royal family following their interview. CBS This Morning co-host Gayle King, who attended Meghan's baby shower in February 2019, said she checked in with the couple recently and found out Harry is trying to reconcile with his family. "It's true, Harry has talked to his brother and he has talked to his father, too," King said. "The word I was given was that those conversations were not productive, but they are glad they have at least started a conversation."

Hopefully, they can make up soon because this drama has weighed heavily on everyone involved for far too long.

More like this
Meghan Markle & Prince Harry's Beef With The British Tabloids, Explained
By Brandy Robidoux
Meghan & Harry's Statement About Prince Philip's Death Is Simple, But Moving
By Sydney N. Sweeney
Prince Harry's Instagram Tribute To Prince Philip Comes Straight From The Heart
By Michele Mendez
Stay up to date