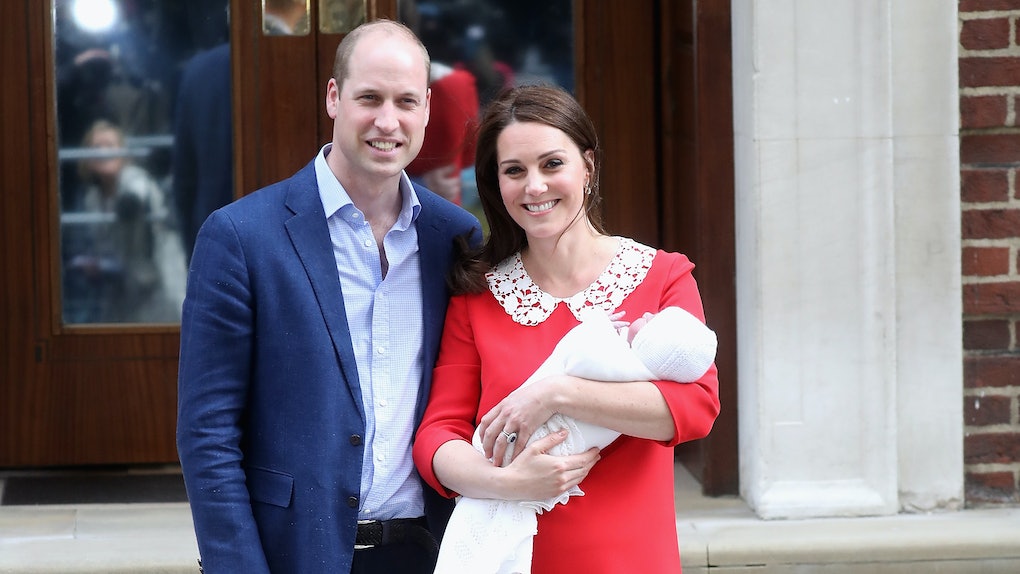 The world was elated when, on April 23, Prince William and Kate Middleton, Duke and Duchess of Cambridge, welcomed their third child into their family — a son named Louis. While there have been a few photos of little Prince Louis of Cambridge shown to the public, we sadly haven't been overloaded with cute baby photos just yet. But it looks like we'll finally be seeing the littlest royal in our near future, because Kensington Palace has released Prince Louis' christening service details, and it's coming up quicker than you think.

Their Royal Highnesses The Duke and Duchess of Cambridge are pleased to announce that the christening of Prince Louis will take place on Monday 9th July at The Chapel Royal, St. James’s Palace, London. Prince Louis will be christened by The Archbishop of Canterbury, the Most Reverend Justin Welby.

You hear that, everyone? We're only a few weeks away from Prince Louis' christening, which takes place on a very important day (the day after my birthday, in case you were wondering), so we'll be seeing the little guy make another debut real soon.

And if the name Justin Welby sounds familiar to you, that's because he's the man who officiated the royal wedding of Prince Harry and Meghan Markle on May 19. While Welby didn't preside over Prince William and Kate Middleton's wedding back in 2011, he did officiate the christenings of Prince Louis’ older siblings, Prince George of Cambridge, 4, and Princess Charlotte of Cambridge, 3. Basically what I'm getting at is the guy seems pretty busy to me.

But back to Prince Louis: We sadly won't be able to witness the royal christening service publicly (it's a private event, because obviously), but Entertainment Tonight reports that the royal family "typically appears before the cameras on the way into and out of the chapel," adding that, "Traditionally, official portraits from the ceremony are also released," meaning we should still get to see a few snapshots of Prince Louis' big day.

The last time we were #blessed with an updated photo of Prince Louis was on May 5, in a portrait taken by Kate Middleton that shows older sister Princess Charlotte kissing her younger brother on her third birthday. The photo was uploaded to Kensington Palace's Instagram account with a caption that read:

In case one incredibly adorable photo of Prince Louis isn't enough for you, Kensington Palace released a second solo image of the young royal. Taken on April 26, the image was released on Twitter with a caption that read, "The Duke and Duchess would like to thank members of the public for their kind messages following the birth of Prince Louis, and for Princess Charlotte’s third birthday."

STOP IT WITH ALL THE CUTENESS, LOUIS.

If royal babies are totally your thing (because why wouldn't they be?), you'll be pleased to know that Prince Louis is not the only royal baby in the family anymore. Zara Tindall, who is Princess Anne's daughter (who is Queen Elizabeth's daughter, FYI), welcomed her daughter into the world along with her husband, Mike Tindall, on Monday, June 18, meaning there are now two little royals who will be running around soon enough instead of one.

While Tindall's daughter *probably* won't be making her appearance at Prince Louis' christening, I'm still getting pretty pumped at the aspect of seeing our littlest prince in his Sunday best.